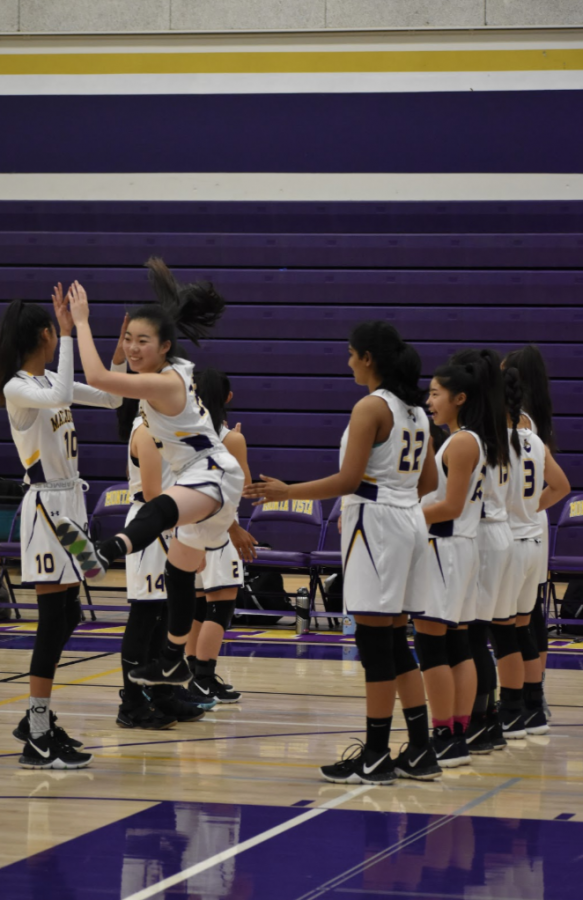 Senior Jocelyn Chang jumps up and high fives her teammate in their warm up lines as they get set to play Santa Clara HS in their home opener. Photo by Anish Vasudevan

he MVHS varsity girls basketball team began their season with a victory against Santa Clara HS: 40-35.

The Matadors were the first on the board as Senior Daphne Lam knocked down a baseline jumper to put MVHS up 2-0 early in the first quarter. Following, junior Katerina Baxter and sophomore Siri Adusumilli each scored a pair of baskets to bring the score to 10-5 at the end of the first quarter.

Throughout the first half, MVHS pressured their opponents constantly, causing turnovers that led to transition baskets scored by players like junior Kelli Kosakura. Entering halftime, the Matadors had a 23-7 advantage over the Bruins, but their lead wouldn’t last long.

With the second half underway, the Matadors did not come out with the same defensive intensity as the first half and they opened the door for SCHS. Senior Ashley Liu was flagrantly fouled in the third quarter, but she proceeded to miss two free throws in a row, helping the Bruins get back into the game. SCHS was able to cut down the deficit by five points to the Matadors late in the fourth quarter, but there was not enough time left to complete the comeback. MVHS held on to win the game 40-35.