Out of the loop

Schoology slotted to replace School Loop by next Fall 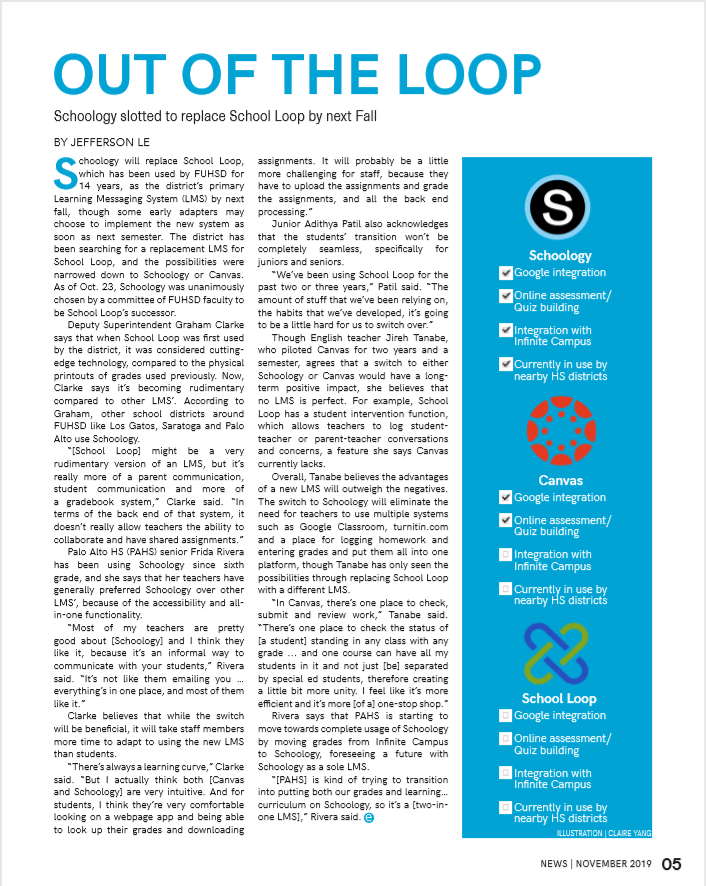 Out of the Loop Page Design.

Schoology will replace School Loop, which has been used by FUHSD for 14 years, as the district’s primary Learning Messaging System (LMS) by next fall, though some early adapters may choose to implement the new system as soon as next semester. The district has been searching for a replacement LMS for School Loop, and the possibilities were narrowed down to Schoology or Canvas. As of Oct. 23, Schoology was unanimously chosen by a committee of FUHSD faculty to be School Loop’s successor.

Deputy Superintendent Graham Clarke says that when School Loop was first used by the district, it was considered cutting- edge technology, compared to the physical printouts of grades used previously. Now, Clarke says it’s becoming rudimentary compared to other LMS’. According to Graham, other school districts around FUHSD like Los Gatos, Saratoga and Palo Alto use Schoology.

“[School Loop] might be a very rudimentary version of an LMS, but it’s really more of a parent communication, student communication and more of a gradebook system,” Clarke said. “In terms of the back end of that system, it doesn’t really allow teachers the ability to collaborate and have shared assignments.”

Palo Alto HS (PAHS) senior Frida Rivera has been using Schoology since sixth grade, and she says that her teachers have generally preferred Schoology over other LMS’, because of the accessibility and all- in-one functionality.

“Most of my teachers are pretty good about [Schoology] and I think they like it, because it’s an informal way to communicate with your students,” Rivera said. “It’s not like them emailing you … everything’s in one place, and most of them like it.”

Clarke believes that while the switch will be beneficial, it will take staff members more time to adapt to using the new LMS than students.

“There’s always a learning curve,” Clarke said. “But I actually think both [Canvas and Schoology] are very intuitive. And for students, I think they’re very comfortable looking on a webpage app and being able to look up their grades and downloading assignments. It will probably be a little more challenging for staff, because they have to upload the assignments and grade the assignments, and all the back end processing.”

Junior Adithya Patil also acknowledges that the students’ transition won’t be completely seamless, specifically for juniors and seniors. “We’ve been using School Loop for the past two or three years,” Patil said. “The amount of stuff that we’ve been relying on, the habits that we’ve developed, it’s going to be a little hard for us to switch over.”

Though English teacher Jireh Tanabe, who piloted Canvas for two years and a semester, agrees that a switch to either Schoology or Canvas would have a long-term positive impact, she believes that no LMS is perfect. For example, School Loop has a student intervention function, which allows teachers to log student-teacher or parent-teacher conversations and concerns, a feature she says Canvas currently lacks.

Overall, Tanabe believes the advantages of a new LMS will outweigh the negatives. The switch to Schoology will eliminate the need for teachers to use multiple systems such as Google Classroom, turnitin.com and a place for logging homework and entering grades and put them all into one platform, though Tanabe has only seen the possibilities through replacing School Loop with a different LMS.

“In Canvas, there’s one place to check, submit and review work,” Tanabe said. “There’s one place to check the status of [a student] standing in any class with any grade … and one course can have all my students in it and not just [be] separated by special ed students, therefore creating a little bit more unity. I feel like it’s more efficient and it’s more [of a] one-stop shop.”

Rivera says that PAHS is starting tomove towards complete usage of Schoology by moving grades from Infinite Campus to Schoology, foreseeing a future with Schoology as a sole LMS. “[PAHS] is kind of trying to transition into putting both our grades and learning… curriculum on Schoology, so it’s a [two-in- one LMS],” Rivera said.