Local residents experience what life is like for low-income families 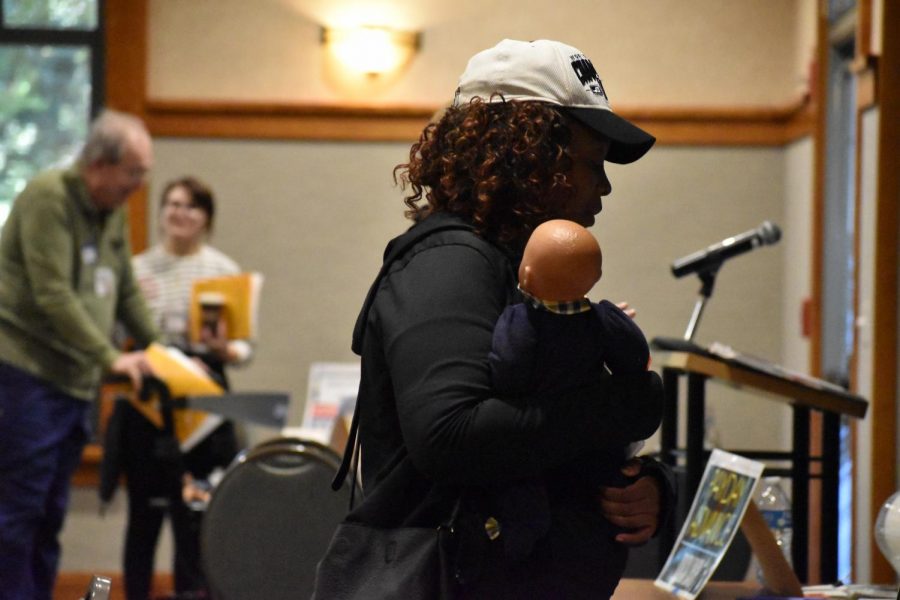 Participants with a baby were required to pay double the transportation fees in the simulation.

Residents of Cupertino took on the roles of individuals with low socioeconomic status to experience struggles people in poverty work to overcome daily. The poverty simulation, sponsored by West Valley Community Services and Step Up Silicon Valley a group focused on reducing poverty, was held at the Cupertino Senior Center from 10 a.m. to 12 p.m. on Nov. 2.

Other sponsors of the event included Rebuilding Together, Second Harvest of Silicon Valley, the YMCA and Cupertino City. At the event, participants had a glimpse of what low-income families faced via experiencing specific stressful situations such as living off $100 a month, getting evicted and fired from a job. Afterwards, participants were asked to converse with others in a focus group and reflect upon the simulation.

Upon entering and signing waivers, participants were assigned a name tag designating their name, age, race and address. They joined others assigned to their family — groups that consisted of single parents, orphans and larger families. The simulation included a month of experiences, with 10 to 15 minutes dedicated to each week. At the beginning of the first week, each family was given a family profile, transportation passes, fake cash, an Electronic Benefits Transfer (EBT) card and picture cards representing belongings. However, some families did not get all these resources due to their initial circumstances.

Around the perimeter of the room were tables representing resource centers — including a pawnshop, bank, Child Protection Services, Community Action Agency, employment center and fast cash center. Participants came to these tables for help and information to survive for four weeks.

After the participants reflected in their groups, speaker Sherel Hayes spoke about her past experiences living in poverty and at a homeless shelter. Hayes believes the lack of knowledge about service employees such as housekeepers, gas attendants and teachers in Silicon Valley can be somewhat amended by showing residents “what it’s like living paycheck to paycheck.”

“I think [these simulations] teach you, you have to go through the experience,” Hayes said. “But one day doesn’t do it. Go through a year or two. Go through it and it really touches you, but I guess you have to do the best you can with what you have.”

Lilly also agrees that the simulation is not perfect, but she believes it helps initiate a conversation about poverty. Lilly has been involved in these poverty simulations for almost 11 years, and originally started implementing them after learning about them at one of the Catholic Church’s annual meetings. There she was inspired to buy a kit for Catholic Charities.

“Since that time two other agencies in our Valley have also purchased kits: Sacred Heart Community Services and Downtown Streets Team,” Lilly said. “There were years where we did between 10 and 15 a year. Now we’re not doing that many, maybe four to six. But we’re happy we own the kit and we’re happy to keep using this.”

Lilly believes that the simulation can also be more effective than other methods in inspiring people to act in addition to raising awareness about the issue of poverty.

“We can publish facts about poverty, but that doesn’t necessarily help people change their minds,” Lilly said. “But when your heart is touched, when you hear a personal story, or when in this simulation, you get a sliver of a taste as it were, of the stress of living in poverty.”

Selo also thinks that the simulation is effective in replicating similar emotions that those of low-income families feel. Specifically, the simulation draws in people who are already aware of the problem but lack proper education on the matter.

“I also want to be clear that the poverty simulation is not [an] anywhere near exact replication of what it means to be living in poverty and any assumptions that it is [are] actually completely unfair to our clients,” Selo said. “It’s only meant to approximate the experience … the horrible experience our clients are facing when they’re finding themselves struggling to make ends meet.”

When participants begin realizing the hardships that come with financial struggles, a popular response is making donations to homeless shelters in the form of money or daily necessities.

“You can donate or gather up clothing [and] food and go to the nonprofit and have them distribute it for you,” Hayes said. “Socks are very much needed for [the] homeless, and toothbrushes and everyday things that people need.”

However, Hayes believes that there are more effective ways to help those living in poverty — especially for high schoolers.

“Going to a nonprofit and helping, I think that helps more than giving somebody money off hand,” Hayes said. “If you educate yourself on what they need, go to the nonprofit and they can show you better than just giving people money all the time on the streets. That’s a better way.”

Lilly agrees with Hayes’s prioritization of education in order to properly help people in need and create a bigger impact. Lilly herself maintains the need to always be ready to assist those around her.

“I’m very uncomfortable with the disparity of wealth in our country,” Lilly said. “And as a middle class person, I need to keep my eyes and ears open and my heart open to struggles that my neighbors have.”

A struggle many community members deal with in Silicon Valley is housing, which highlights Lilly’s discomfort regarding socioeconomic gaps. Selo attests that technological companies have invested in the development of affordable housing, but it is not enough.

“On the ground, we still have a lot of pushback from community groups,” Selo said. “For people who are concerned about those developments in their communities, housing is really at the crux of the crisis we’re seeing in Silicon Valley right now. And until we can begin to get beyond people’s discomfort with affordable housing, we will be able to address the root causes of our crisis.”

In response to technological corporations’ power in Silicon Valley, Selo urges students to step up and use their own power as the market of those companies in order to effect meaningful change for housing.

“You can reach out to tech companies and encourage them to be responsible stewards of our community and reinvest in the development of affordable housing and services to low-income and homeless individuals in our communities,” Selo said. “I think as young people [who] are significant consumers of technology, you have a voice that is very important to those companies, and you could raise your voice, asking them to take a more active and engaged role in addressing the problem.”

In addition to Selo’s appeal to the youth voice, Lilly wants teenagers to gain a compassionate mentality in the process of learning about the world through standing up to local issues.

“Especially as young people, you’re seeing that you have to go out into the world and go to school, but also make a livelihood and live in a sustainable way,” Lilly said. “And this is part of that. I think that it also helps us not just have a ‘me against the world’ — that I will accumulate all that I can, I will take care of me and my family — but a greater sense of community, a greater sense of us. We care for one another.”