Examining substance use at MVHS 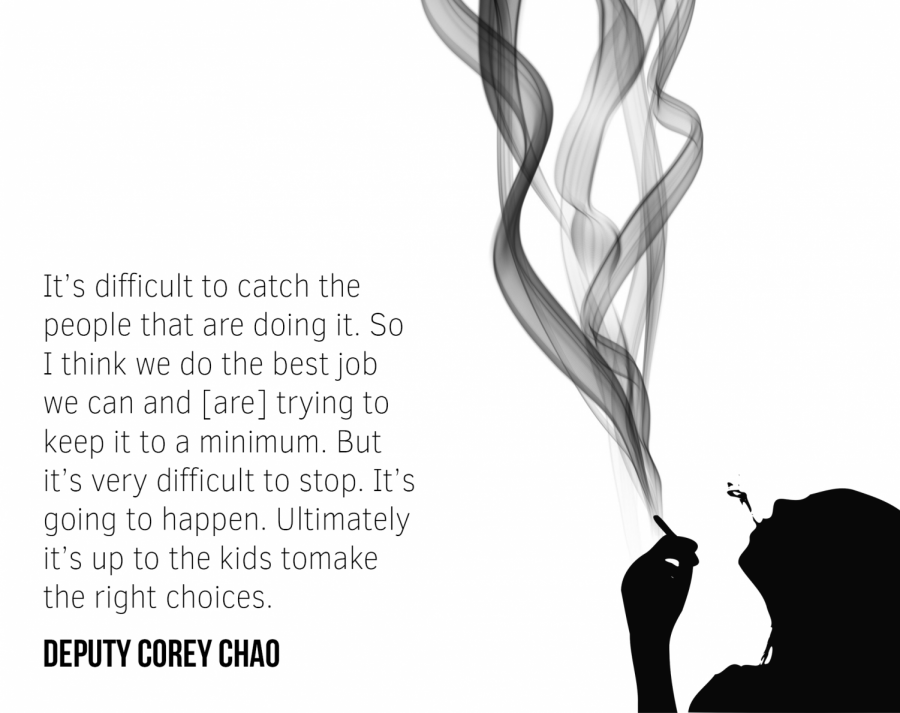 *All students whose names begin with “H” are anonymous in order to protect their identities.

It was his freshman year, and he was talking to someone he liked. When she said that she smoked weed and invited him to join her, he did. He recalls thinking that the experience wasn’t that bad, and began smoking every couple of months for the next two years. Now, he does it whenever he’s bored.

Humphrey claims that it isn’t hard to obtain drugs for someone who knows the right people. School resource officer Deputy Corey Chao also acknowledges that substances are relatively easy to obtain and are prevalent among students.

“It’s everywhere,” Chao said. “I have a kid in high school and he tells me there’s people vaping in the bathrooms and I know it’s happening here too because I hear from the staff. But it’s difficult to catch the people that are doing it. So I think we do the best job we can and [are] trying to keep it to a minimum. But it’s very difficult to stop. It’s going to happen. Ultimately it’s up to the kids make the right choices.”

According to Humphrey, one reason that identifying substance users and distributors is so difficult is because students actively cooperate to avoid law enforcement.

“I would say it’s because people really good at staying away and I know some people have this police radio so you can just listen,” Humphrey said. “And so they know where [the cops are] at, sometimes they’ll be like, ‘Oh, there’s cops on the other side of town, watch out,’ so people basically watch out for each other.’”

When Chao was a teenager, he observed teenagers requesting older siblings to purchase substances that they could sell. He sees that this method still exists, but now, the internet and social media play a larger role in teenagers’ ability to obtain substances.

MVHS student Hyacinth has done weed before, and finds that the most effective way to obtain substances is through Snapchat.

“There’s dealers at our school, many of them, and they’ll make private stories where they post about it,” Hyacinth said. “So basically you have them on Snap[chat], and it’s kind of known that they’re a dealer, and you just text them and they’ll tell you what they have and the prices and then you just pay.”

Though not a dealer himself, Humphrey has friends who sell substances and estimates that they could earn $50 to $200 a day. However, he doesn’t believe that an average person can support themselves through dealing alone.

“It’s very iffy — I don’t think you can say, ‘Oh I want to start doing this as a job,’” Humphrey said. “I don’t think you’d really be able to, so I think it’s tricky. [Dealers] usually have a main job and they do it on the side for extra cash.”

Distribution of substances, however, has legal consequences. Although possession of illegal substances by minors counts as a misdemeanor, distribution is considered a felony. According to Legal Match, a felony is generally punishable by imprisonment for longer than a year in a federal facility.

Chao has seen various reactions from teenagers he has caught, with around half of them being remorseful and realizing they shouldn’t be doing it, and the rest not caring and continuing to deal and use substances anyway.

“It’s all about if you make the right choices, and my job as a school resource officer is [to] help guide and direct people in the right direction and let them know what can happen if they continue on the path [they are on],” Chao said. “You can bring a horse to water, but you can’t make them drink. Ultimately we try to do our best to steer them in the right direction to make the right choices. But it doesn’t always work for everybody, unfortunately.”

Hyacinth has taken the time to evaluate her life choices and how they have contributed to some shallow relationships simply based on doing drugs together.

“I realized that when I was smoking and doing drugs, it wasn’t just affecting me as a person — I wasn’t just high, but the people I was around, we were only friends because we were all high together,” Hyacinth said. “It wasn’t an actual friendship.”

After getting caught by the police in August, Hyacinth chose to go through a year of probation rather than being charged with a drug offense. Because of this, she has to do drug tests once a week and participate in drug therapy sessions every other week where she talks about her experiences with drugs with others.

“It’s scary because there’s some interesting and sad stories that you hear,” Hyacinth said. “It’s like, I don’t want to be that person, and there’s still always that temptation where it’s like ‘I’m going to do it and I’m going to be fine.’ … [The classes] kind of scare me not to do it.”