Exploring the effect that language has on relationships 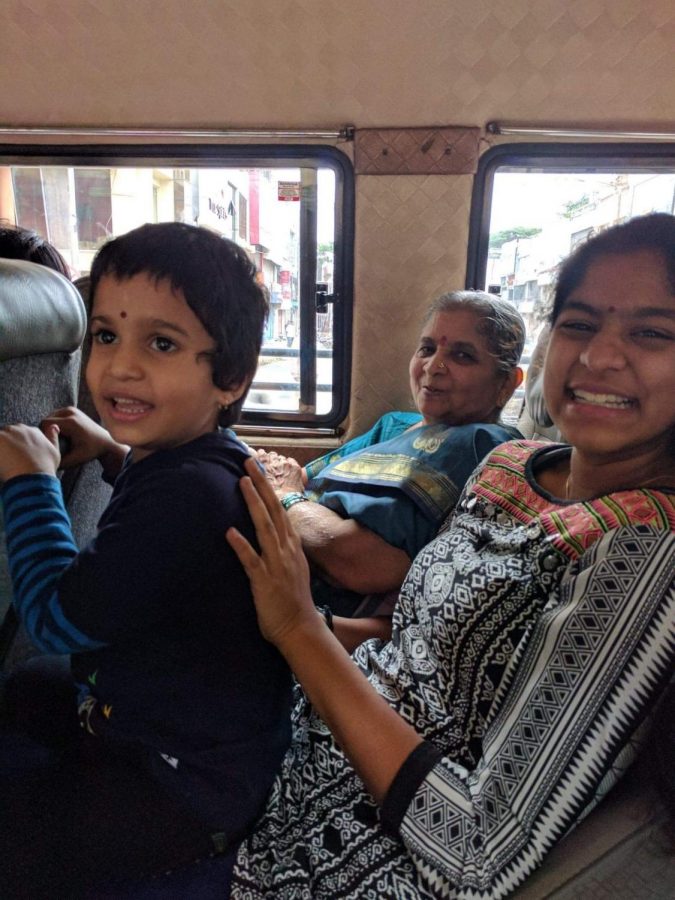 Konanoor smiles while taking a photo with her family in India. Photo used with permission from Siri Konanoor.

ith a variety of languages commonly spoken across the Bay Area, the bustling chatter at a supermarket merely comes off as gibberish. For the receivers, however, the conversations are filled with meaning, with their emotional impact differing from person to person.

Sitting in front of her TV, with her partner, is French teacher Sarah Finck. To an outsider, the conversation is hard to follow. Bits and pieces are French, but most is spoken in English.

“Sometimes if I’m telling a story from the classroom, and I’m talking about what somebody said, then we might sort of shift into French or we’ll watch a video in French and talk about it,” Finck said. “And then we trickle back to English. So it’s kind of random.”

While Finck and her partner are both comfortable speaking both languages, they generally speak English more often because her partner, who moved from France, wants to practice it. Furthermore, because of the bilingual nature of their relationship, occasionally, the differences between French and English are humorously showcased in conversation.

Although not French herself, after spending several years digesting the language, and traveling to France, she eventually became fluent in French. Through her mastery of the language, she is able to understand her boyfriend on a deeper level, transcending the ease of communication.

“I’m aware of French ways of being and thinking,” Finck said. “I value it as an additional means of communication and an additional culture, and it’s given me access to other parts of the world. I’ve spent a lot of time in France and I’m able to communicate, for example, with my boyfriend’s family, there’s no issue and so I can know not only the language and communicate with them, but know their ways of living and, and it that cultural knowledge really allows me to be more flexible and fluid in different situations.”

After living in India for 12 years, junior Siri Konanoor moved to America to be closer to her older sister, who was soon starting college in Illinois. She had to leave behind the familiar bustling streets, family and close friends. In an effort to retain her culture, she makes a deliberate effort every day to speak her family’s native tongue, Kannada, a language predominantly spoken in southwestern India.

Since her school in India prioritized learning English over Kannada, Konanoor is not fully fluent in the language. However, because her ability to speak Kannada ties into her relationship with her grandparents, it is essential that she retain it to avoid any language barriers. She recalls an experience when her cousins from Maryland came to visit India, and their difficulties speaking the native language.

“Every time [my cousins] visited India, they struggled to speak in Kannada, and they only spoke in English, my sister and I, we would look at each other and we would silently judge them,” Konanoor said. “‘Look at them. Our grandparents like us better because we can speak Kannada. Look at those American girls.’”

Since Konanoor is able to communicate with her grandparents in their native tongue, it not only makes communication easier but also strengthens the bond between them. Konanoor also notes that it is through Kannada that she can remember her cultural identity.

“I’m so focused on my life here that sometimes I forget, you know,” Konanoor said. “And I think [Kannada is] just a reminder that I am from my family. I lived in a city called Bangalore and I am that Bangalore girl. And it’s just a way for me to feel grounded and not lose touch of where I really come from.”

For junior Naomi Yin, Chinese was always the dominant language at home. Never going to Chinese school limited her Chinese skills to only speaking and listening, until her parents forced her to enroll in Chinese during high school.

Since Yin is not fully fluent in the language, she has experienced a few instances of communication struggles with her grandmother, who does not speak English. According to Yin, without the right words to say, a conversation in Chinese could end up as a brief game of charades.

“If I just didn’t speak Chinese, there’d be a lot more hand gestures and my grandma would not understand any of them,” Yin said. “I’ve forgotten words in Chinese, right? So then I tried acting it out — didn’t work.”

From Yin’s perspective, Chinese is ultimately just a form of communication. Furthermore, Yin would actually prefer it if her parents only spoke to her in Chinese because it would be easier for her to comprehend.

“I feel like Chinese is just another language I speak, but I’m not really gaining or losing anything from it,” Yin said. “And it hasn’t really impacted me very much.”