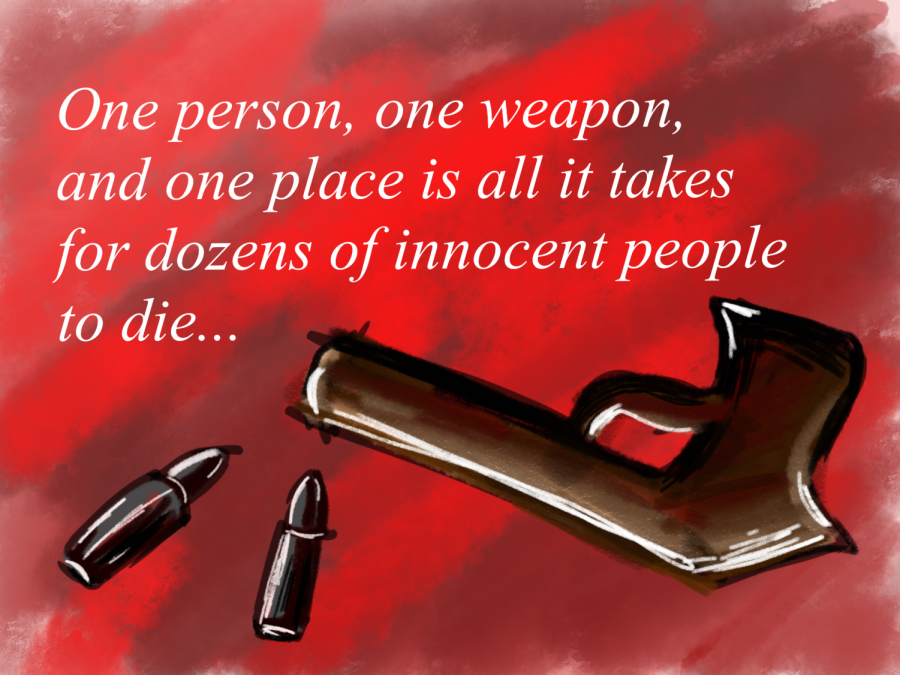 One person, one weapon, and one place is all it takes for dozens of innocent people to die | Graphics by Rachel Jiang

ne person, one weapon and one place is all it takes for dozens of innocent people to die. Since 2018, the frequency of school shootings has increased more than twice as much compared to the year before, according to the Center for Homeland Defense and Security. What used to be a safe place for students to learn ended up being one of the most likely places for a shooter to make their move.

For Ben Clausnitzer, the MVHS principal, school shootings, though not as relevant to MVHS, are something to take into account in case of an emergency.

The first school shootings emerged in 1999 with the Columbine shooting, which resulted in 13 deaths. In order to prepare for an event where there is an active shooter on campus, MVHS students annually practices run, hide and defend drills to ensure students’ preparation for the worst.

However, despite these safety practices being implemented throughout the U.S., victims from gun violence have drastically increased from 19 per year to 174 per year between 2010 and 2018, according to the Center for Homeland Defense and Security. Due to this, retailer companies like Skyline USA, Bullet Blocker and Guard Dog Security have taken matters into their own hands by creating bulletproof backpacks, which are backpacks with a built-in panel made of Kevlar fabric to deflect gunshots. According to CNN Wire, demand for these new items has increased by 200 percent in the last few years.

Freshman Irene Chon was disappointed after finding out about bulletproof backpacks because she thought it was unfortunate that parents felt the need to resort to buying this product just to protect their children at school.

“I don’t really support it because it just highlights how bad [gun violence] is,” Chon said. “But I guess I can see why people can support it for their children’s safety.”

Guidance counselor Monique Balentine has a similar impression of bulletproof backpacks, seeing them as an unpleasant indicator of our country’s gun violence.

“It’s more sad than anything that people are capitalizing on horrible things that are happening in the world,” Balentine said.  “If as a nation we had better gun control and laws then we wouldn’t need bulletproof backpacks.”

While Balentine observes our national gun violence as the reason behind the product, senior Calton Kong believes that money is a driving force to selling these backpacks.

“[Bulletproof backpacks are] just a product of capitalism as in based on situations that have been created by our government,” Kong said. “They are taking advantage of it by capitalizing on people’s fear and in people’s easy access to … guns.”

Understanding that these backpacks cost on average $160, Kong believes that private corporations that create this product are only incentivized by money, and not actually driven by a desire to increase the security at schools. 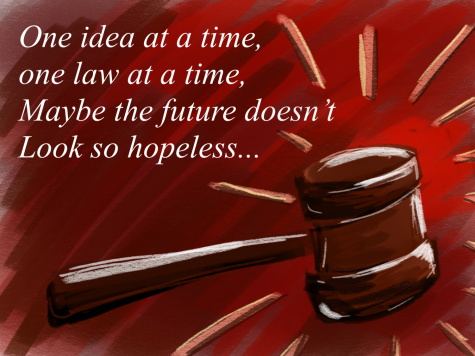 One idea at a time, one law at a time, maybe the future doesn’t look so hopeless | Graphics by Rachel Jiang

While Kong does not support either the bulletproof backpacks or the companies that make them, Clausnitzer believes there is no definite answer as to whether they are helpful or not in terms of eliminating gun violence. On one hand, these backpacks may be seen as a way to make the students safer. On the other hand, however, he is not convinced that they are solving the root cause of gun violence.

Clausnitzer describes the invention of bulletproof backpacks as a way of taking a temporary approach to tackling the issue, but not a permanent solution to stopping gun violence.

“If there is an event, being able to protect yourself and have safety measures might make sense, right?” Clausnitzer said. “But there’s a reality to addressing the issues being proactive versus reactive and I tend to — not just this issue, on many issues — try to get at not just trying to be reactive, but trying to think about being proactive.”

In order to take a proactive approach to the issue of school shootings, Clausnitzer believes that raising awareness and talking about the potential solutions will allow new approaches to combating gun violence. For example, he suggests that taking the issues to the legislation so they can make decisions is a suitable approach to reforming gun laws.

At the end of the day, although bulletproof backpacks are just a temporary way to minimize the severity of shootings and not to prevent them. However, the U.S. is currently taking small steps in attempts to completely rid of gun violence. One idea at a time, one law at a time, maybe the future doesn’t look so hopeless.