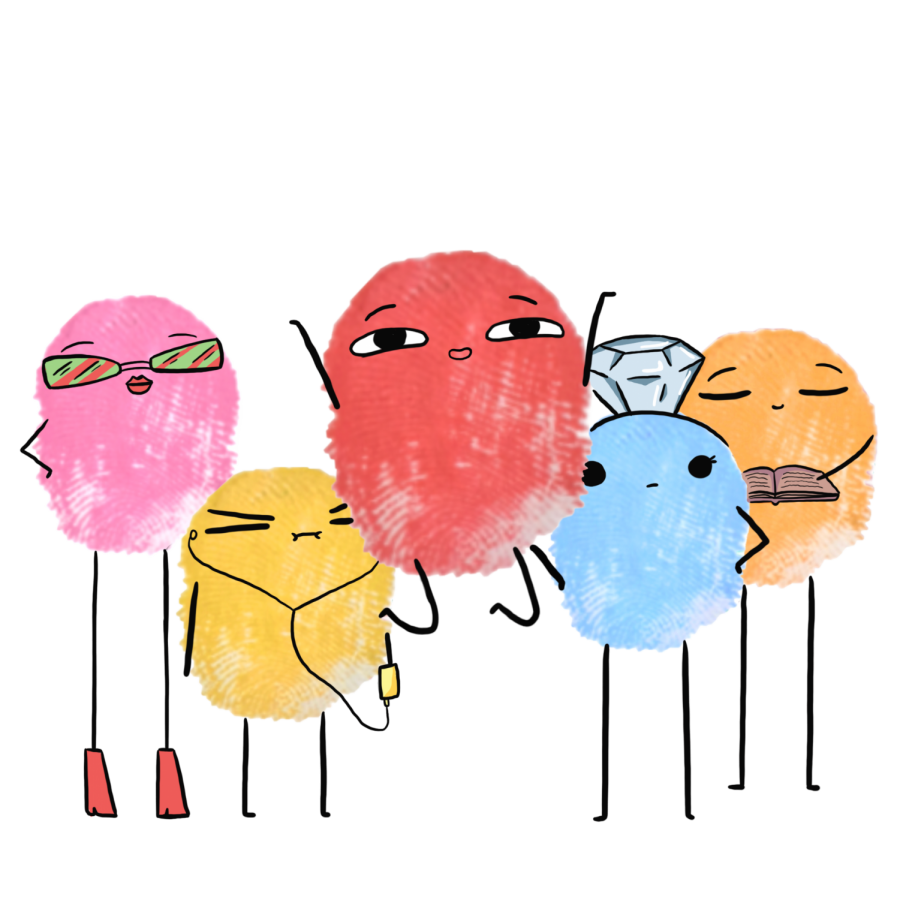 Comic illustration of the five finger print characters of Thumbpaint. By Brett Park | Used with permission.

Ayah Ali-Ahmad
fingerprint is something unique to each individual — not one is identical to the next.

Thumbpaint is an Instagram comic account that senior Brett Park started in November of 2017. Since his first post, which features the account’s main character, Thumb, Thumbpaint has gained over 175,000 followers as well as sponsorships from large companies like Pentel. To get there, Park has published weekly comics, has created merchandise and has become a part of a large community including his followers and other comic artists   on Instagram.

Park started with acrylic paint and an index card. In almost every post, Thumb is featured in either a humorous and relatable situation or is paired with a more serious message.

Park didn’t intend for Thumb to be a representation of himself or his beliefs, and started with nothing particular in mind about the kind of content he wanted to make. But as the account grew and began to reach a larger audience, Park shifted his content in hopes of using his platform to spread messages of positivity. This, in turn, shaped the simplicity of the brand and its continuation of solely featuring the same  thumbprint scan.

“As the account grew, I realized that it might have been more powerful if I shared myself in it a bit more and shared my story through Thumb, [and tried talking] about racial inequality and body positivity,” Park said. “I wanted something that’s always familiar to everyone, especially because Thumb was supposed to be something that everyone can relate to … With finger painting, I feel like we’ve all done that when we were kids, and so I thought there was some underlying beauty in doing things really simple and making [the art style] like I would as a kid.”

Art teacher Brian Chow, who has taught Park’s Art 1 and 3 classes, recognizes that branding through the use of thumbprints is a way to recognize Thumbpaint.

Chow explains that, although not necessary, the best way to grow on social media is by staying relevant and recognizable, which he says Park does well through the repetition of the familiar thumbprints. Chow sees this similar to how Nike and Adidas have made themselves recognizable by many through merely  a symbol.

“It’s very smart that he has a very specific curation of his brand — there’s no deviation from it, it’s super consistent,” Chow said. “Part of building a brand is consistency and to be known. Now, when you see these little thumbprints, you’ll know it’s his work.”

Running the account for the past two years and uploading weekly in the hopes of pleasing his followers has brought Park to what he calls “creator’s block.” One way he has countered this is with his recent introduction of four new fingerprint characters. This idea came from one of his late-night 2 a.m. spontaneous thoughts and his Notes app.

After brainstorming a list of ideas on the app, Park selects the ones that he thinks his followers will like. Part of how he determines this is by looking at the number of likes on specific posts, as well as when his followers increase around a certain period of time.

“I kind of used the analogy where I’m the driver of the car, but I don’t have control over the direction,” Park said. “[My] posts help some kid out there in the world just to laugh a bit, but then maybe my more serious posts help another person realize something about themselves. It’s kind of just finding a balance between being the driver of my own car, but then also navigating the path that they kind of choose for me.”

The partial control that Thumbpaint’s followers have on its content is an example of the superficial nature of Instagram according to Park. In order to hit his goal of 50,00 followers, he published triweekly comics, but later realized that he didn’t gain anything beneficial by focusing on the numbers. Now that he is more self-aware of the impact this mentality has had on him, he tries to not focus on numbers as much anymore.

“I want to be that person that’s like ‘I don’t care about followers,’ but it really kind of messed with me a bit, and it still kind of does,” Park said. “When I post something, I’m always afraid to fail — if it doesn’t get enough likes or followers increase — because everyone can see your likes to followers ratio. It’s just something I always would obsess over, but I’ve grown more confidence in the message of Thumb, rather than how many likes he gets or the superficial nature of Instagram. I kind of just started posting what I wanted to post.”

Junior Jackie Chang has been following Thumbpaint since its debut in 2017, and before meeting Park or knowing he ran the account, she says it was one of the few comic accounts she followed on Instagram. As she scrolled through Instagram’s Explore page, Thumb stood out to her in the sea of other posts because she was impressed by the use of a physical trait made into a character.

“I think it’s really concise, and it’s really wholesome,” Chang said. “It’s really unique because his thing is a thumb, and I’ve never seen anything [like] that … I remember a year [after I first followed Thumbpaint], it was 10th grade, and [Park] posted a face reveal because he passed an amount of followers or something. I was internally shook.”

In the beginning, however, Park never intended to mix his online presence and his personal life. To accomplish this, he did not let his friends follow the account or tell his parents about it — Chang happened to be an exception having found the account on her own. As he has increased his following, additional people from his life have found the account, but Park says he’s OK with that now.

“I didn’t want my friends to know, I didn’t want it to become something else and have their influence in my comic, I just wanted kind of my own venting area,” Park said. “I just wanted it to be mine. But then, I thought if my message and this whole thing was to spread to multiple people, why am I just shutting these people in my real life out for the account? So, I told my parents after I had 30K [followers], because that’s when I felt like it was enough to be validated in their eyes, and then I was like now there’s no real consequences for letting my friends follow it.”

Park has created new friendships online through Thumbpaint by being in a Discord server, an online chatting service,  with over 300 artists from Instagram and eventually getting to talk to one of his biggest inspirations for the account, Ketnipz, a bean character with over 1.3 million followers.

As his life has become busier with college applications, Park has had to put larger projects for Thumbpaint on pause in order to focus on his school life. He says he is grateful for what he has experienced while running the account, making hundreds of relatable content and being able to talk to his followers and other creators. Through Thumbpaint, Park explains that he has found a platform to use his voice.

“I hope it does grow into something bigger than what it is now,” Park said. “I’m a first-semester senior. I really can’t do this right now because I barely have time to do one post a week, which I’m struggling with … I think I am at a wall creatively with Thumbpaint. But I definitely hope it grows into a bigger brand.”