The tale of the traveling mint plants: what flea extermination taught me about a change in routine 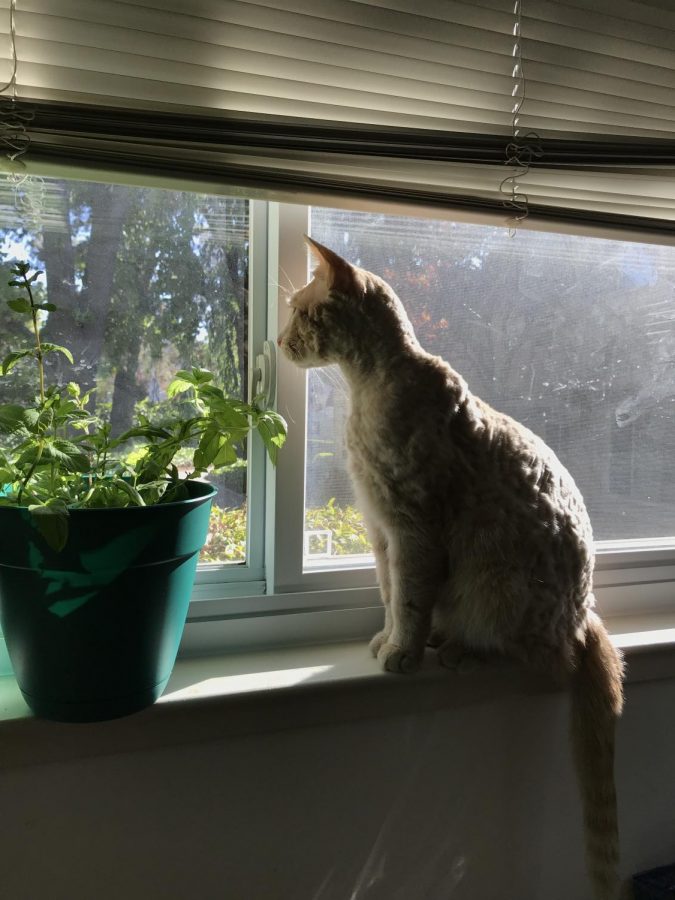 our potted mint plants spend around half the day perched precariously on the windowsill in the study. Then, once the sunlight fades and their space on the windowsill is filled by the pulled-down blinds, their locations shift to wherever it’s convenient — usually the nearby table and sometimes a balancing act on the printer.

Their scent is supposedly able to keep fleas away, which is why, after we found out our cat was infested with the delightful pests, my mom returned home from a trip to Home Depot with the said mint plants alongside supplies for flea extermination.

Initially, I wasn’t too pleased. I’ve never particularly liked the taste of mint, other than the occasional Thin Mint cookie — without sufficient chocolate, the flavor is too similar to toothpaste for my taste — so it came as a surprise when I found that I rather enjoyed the scent. Without much argument, I took a sprig my mom had plucked and handed to me, twirling the stem around as I breathed in the minty aroma.

But the mint plants didn’t do enough, or maybe they didn’t do anything at all. The following gruesome week consisted of being bitten by fleas, and scratching the bites, even when they no longer itched, but just for the sake of scratching, for the sake of some attempt to maintain sanity. I was desperate to have some degree of control over something, anything, as the uncontrollable fleas wreaked havoc.

And thus began the long, excruciating war. Our house, the battleground. Fleas, the unconquerable adversary. Insecticide and flea medicine, the weapons.

Yet, as much of a nuisance as it was, I actually didn’t mind the pest extermination experience too much. It meant I got to spend three consecutive afternoons at the library, which for me was an exciting prospect, considering how often I try to persuade my friends to walk there on our excursions. Another evening, when we were still airing out the house from insecticide, I opted to pull a plastic table and chair out of the garage to work by street lamplight, wistfully reminding myself that even if my house was full of poison, school work must go on — I still had a math quiz the next day. But even that wasn’t entirely necessary, since the garage was probably also a perfectly viable option with functioning electricity and lighting.

The thing is, what I enjoyed about it most was the change of pace. I believe I’m fairly tame as far as teenagers go. I prefer sticking to my routine, to normalcy, but at the same time, there’s something about breaking out of it that’s refreshing. Whether being able to look out the second-story library window while doing homework to noticing the sunset merging with the window reflection or having a mini garden of mint plants next to my desk, it’s different from what I’m used to, but it’s not bad.

When I came home today, the mint plants found a new home: now they’re on top of an old music stand back from when I used to play violin. I don’t have enough time to practice as much anymore, but the mint plants stay there, sitting patiently, stoic and unwavering, ready to be moved once the sunlight fades.