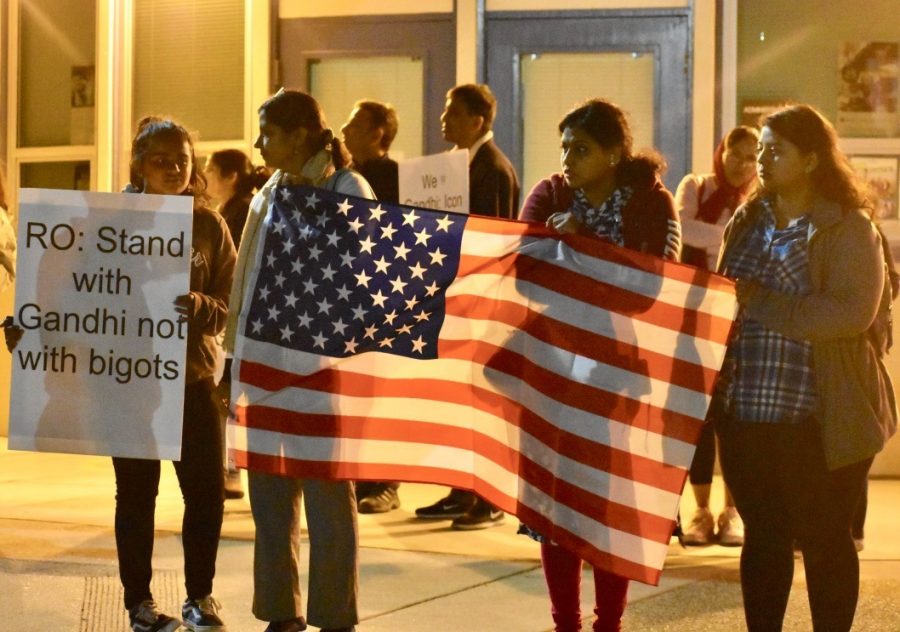 Members of the Hindu community protest against Khanna's alleged hypocrisy regarding his views on Gandhi.

This backlash against Khanna was sparked when he responded to a tweet by blogger journalist Pieter Freidrich, who has previously expressed anti-Gandhi views, according to the protesters. Freidrich tweeted about an article he wrote titled “All in the Family” — a piece detailing presidential candidate Tulsi Gabbard’s involvement with Indian Prime Minister Narendra Modi.

In his article, Freidrich claims Gabbard’s rise in U.S. politics is largely due to donations she received from American affiliates of the Rashtriya Swayamsevak Sangh (RSS) — the parent organization of India’s ruling Bharatiya Janata Party (BJP). The central beliefs of both institutions are heavily derived from Hindutva — a form of Hindu nationalism that demands the assertion of India’s national identity as a Hindu state and calls for members of minority religions, such as Islam and Christianity, to reconfigure their beliefs to fit with Hindu culture. In his tweet, Khanna noted the importance of the article and called on Hindu-American politicians to “reject Hindutva” and support and accept all religions.

The demonstrators protested against Khanna allegedly not supporting Hinduism and Gandhi — however, there was no mention of Gandhi in Khanna’s response to Freidrich tweet. Additionally, Khanna didn’t say anything negative about the Hindu faith in his Twitter response — instead, he specifically called on Hindus to reject Hindutva, a radical form of the religion. In their complaints of Khanna’s alleged hypocrisy, the protesters refer to an event Khanna held before the town hall meeting honoring Gandhi.

Important article. It’s the duty of every American politician of Hindu faith to stand for pluralism, reject Hindutva, and speak for equal rights for Hindus, Muslims, Sikhs, Buddhist & Christians. That is the vision of India my grandfather Amarnath Vidyalankar fought for.

“On the one hand, he’s having an event inside for Gandhi and on the other side, on social media, he’s actively supporting people who are anti-Gandhi, anti-India and people who have very clearly raised their voices against peace and India,” protester Khyatia Shetkar said. “That’s one thing that’s been bothering us as a community.”

After a protester questioned Khanna about his Twitter response during the town hall meeting, Khanna responded, explaining his reasoning in replying to Freidrich’s tweet. Khanna advocates for pluralism — a system in which multiple religions coexist.

“I responded to one of his articles saying that I believe in pluralism,” Khanna said. “There were a few groups in the community who got offended by that. I have no tolerance for right wing nationalists who are affiliating with Trump. And let me tell you something — they’re in an echo chamber, but their bigotry, their right wing nationalism, their support for Trump or for white supremacy is a minority. But they will see that our district is pluralistic and I have no problem standing up against them.”

Protestor Kaushal Varshney feels betrayed by Khanna because, as an Indian-American member of the 17th District, he supported Khanna in his 2016 election for a seat in the House of Representatives. After Khanna’s recent response to Frierich’s tweet, Varshney feels that Khanna is no longer supporting the Bay Area’s Hindu community.

“At a local level, [the] only thing we want him to know is that his actions are actually making our kids sad,” Varshney said. “We ourselves did a lot of campaign[ing] for him four years ago, so we are feeling cheated about this.”

Varshney is calling for Khanna to make a statement retracting the views he expressed in his tweet. Additionally, Varshney strongly disagrees with Khanna’s membership in the Congressional Caucus on Pakistan and Pakistani Americans. Khanna is the first Indian-American lawmaker to join the Pakistani Caucus, and he is also a member of the Indian Caucus. In his complaints against Khanna, Varshney refers to Pakistan as a “terrorist country.”

“We are protesting against his double standards on Gandhian philosophy and the [lack of] concern about global terrorism,” Varshney said. “He is taking sides with [and] giving his voice to a terrorist country. You cannot reject your culture. He was siding with anti-Gandhi people. He should apologize for the tweet and immediately come out from the caucus group of that terrorist country.”

After a question was posed on the topic of Khanna’s membership in both the Indian and Pakistani Caucus, he claimed peace in South Asia is justified because it is in the best interest of the U.S.

“I believe my job as a United States member of Congress is to look out for American interests, to look out for peace and not to advocate for any one foreign government,” Khanna said. “That’s why I’m criticizing Donald Trump, [because] he is advocating for a foreign government. The overwhelming majority of the Indian American community here believes in peace, believes in dialogue, believes that America should do what is in America’s interest. I will continue to do that. I certainly will never bow my convictions because of pressure from a special interest lobby.”