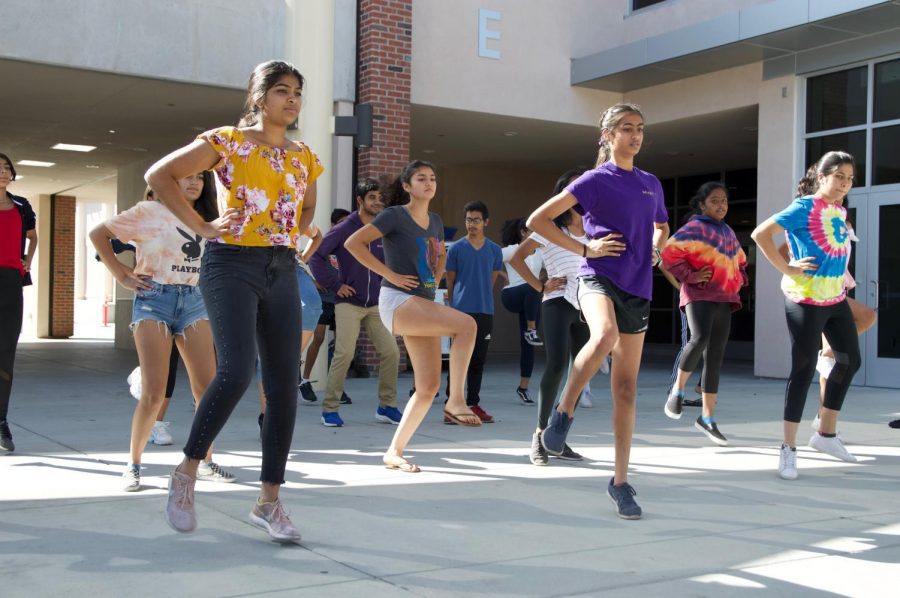 Prospective MV Bhangra members attend workshops in order to learn and perfect a short routine. Prior dance experience was not required in order to attend, since they were taught the basics.

V Bhangra — one of MVHS’s three Indian dance teams — expected an ordinary start to its 2019-20 season. They planned to hold two weeks of practice workshops, followed by a week of tryouts, some time to make a decision about team acceptances and eventually, the formation of a new team. What they didn’t expect, however, was the departure of their advisor: former MVHS Spanish teacher Richelle Griffin.

Senior and officer Janani Pandurangan remembers her older sister, Nandini Pandurangan, applying for club renewal and completing all the necessary procedures that would allow MV Bhangra to continue to be a dance team this upcoming school year. Consequently, she didn’t anticipate having to deal with club logistics and finding a new advisor.

However, according to sophomore Karunya Ramamoorthy, the officer team remained optimistic and diligent, and after asking several teachers if they would be willing to be an advisor, MVHS chemistry teacher Supriya Moore agreed to supervise. In addition to a change in advisor, MV Bhangra inadvertently combined and became a joint club with MV Raas — another one of the Indian dance teams — because Moore could only advise one club. However, Raas and Bhangra remain as two separate entities.

“Last year, Griffin was the advisor for MV Raas as well [as MV Bhangra],” Ramamoorthy said. “After she left, both [dance teams] didn’t have an advisor and since we do a lot of the same things, like we go to the same shows, and the timings are the same for practices, we just decided to become one club but obviously two different teams.”

According to Pandurangan, after finding an advisor, MV Bhangra had to immediately complete all logistical aspects for their club including the legislative club application process, going through an interview, passing their motion in legislative council and finally, getting cleared to conduct their September tryouts and workshops.

“It was kind of quite a hectic process because we didn’t know of it beforehand,” Pandurangan said. “Since we were kind of new at it, we had some hardships just figuring out what to do at certain moments, but at the end it was all figured out.”

After going through the hassle of finding an advisor and club renewal, Pandurangan says the officer team was excited to move away from management and into workshops and tryouts, which involved what they were truly passionate about: the art form of Bhangra.

MV Bhangra held workshops for two Fridays, where the officers taught members a short routine, and then conducted tryouts the following Friday, where prospective members would do the routine with a friend.

Junior Sathvika Gopalasetty was one of those aspiring members. She decided to try out for MV Bhangra because she found the energetic music and dance style appealing.

“The workshops were a lot of fun,” Gopalasetty said. “They taught us really well and it was really fun doing it with the music especially. We also got one-on-one time with the captains to perfect it, which I felt was a really nice and helpful aspect for me personally.”

Although she didn’t make the team, Gopalasetty says she really enjoyed the workshops and working on her routine for the tryout, and as a result, does not regret her decision to attend.

“Me and my friend tried out for MV Bhangra just because it looked really fun and I was kind of jealous of all my friends that were in dance teams,” Gopalasetty said. “For me, even if I made the team, I probably couldn’t have done it just because I have too many outside commitments, especially soccer, and so I was trying out just because it was fun for me.”

In contrast, junior Anand Kathardekar — who’s been on the team for the last two years, but still has to re-audition — explains that he continues to dance because of his passion for the art form. He says he finds it incredible that Bhangra can convey multiple messages through songs, beats and rhythms.

“My favorite aspect of Bhangra is the adrenaline rush that you feel on stage,” Kathardekar said. “It’s irreplaceable.”

After tryouts, the MV Bhangra officer team made a decision about the new team: there would be 21 team members and five officers. 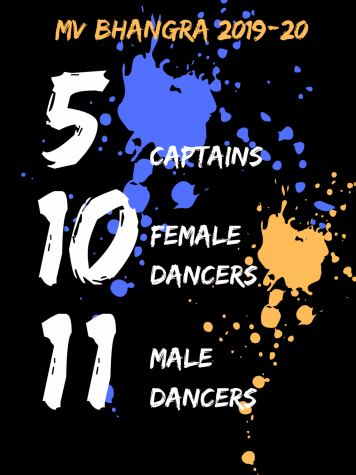 As a first year officer, Ramamoorthy says she was a little apprehensive about her officer duties, but feels that the officer team dynamic works well for her. For instance, the officer team makes decisions based on a unanimous vote, and the returning officers are always willing to guide new officers.

“This is my second year on the team, and my first year [as an officer], so obviously I am a little bit scared,” Ramamoorthy said. “But I’m really excited to have more leadership opportunities this year than I did last year.”

Pandurangan agrees with having a good officer as well as team dynamic, and says that aside from Bhangra being an amazing art form, the team members themselves are like family to her.