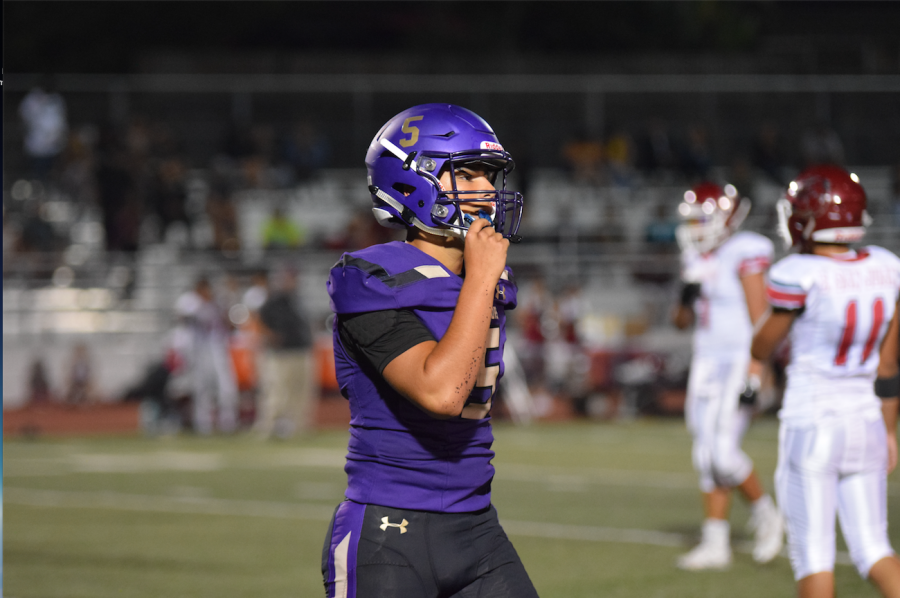 Junior and quarterback Simon Loeffler heads off the field. Photo by Tabitha Mendez

Although tradition holds that no American high school experience is complete without football, sophomore and varsity football player John Masegian believes that MVHS is an exception to that norm. In his eyes, football culture is dying. Masegain’s father is a MVHS alumni, and played football on the team. He explains that priorities of the population in the MVHS community have shifted and football simply isn’t important to the community anymore.

“Over time, as the area has changed, people are focused on other things,” Masegian said. “In [other places in the country], football is a very big thing, communities gather to go to football games — especially in high school. [But here], I really don’t think there’s a strong sense of community.”

MVHS’ football program has been on a clear downward trend for six years, according to the head coach of the varsity team Caesar Agront. Only 13 freshmen and sophomores were interested in joining the JV team this year. This ultimately led to the JV team being cut, as at least 20 players are necessary to field a team and avoid injuries.

Agront attributes the decline in football at MVHS to the lack of exposure students have to the sport in middle school. He believes that if students were introduced to it at a younger age, the football team would have greater numbers and more experience.

“[The numbers] are probably dropping because they don’t have an outlet,” Agront said. “Like Kennedy and Lawson don’t even have flag football things going on. That’s a huge problem. You know, it’s just like, there’s no demand for [the sport in the community], it seems.”

Freshman Greyson Mobley, who has been playing football eight years prior to joining the MVHS team, attributes MVHS’s declining interest in football to the community prioritizing academics and other extracurriculars over sports. He believes parents also discourage their kids from playing football due to the fear of concussions and other injuries.

“It’s really rare you get a concussion — I’ve been playing for eight years and still haven’t had a concussion,” Mobley said. “I feel like it’s mostly the parents that are afraid [of injuries] or just want their kids to focus on school and get good grades.”

Although Agront believes that cutting the JV team primarily harms the football program, he acknowledges that having freshmen and sophomores play on the varsity team does have some benefits as the less experienced players will be challenged and able to train more rigorously.
“[Only having a varsity team] is like a double edged sword,” Agront said. “It’s kind of like bittersweet because not having JV provides the numbers to the varsity, so there’s a lot of sophomores that can actually play on the varsity team. There’s even a few freshmen that can. But the bad thing is, is whenever you get rid of a JV program, you kill your varsity program. So not many teams can hold on. At [MVHS], I think it’d be devastating, honestly.”
In terms of the number of players, Masegian understands the need to combine JV with varsity due to the lack of numbers. Because the number of football players is so low, there are not enough players to fill two teams and be able to switch in players.

“You’ve got four or five freshmen that joined this year, last year there were eight or nine freshmen joining [the MVHS football program],” Masegian said. “Our team right now has like 25 [players], so if we had a JV, we would basically have everybody playing all the time.”

Another reason that Agront believes that football is dying out at MVHS is due to the administration’s lack of initiative in promoting football and keeping the program alive. He believes that the football team should play a more active role in rallies and other spirit events, in order to highlight the sport on campus.

“[There could be a huge difference] if admin got behind it, and really pushed it in the announcements,” Agront said. “This is the only school out of all the schools in the area that doesn’t include football players in the rallies. If when you do a kickoff rally, you should include the football team — they don’t do any of that. They’ll just like make a little announcement. It takes more than just showing up to a game or signing a piece of paper that allows for a program to get funding.”

Principal Ben Clausnitzer is open to the idea of implementing more spirit-related football events, such as a short rally during brunch ton game day on the rally court stage to draw attention to football.

“I don’t know if it would specifically be a rally in the way that MV thinks of rallies,” Clausnitzer said. “What I think MV thinks of rallies, they think of Welcome Back Rally, what I think [Agront] is kind of talking about is a sports rally. Which I think is a little bit different. Could [we] do something on Friday, before a game, during brunch, outdoor on the rally court stage? That could be intriguing.”

However, Clausnitzer is hesitant to promote football individually, without also highlighting other fall sports. He believes that in promotion, it is important to uplift the entire athletic department.
“If we’re going to think about football, I think we also want to think about other programs,” Clausnitzer said. “We want to think about volleyball, water polo, [and] cross country, in terms of fall sports. [As we think] about how can we promote athletics, I think you also need to talk about all athletics.”
Despite his hesitation in promoting football alone, Clausnitzer explains that administration have taken several implicit measures to boost the football program, including administration and athletic director, Nick Bonacorsi, emailing freshmen and sophomore students and their parents directly about football and promoting games with t-shirts and food. Additionally, Bonacorsi has three free periods in the day to dedicate to the athletic program while in the past, the athletic director only had one free period.

Well, I mean there are some things out there in football, that you might not be aware of. Mr. Bonacorsi is emailing the families very directly and I’m emailing all ninth graders students and parents, I’m emailing all tenth graders students and parents. Mr. White as an assistant principal says, “Hey, let’s let all ninth graders and their families in for free for first football game promotion. Mr. Bonacorsi said “Yeah, they can meet me at the athletic trainer’s office and I can take them in, I’ll give them a free t-shirt, we’ll give them free food.”

Agront mentions that though the school does provide the team with funding, the amount they receive to provide for the large team is the same amount that goes to smaller teams, which is not enough to help cover all the costs. The team resorts to fundraisers to make up for additional costs such as bus rides to away games.

Agront is also unsure of why there isn’t appreciation for football on campus, as the JV team at MVHS last year was undefeated. Instead of earning a greater turnout, participation in football has significantly dropped since last year.

“My JV team went undefeated last year,” Agront said. “And they say that winning is a great attraction, right? When you get a lot of people in the crowd, see when you get people that probably want to get more involved with the program. My JV went undefeated, and it was like almost like a decline in interest, which is dumb.”

Masegian agrees that wins and losses determine school interest in a sport to some extent. If the team has an incredible season, he believes the football program can be revived.

“I think that if we can get a title this year, we can keep this program going and people will want to be on the team,” Masegian said. “But if people don’t have the attitude that MVHS is good at football, then [they] won’t want to be on the football team. I’ll be here next year. If we don’t win a title, there will definitely be less hype, but I definitely think we can.”