Exploring the effects of recent deaths linked to e-cigarette usage 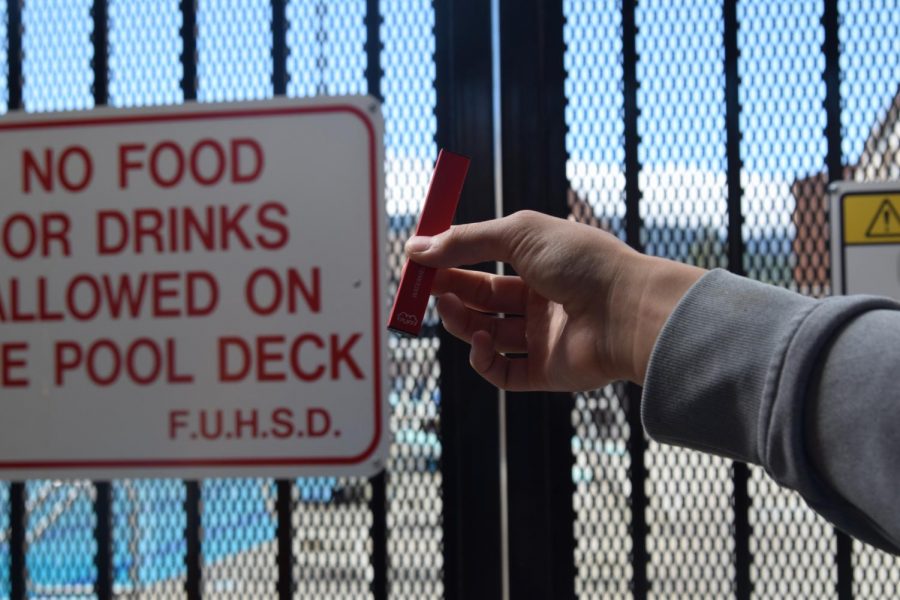 Many say the inconspicuous look of e-cigarette's contribute to their popularity among students. Photo by Sean Yagi

n recent months, there has been a rise in the number of e-cigarette related deaths occurring in the United States, notable cases striking as close as central California. Professionals speculate that the deaths are due to the flavoring chemicals used in e-cigarettes.

The recent deaths have only strengthened the district’s stance on a strict zero-tolerance smoking policy, and the new wave of underage smokers at schools within the district has greatly concerned FUHSD Superintendent Polly Bove.

“It’s a deceivingly dangerous practice,” Bove said. “It tastes perfectly benign and some of the packaging looks like candy. I don’t think students are aware of how dangerous it can be, even beyond the horrors of the deaths that have started to occur because of it.”

Procedures for dealing with students caught vaping on campus vary from school to school, but generally, the paraphernalia would be confiscated, and the student would be put through counseling to determine whether they are addicted or not. From there, the student could be suspended or assigned to additional counseling or therapy programs if deemed necessary. Additionally, those students are then educated on the risks and negative effects of e-cigarette usage.
“When we find kids using marijuana or e-cigarettes, [we] try to help them really get fully educated about why this is dangerous,” Bove said. “We have had … a parent-student information session that’s been held and very popular [at three of our schools]. Many of our parents went and were very surprised to find out that this was common and available.”
Some students believe that the measures taken by the district and individual school administrations fail to address the greater societal causes of vaping. Smokers like Gabe, who’s been given anonymity to protect his identity, believe that disciplinary actions should focus more on the smoker’s well-being.

“Giving these kids consequences, confiscating the device, of course is clearly a very good way, but at the same time I don’t think hammering that kid, like ‘you are wrong, you’re going to become a criminal, you are a danger to society’ [is beneficial],” Gabe said. “More of an ‘are you OK? Do you have things that make you happy at home?’ kind of reinforcement is necessary.”

Bove too sees flaws with the current disciplinary system, and has been working to implement more counseling and intervention programs that she believes will be more helpful to students compared to stricter disciplinary action.

“There’s a real effort to do a combination of discipline and guidance,” Bove said. “Because at the end of the day, if I send you home and you’re an e-cigarette smoker, you’re likely to smoke from home while you’re waiting to come back to school. But if I send you to a program that helps you start either realizing the dangers or helping you with any addiction, I think we have more success.”

As part of this push for more guidance programs, Bove emphasizes the importance of educating students on the dangers of e-cigarette usage at a young age, stating that getting to students before they can develop the habit is ideal. Following this logic, the district is considering having its feeder schools implement anti-smoking programs to educate younger students on the dangers of the practice.
“Even smoking one has the potential of creating the new idea of ‘Well, this didn’t seem so bad. It wasn’t a big deal. It tasted good,’” Bove said. “What is it that they say about Lay’s potato chips? You can’t just eat one?”
The implementation of new campaigns is not limited to just elementary and middle schools. FUHSD Student Board Representative Dan Sachs has been planning an anti-vaping campaign for the school since last year.

“I had the inclination that this [underage smoking] was happening.There were some incidents at the end of last year where the fire alarm went off because it detected particles that were likely from vaping,” Sachs said. “And so those kinds of things brought me to think that maybe this is something that we can work on. This is something that shouldn’t be in our schools.”

Sachs also believes that educating students on the topic is key to solving the problem, and stresses that the focus of the campaign will not be on punishment or disciplinary action.

“In the long term, [the goal is to] change the belief around vaping, making sure that students understand that it’s not a fun thing that they can do,” Sachs said. “It’s not in any way to pressure them or force them to do one thing or another. It’s important that students have their choices and are given all the relevant information.”

Despite the newly formed spotlight on underage e-cigarette usage due to the recent deaths, Gabe is skeptical about whether these new campaigns will have any impact. He believes that many campaigns miss the mark when it comes to connecting with smokers, as they choose to highlight the dangers of smoking, which he feels does not dissuade prominent smokers from continuing.
“I remember personally for me, it wasn’t like ‘Oh I am so ready to get high and become immobile and a vegetable,’” Gabe said. “It was like ‘Yo, my friend can blow huge clouds out of his mouth like a sensei dragon type thing,’ – that looks so cool!”
Bove acknowledges this perspective, and theorizes that optimism bias and denial both contribute to students’ lack of care for the negative health effects of vaping.

“I think sometimes thinking of your own death when you’re young is hard, right?” Bove said. “Because you’re healthy, you’re young, you have a wonderful life ahead of you.”

Bove explains that the disconnect felt by smokers like Gabe is why student input is necessary in implementing systems to reduce underage smoking. She aims to include more student input moving forward.

“We’ll try to think about it with them,” Bove said. “It’s a problem we’re happy to solve together. That’s the only way we’re going to solve it. It’s not going to just be adults solving it.”