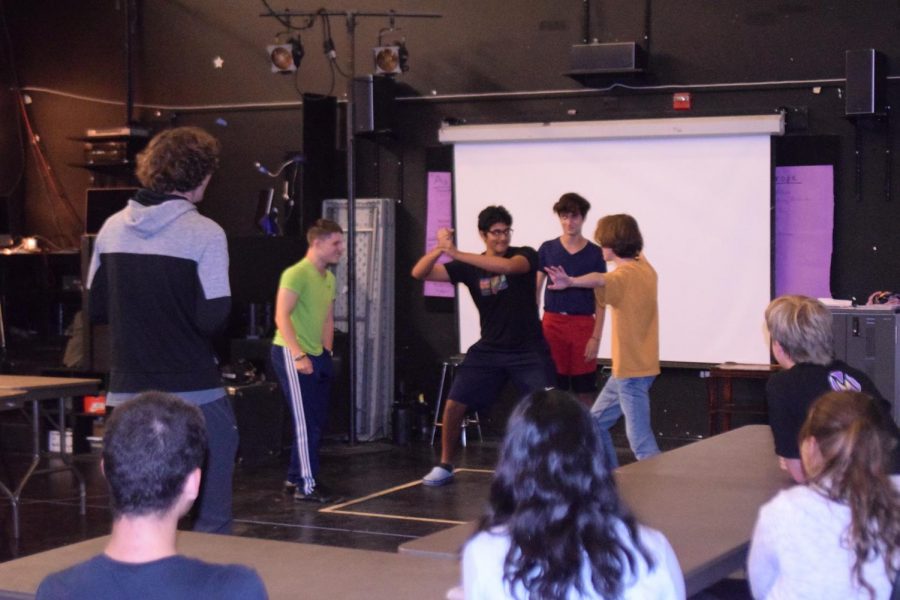 Members make up a dramatic fight scene on the spot in a certain film style for another improv activity called “Styles Replay.” Photo by Vivian Jiang 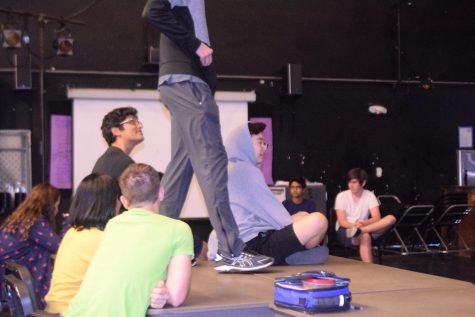 President Daniel Schie walks on a table while members participate in an improv game. This is just one of the ways Schie makes the club atmosphere less formal and more comfortable for the members. Photo by Vivian Jiang

Almost immediately after stepping into the black box for Improv Club’s first meeting of the year, one can hear a chorus of laughter ring through the air. President Daniel Schie stands on top of a table, narrowly avoiding members’ hands, and calls for their attention in order to start the next game. The club’s advisor, Mr. Holaday, nonchalantly sits in the corner on his computer. The environment sets a casual and friendly mood, with many volunteering to go up and participate in the next improv activity.

Schie then chose three members for the activity “The Dating Game,” where one person plays a historical figure, a second person plays a pop culture figure and the third plays a fictional character. A guesser is sent out of the room while the audience helps choose which characters the three participants should play. They end up picking Margaret Thatcher for the historical figure, both Phineas and Ferb for the fictional and Ben Shapiro for the pop culture figure. The conversation is light-hearted, full of humor and covers basic improv techniques, such as reacting in the moment as a certain character, which is exactly what treasurer Evan Connor is aiming for. 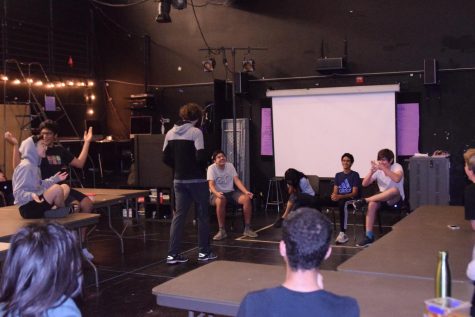 Members volunteer to take part in an improv activity named “The Dating Game.” Students react to a funny comment made by the guesser of the game. Photo by Vivian Jiang

“We do games of our choice with the goal of teaching some aspect of improv,” Connor said. “We just want to teach people to have a good time. We aren’t incredibly competitive about it.”

Although Schie acknowledges that improv sounds daunting at first, he believes the club’s laidback and relaxed environment makes it easy for new members to participate in small ways, such as warm up games at the beginning and end of the meetings.

“I want people to stop being so afraid of improv, so that’s why I try and make it like a super chill — just come hang out,” Schie said. “Because most people when they hear about the club, they’re scared. And then when they actually come, they’re like, ‘Oh, it’s a lot of fun.’”

Alex Sanchez, the only junior club officer, agrees with Schie about making the environment as comfortable as possible in order to foster creativity and stepping out of one’s comfort zone.

“[The atmosphere is] really kind of playful. You can say whatever you want,” Sanchez said. “It’s kind of an area to get away from school at school. It’s a space for people to express themselves and to be able to not only write comedic scenes better, [but] to be able to interact with people in comedic scenes.” 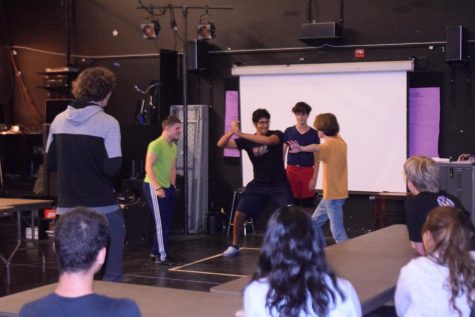 Members make up a dramatic fight scene on the spot in a certain film style for another improv activity called “Styles Replay.” Photo by Vivian Jiang

After “The Dating Game,” Schie moves the group into “Styles Replay.” In this game, Schie takes four volunteers to act out the same scene in multiple different styles, such as film noir or documentary. Dramatic displays which include members falling to the floor and sword fighting are replayed multiple times. Laughter from both the actors and the audience fills the room as they watch the same scene, completely improvised in a new style over and over again.

Before the lunch period ends, Schie quickly starts a group game called “Beastie Rap” which all audience members are invited to join. Members are split in half, facing head on in a race to make up a sentence that rhymes with the one before. However, the goal of the game isn’t to win; instead, it’s all about making people laugh. 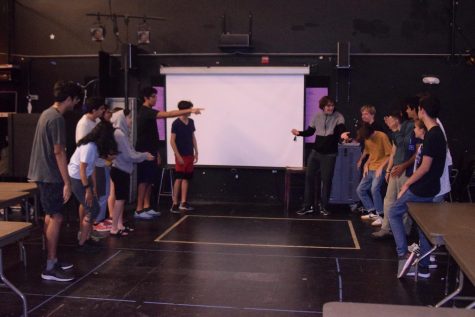 Members split up into two lines for the game “Beastie Rap” and face off in a battle of rhymes. Photo by Vivian Jiang

In addition to encouraging people to come out to meetings, Schie also hopes to hold performances throughout the year in order to connect more with the student body. From his freshmen to senior year, he has seen changes by the club becoming more organized and involved with school events.

“My first two years, the only performance we did was at the end of the year for the drama showcase, which was like a scholarship thing. And we were just that in between act, basically,” Schie said. “But last year, since we started doing more club stuff, like going to Club Info Day and Club Food Day, we started getting more offers to perform at places.”

However, one of the most important goals Schie has for the year is helping next year’s officer team prepare to step into his shoes. Since most of the club officers are seniors and will be leaving next year, Schie wants to make sure Sanchez is ready to take on his role.

“I still think that we need to train [him] up,” Schie said. “So that I can make sure that [Improv Club will] live on next year so that the tradition continues on.”

While Sanchez is a bit nervous about taking on the role of president next year, knowing that many people will depend on him, he notes that improv itself depends on the people to make up a scene and have fun. His main role next year will be to help guide people explore their creative side . He is optimistic about the future of the club, hoping to show more of the student body what improv is really like. 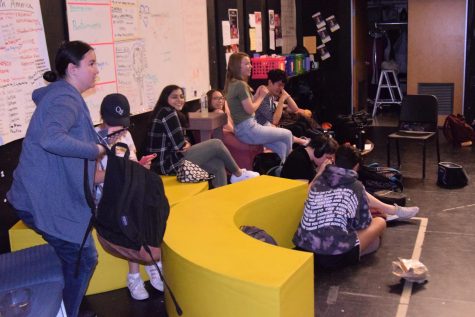 Some students come in not to participate but to relax and watch the games as casual observers. They laugh and react to jokes and comments made during the activities but don’t necessarily have to act or join in on the games. Photo by Vivian Jiang

“We hope to open up more lunchtime performances for certain students to show them how much fun it is,” Sanchez said. “It’s really important for coming out of your shell. I think that’s the ultimate goal this year is to emphasize that even more.”