Then 11-year-old and current junior and vice president of Chess Club Manus Manu was working on his homework at Leapstart After School when a nearby game of chess caught his attention.

Intrigued, Manu began to watch, marvelling at how quickly the players made their moves. Although he stuck to simply observing other players in the beginning, he slowly learned the rules and began playing chess as well. 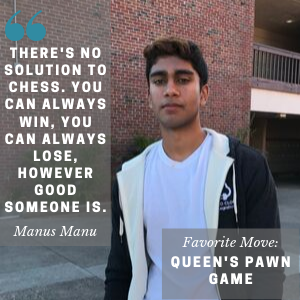 “Initially, I kept losing,” Manu said. “And I was fascinated by the people who could keep winning. But then I realized as you lose, you learn. By winning, you don’t learn anything. And I realized there’s no solution to chess. You can always win, you can always lose, [no matter how] good someone is. That’s what fascinated me.”

Similarly, sophomore and Secretary/Treasurer Ojas Karnavat was also first introduced to chess by seeing others play — in his case, Karnavat’s older brother took chess lessons at home while 6-year-old Karnavat observed. He gradually became interested, and joined the lessons.

“Initially, I had a lot of free time, and I played my family members … just playing them, beating them sometimes,” Karnavat said. “Over the years, I’ve realized, it’s really fun to play chess. The thrill of playing the game and the excitement has kept me going.” 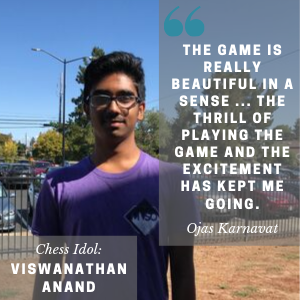 Karnavat was also inspired by Viswanathan Anand, who holds the title of Grandmaster, the highest title awarded to world-class chess players. Anand is also a five time world champion, the first Asian to do so.

“Growing up, he was one of the reasons me and many other chess players in India started playing chess,” Karnavat said. “From the state of nothing, he just got Indian chess [players interested].”

Junior and President Saadiq Shaikh had an elementary school friend whose father was a Grandmaster, motivating him and Shaikh to join their school chess club in third grade.

Prior to joining the club, Shaikh knew the rules of chess, but had never engaged in the activity competitively. Now, he practices daily on chess.com, a website where players around the world have the opportunity to play against each other.

“Playing in real life over the board is very different because your opponent is right in front of you, obviously,” Shaikh said. “But online, it’s just more convenient. And I think the online community of chess players has grown a lot more simply because of how convenient it is.”

However, Shaikh says he doesn’t have as much time to play chess as he used to. Because of this, his reasons for playing chess have shifted over time.

“It’s become a lot more of something I do with my friends,” Shaikh said. “A relaxing activity that I do to take my mind off of school. So it’s transformed from a competitive activity to something that’s more fun, something I enjoy doing.”

Karnavat, too, enjoys the social component of chess, which contributed to his decision to first join Chess Club.

“During lunch [when] you’re not doing anything anyways, just play some chess, have fun and just enjoy [it] with [your] friends,” Karnavat said.

Manu strongly values the team element as well, which comes into play when the club goes to tournaments. Although chess is an individual game, the scores of four players are grouped together for a team score, which Manu prefers over competing alone.

“There’s someone [to] encourage you,” Manu said. “When you’re playing alone, you get very sad after a hard loss. You sit for five hours at a board, you lose — it’s very tough. But [in a team], there’s always someone to bring you back up and say, ‘Oh, go win next game.’”