Refuting my previous belief that protesting is ineffective 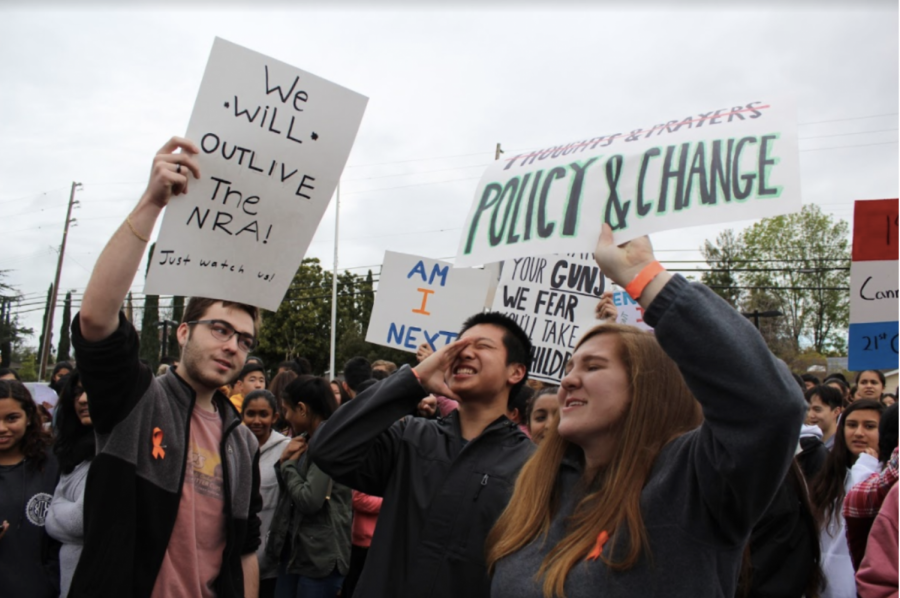 During March of 2018, MVHS students hosted a school walk-out in order to protest against gun violence in America.

still remember the day I apprehensively walked out of freshman biology. I hadn’t ever done anything like this before — left a classroom without a teacher’s approval. I reminded myself why I was doing this: for the innocent students who had lost their lives in the Marjory Stoneman Douglas shooting. I reminded myself that I, along with the majority of the students at MVHS, was wearing orange to symbolize solidarity and condemnation of this nation’s inability to put a stop to mass shootings. I reminded myself, as I walked out into the cold morning air, that this school walk-out was meaningful and would prompt change.

And then nothing happened.

As much as I hate to admit it, the preceding statement isn’t an exaggeration. Literally, nothing happened. Lawmakers haven’t been able to pass effective gun laws. Mass shootings continue to persist, despite the two long years that have passed since the school walk-out.

The lack of response was disappointing and disheartening, but most of all, it convinced me that protesting was ineffective. It felt like a giant waste of time that didn’t benefit anyone. It seems like its sole purpose was to make the protesters slip into a disguise of empowerment. Clearly, there was no point, right?

Yet a few days ago, I caught myself being drawn to articles about the global climate strike. I sifted through pictures of people all over the world — Americans, Pakistanis, Chileans, just to name a few — holding up signs and marching through the streets. Instead of casting cursory glances at these articles and moving on to what I felt were more important things, I began to look a little deeper. I suddenly felt a pang of regret. I was reading about this strike and looking at these powerful images, yet I hadn’t been able to experience it.

I didn’t understand this sudden pang of regret. I tried to console myself with my usual drilled reminders.

Until I realized: maybe that’s okay. I don’t mean that it’s okay to simply march through the streets and let issues persist, but I can now understand its allure and why it can be beneficial.

To me, protesting feels more about the people than the cause. It serves as an outlet for people — especially young people — to prove to themselves and the world that they have a voice and that their voice needs to be heard. Frankly, that voice may not be able to do much. After all, underage voters hold inconsequential political power. But as cliché as this sounds, young people are the future. Eventually, they will hold consequential political power.

An issue like climate change requires tremendous collective effort and collaboration, which is one of the reasons why thinking about it makes me despair a little. But experiencing the climate strike just through my computer screen has made me feel a little less hopeless and a little more motivated and inspired. I can’t help but think that these feelings of motivation and inspiration would be exponentially higher if I had experienced the strike in person instead.

At the end of the day, that’s what matters. Feeling inspired and motivated. I’ve spent a long time being a pessimist — arguably a realist — and condemning protesting. However, protesting — for generations young and old — is a way through which we can feel like we hold some semblance of power. It tells us that we don’t need to sit in the White House to make a difference. It shows us that despite the practical argument of its ineffectiveness, protesting incites a psychological, I-can-make-a-difference belief.

Looking at the state of the world today, that’s exactly what we need. We need young people to have a I-can-make-a-difference belief. So that when young people are no longer young, this belief will have morphed into a I-have-made-a-difference reality.

So maybe the next time a local protest is organized, you won’t see me on my screen, but instead, on the streets.