Football: MVHS wins against San Jose HS for the first home win of the season 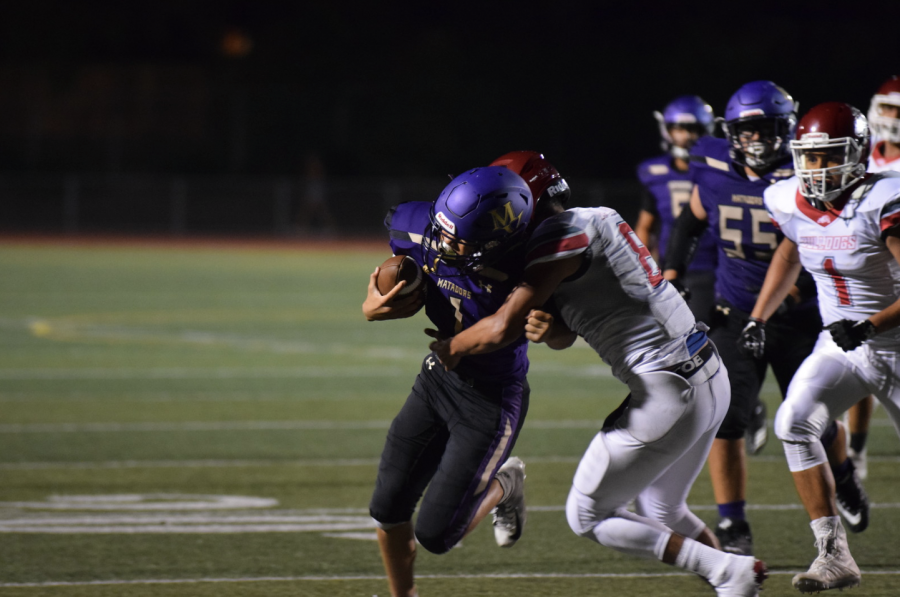 Frehsman Greyson Mobley makes a run against SJHS, trying to keep the Matadors in the lead. Photo by Collin Qian

A 28 point lead was exactly what MVHS needed in their second home game of the season. After a tough loss against Mills HS the week before, the Matadors looked for redemption against San Jose HS — they went on to win 35-7 as they scored 21 of those points in the second half.

MVHS drove the ball down on the opening drive of the game which senior wide receiver Tarun Sarang capped off with a touchdown. Soon after, SJHS answered right back with a rushing touchdown from the one-yard line to tie the game 7-7.

nutes left until half time. Within these eight minutes of play, there were seconds of instinctual football from Sarang that helped keep the drive alive.

“As soon as [Loeffler] pitched it behind me, I just tried to get on the ball and I saw that it was going to bounce into my hands,” Sarang said. “I saw that the defense was overflowing hard to the left and I decided to reverse field, and I found a lane around them. Then I cut back on [SJHS] going back the other way again and things just opened up.”

After three years of playing varsity football against a multitude of teams, Sarang has gained experience over the years. While Sarang made the play, his teammates assisted and cheered as he successfully ran nearly 40 yards.

“There was great blocking, our line and our receivers really helped me out on that play,” Sarang said. “They saved my a** there and I’m really grateful to all of them. I think instinct took over for everyone in that play. When plays break down in football, it’s about who can get through it without overthinking it and making mistakes.”

As the second half commenced, touchdowns from Loeffler and senior running back Henry Lassa meant MVHS had a commanding lead throughout the second half. With a final score of 35-7, Sarang explains that the victory meant a lot to the team after losing by a huge margin against Mills HS.

“Last week was so demoralizing after what happened after the second half,” Sarang said. “So this week feels way better, it felt like we were in control for once — it felt like a huge step up for us as a team. I think that we’re going to go forward, we’re going to have better execution and a tighter bond. Things are going to get better from here.”

Sarang entirely credits the team’s offensive coordinator, Cody Owens, for the team’s strategies and plays. Without Owens’ intuition, Sarang doesn’t believe they would have defeated SJHS so effectively.

“I think that coach [Owens] does a great job of preparing the offense for the different defenses that we’re going to face,” Sarang said. “I really credit our whole offensive success to Coach Cody. He’s a genius doesn’t get enough credit for it. He calls like the right plays every time and it’s just magical.”

Senior and defensive end Michael Sorooshian is proud of the team’s performance in the game against SJHS, but believes the team still has offensive techniques to master. He doesn’t want to allow this one victory to distract the team from their long-term goals.

“I think we still have a lot to work on,” Sorooshian said. “Definitely offensively [we improved a lot compared to last week] but we had made some mistakes on blocking. Defensively, we rallied, but we still need to get that action as our coach says.”

This was junior and outside linebacker Owen Lassa’s first varsity game and he’s taking every possible opportunity to improve and grow with the team. This victory has made him optimistic about the rest of the season.