Field Hockey: MVHS wins back to back games for the first time since 2017 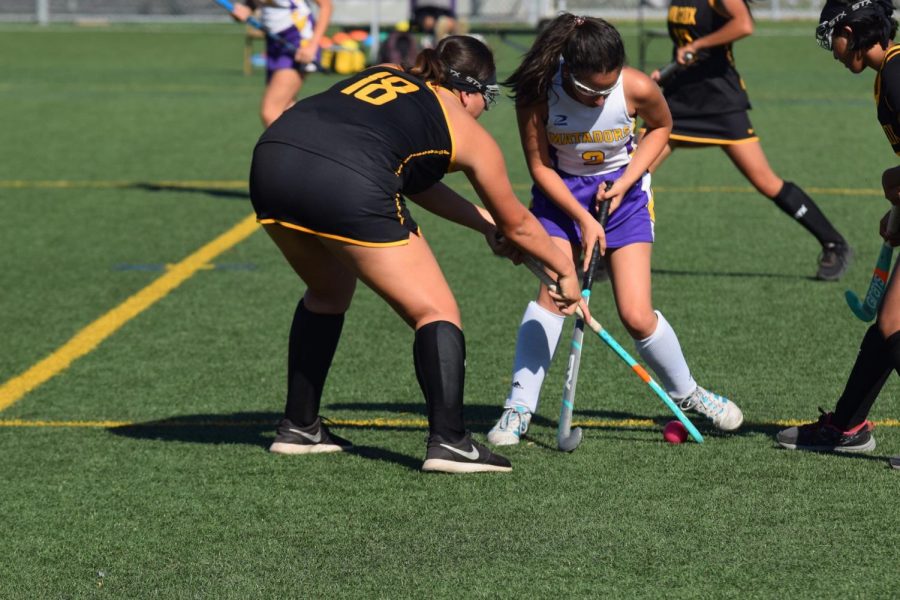 Senior Victoria Valdez takes the ball away from Wilcox HS in a 12-0 win. Photo by Sreya Kumar

oming from a commanding 3-0 win against Valley Christian HS, the MVHS field hockey team was looking for another win making it the first back to back win in field hockey since 2017. MVHS players followed through on their goal, beating Wilcox High School (WHS) in a 12-0 victory.

The Matadors started the game on offense, keeping the Wilcox HS defenders on their toes and not allowing counter attack opportunities throughout the game. With numerous shots in the first 15 minutes, MVHS scored goals on three separate occasions.   Senior Madisen Vognakhone said the offense was active and alert the entire game.

“We were doing an offensive push,” Vognakhone said. “We weren’t standing around and transitioning … [slowly from place to place]. I thought that being hungry for the ball was really good and the forwards and [midfielders] worked really well together compared to other games.”

The Matadors maintained their energy to keep advancing upfield and continued their scoring streak towards the end of the first half and the first half ended with seven goals. In the second half, MVHS did not relinquish the scoring onslaught, scoring five additional goals and effectively blocking WHS from advancing the ball.

“We were implementing things that we talked about during halftime like spreading out, making sure we were not clumping and [making] strong hits,” Vongakhone said.

With the team’s second dominant victory of the season, Junior and center forward Prisha Khatwani believes that continuously communicating on the field and being alert for the ball led them to victory.

“I feel like the scoreboard reflected that we played better than we actually did,” Khatwani said. “Maybe next time, we can be less cocky because as the second half started, we didn’t play as well. We scored seven [goals] in the first and scored five [goals in the second half].”

Vongnakhone sees the wins as a boost of confidence for the team and hopes they don’t falter or lose steam in the upcoming games and hopes the success continues in the future.

“That just shows us how we’re just improving and working on the things we do in practice,” Vongnakhone said. “We’re not taking steps back, we’re moving forward and I think that’s a great thing.”