The disappearance of the Monta Vista Cheer Team 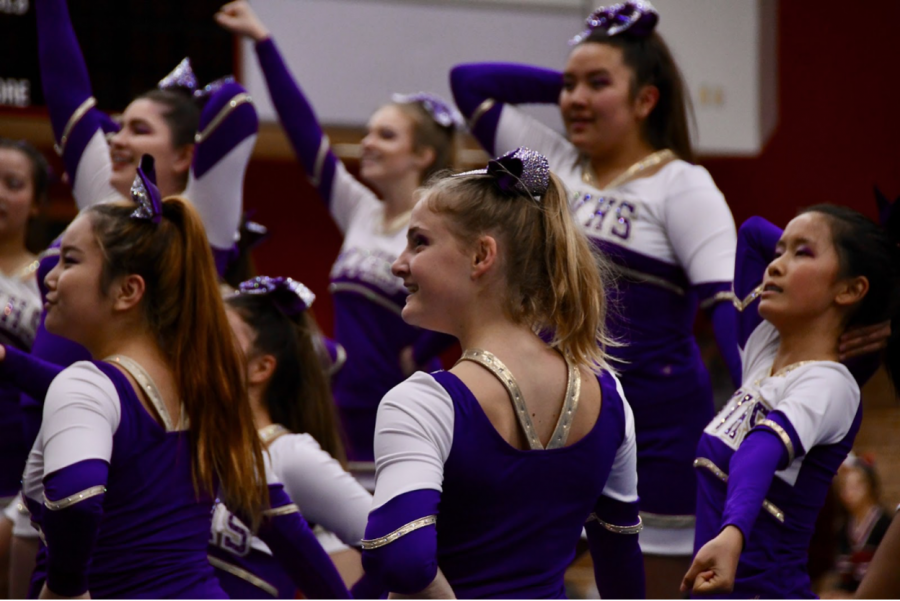 MVHS students yell the last lines of the Alma Mater at each rally while members of the cheer team perform their routines. The spirit at rallies and sporting events is fostered through song and cheer — until this year. The beginning of the end for MVHS cheer was set in motion once the team’s coach, Brittany Carey, quit for personal reasons this January. Left in disarray, the cheer team was left to its own devices, yet continued to be present at the remaining games of last school year.

Last year’s cheer captain and junior Rachel Huang explained that the team had a greater number of new members last year, which made the team less organized and structured compared to previous years. As a leader, she had to take more responsibility due to their coach leaving unexpectedly.

“[We went] to [the new members’] houses, making sure they knew all of the cheers, testing them, creating routine[s], sometimes working with the other captains on stunt technique, things like that,” Huang said. “But I would definitely say it [was] rewarding, especially with all the new members who kind of looked up to you in a way. You can teach them a lot about not just cheer, but about school.”

After the cheer coach left, the administration remained in contact with the team, but ultimately explained that they could not stunt without a certified supervisor. This led to the team holding smaller practices in the studio, as a way to continue cheer team while not having a coach.

Sophomore and former cheerleader Charvi Talla is disappointed that there is no longer a cheer team this year. Even though Talla joined later in the year and had to catch up with the rest of her peers, she still enjoyed her time on the team.

“[Cheer] did make me a lot more busy, but it was really fun having a team to bond with and having a lot more friends,” Talla said. “And it allowed me to interact with more people in different grades. And overall, the experience was great, even though I was [in cheer] for such a short amount of time.”

In an attempt to replace the cheer team, the MVHS Yell Team was formed by College and Career Counselor McKenna Parfet. Many have heard of the new MVHS Yell Team through announcements, emails and Instagram posts. It was created to serve as a replacement for the cheer team. The group aims to continue to cultivate school spirit at athletic events and attend school events, similar to other groups like Leadership and ASB. However there is one key difference: Yell Team members aren’t allowed to stunt.

Due to a rewarding sense of community the cheer team gave her, Talla attended the interest meeting to gauge her interest in the Yell Team, in hopes of being able to continue showing her spirit at games. However, Talla felt that the team was lacking similarity to cheer.

“Since there was no cheer team this year, I feel like they need[ed] someone to please the crowd and have the crowd hyped up for the game,” Talla said. “So they decided to make the Yell Team, which, it honestly is not a bad idea. But I wish it had more cheer aspects of it.”

Around campus, the absence of cheer is noted, especially by many sports teams that valued the moral support, according to junior varsity quarterback and sophomore Prathmesh Modi.

“[I will miss] always having support, and with them being gone, it kind of sucks,” Modi said. “[I]t would be better if they were out there.”

Ultimately, Huang and Talla couldn’t join the team due to other engagements. Talla believes that the lack of a cheer team may have a negative effect on the school.

“Not having a cheer team feels a little less dull, because it is a sport, and it was a sport that we had to work really hard for,” Talla said. “And people wouldn’t appreciate that. But then we know that it’s a sport. And not having a cheer team would be like cutting off the football team — or something like that. They all come together hand in hand.”