Next in the Spotlight 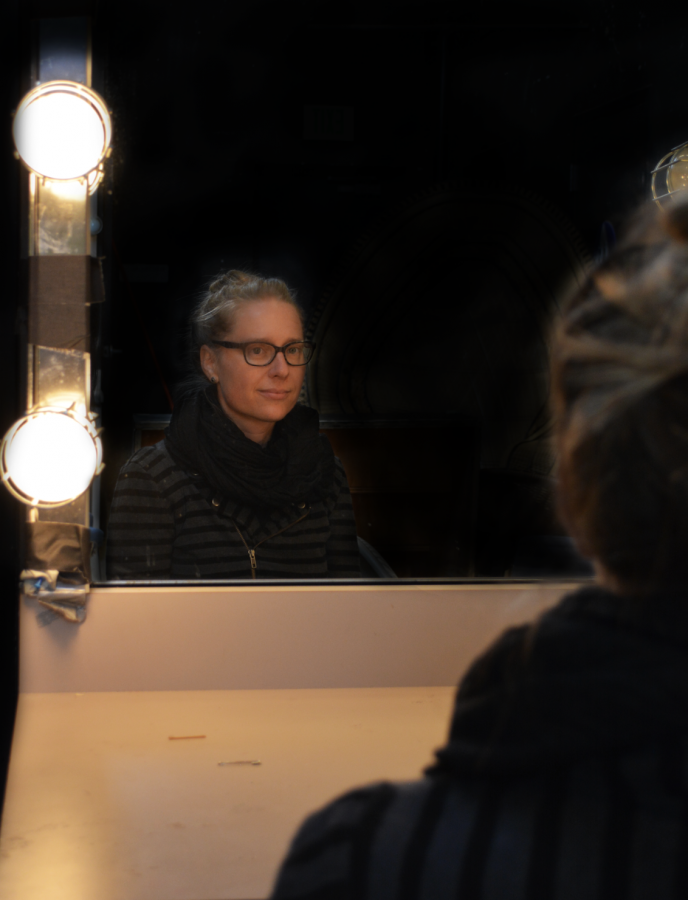 s sophomore Naomi Yin filed into the black box theater along with her fellow drama students during tutorial on May 10, her jaw dropped in surprise when she was met not only by their long-term substitute teacher Jeffrey Adams, but also by Principal Ben Clausnitzer and her World Literature teacher Hannah Gould.

“That’s my English teacher,” she exclaimed to a friend in surprise as they stood facing Clausnitzer and Gould. Clausnitzer went on to formally introduce Gould as the new drama teacher for the 2019-20 school year.

Gould will be taking over the four periods of drama next year, while also teaching one period of Honors American Literature, a course she’s been teaching for three years. According to junior Rachel Millar, the drama department has seen numerous changes over the past two years, with three different drama teachers coming and going.

“This department hasn’t had stability for a long time,” Millar said. “So it’s frustrating and upsetting to have another change of course, regardless of the person.”

When former drama teacher Sara Capule went on maternity leave in January 2018, Adams stepped in as the long-term sub, a position he has now held for nearly a year and a half, because Capule decided to extend her maternity leave for the 2018-19 school year, to spend more time with her son. While Capule will return to teaching in the fall, she will be teaching English at Lynbrook HS.

“My priorities were changed — they had to because all of a sudden there was a child in the mix,” Capule said. “And theater at a school is really demanding. I decided that it was best for me to take a step away from theater in a school for now.”

When Capule decided not to return, it left a drama opening at MVHS. Unlike Yin, Millar’s reaction to the news wasn’t one of surprise, as she says she and some of her fellow drama students had suspected that Gould would be their new teacher. Instead, Millar was upset to see Adams, a teacher she had developed a relationship with, leave.

“I think we definitely have an attachment to Mr. Adams, especially because he is such a seasoned actor,” Millar said. “He has a lot of experience in commercial and live theater and musicals and so that’s really rare, to have someone so in the industry be willing to and enjoy teaching drama at a public school.”

Despite her unhappiness with having to say goodbye to Adams, Millar understands that this change is something that can’t be helped.

While Gould is extremely excited to take on drama, she understands the sentiments of the students. She and Capule explain that the feeling of powerlessness is common among teachers too while the district may ask for teacher input, it rarely factors into their final decision in the end. Capule points to the bell schedule change as an example a decision that was ultimately the district’s to make.

“I know how hard it is to lose a teacher that you feel really close with and I know how it can feel when you feel like you don’t have power to make that change,” Gould said. “I know that’s a really, really important part of this transition process.”

While Adams declined to be interviewed for this story, he wrote in an email: “I leave the [MVHS] community with a heavy but full heart; I trust the Drama students are in good hands and I wish Ms. Gould all the best.”

English department lead David Clarke explains that one silver lining in the change is that no current MVHS English teachers would be displaced or let go, as the school was overstaffed.

According to the collective bargaining agreement with the Fremont Education Association Union, this usually means that the person of lowest seniority in the overstaffed department is moved to a different school with openings or is no longer employed by the district, a situation which MVHS hasn’t had to deal with in many years.

“Now, whether someone was going to lose their job in the district, it didn’t look like that was going to happen,” Clarke said. “It looked like someone would have to move.”

Gould chose to move into the available position in the drama department due to her former theater background, since the job holds the same credentials as English

“Everyone who was involved was really thinking about student wellbeing. We wanted to make sure that [the news] was delivered in a mindful way,” Gould said. “There’s so much dedication and passion in that department. I really admired how seriously they took it.”

Because the English department at MVHS was facing a situation in which it seemed to be overstaffed, Capule, who had wanted to move into the English department, was offered a position at Lynbrook HS. While she is open to teaching drama in the future, as a new mom, the commitment that drama demanded putting on two annual productions and being in charge of lights, sound, costumes, directing, funding and marketing, on top of the work that comes with her role as a teacher wouldn’t give her the time she needed for herself and her son.

When she first became a teacher, Gould was offered the choice between a position at Independence HS as a full-time drama teacher and at MVHS as a full-time English teacher. She wanted to teach at MVHS, so she chose to come in as an English teacher, but she has been speaking to Capule about getting involved in the drama department since the beginning of her time at the school. Because she was still learning how to teach in her first two years here, she was hesitant to involve herself in the department, but when the position became available and the English department was overstaffed, she decided to apply.

“I was sort of waiting for the right time even though it seems kind of sudden at this point,” Gould said. “It just seemed to work out in a lot of ways to just sort of dive into the opportunity now.”

Gould had been involved in drama since elementary school, attending Lincoln HS, a performing arts magnet school, and continuing to participate in student shows and playwriting in college at Barnard. She continues to be a part of the theater community by going to playwright festivals and seeing productions often.

“[I go to] just everywhere I can soak up theater to see what’s going on in the community,” Gould said.

In preparation for her new role next school year, Gould has been working with Capule and looking into summer courses and workshops that will help her improve her directing, experience in tech theater and her knowledge of voice, rhythm and body. One of these will have her traveling to New York to learn from Broadway professionals. While she has some level of experience in most aspects of theater, Gould has recently started working on the video production board for a show called “Silent Sky” in order to learn about tech theater, an opportunity she credits Capule for helping her get.  Capule has taken on a large role in helping Gould with the transition. Her biggest advice for Gould is to keep a student-focused department.

“Always look at it that way, that it is a collaboration with the kids and they own the work that they’re doing as much as you do, and figuring that out together,” Capule said.

Gould has already taken steps to take the advice into account, asking her new students for musical suggestions and having them share what their goals are for next year, both for drama and outside. This desire to be involved in students’ lives outside of drama is something the students have grown attached to with Adams.

“He was so incredibly supportive of each person individually, and that’s something that I’ve never seen from a teacher,” Millar said. “He’s always there to support every student whether it’s mental health or issues at home or just stage fright.”

Gould wants to help create that environment in her new position, as she credits her own theater experience for helping her develop her own morals, strengths and skills that have helped her in her adult life. While she remains excited about every aspect of her new position, including the ability to collaborate with students and further explore her passion for theater, she also looks forward to encouraging and fostering her students to develop their own beliefs and skills through drama. For Capule, witnessing this development is what she will miss the most as she leaves the drama department.

“The growth that I would see in students in that realm … it just made me feel like the work that I was doing was really making an impact,” Capule said. “So I think that is the gift that I was given by doing this job.”

Despite the challenges that she recognizes will come with her new role, including an increased time commitment and the struggles of the transition, Gould is looking forward to the upcoming school year.

“I love being involved in theater in any way possible,” Gould said. “It fills me with a joy and an excitement that very few, maybe no other things in the world do.”