How I use playlists to commemorate my relationships 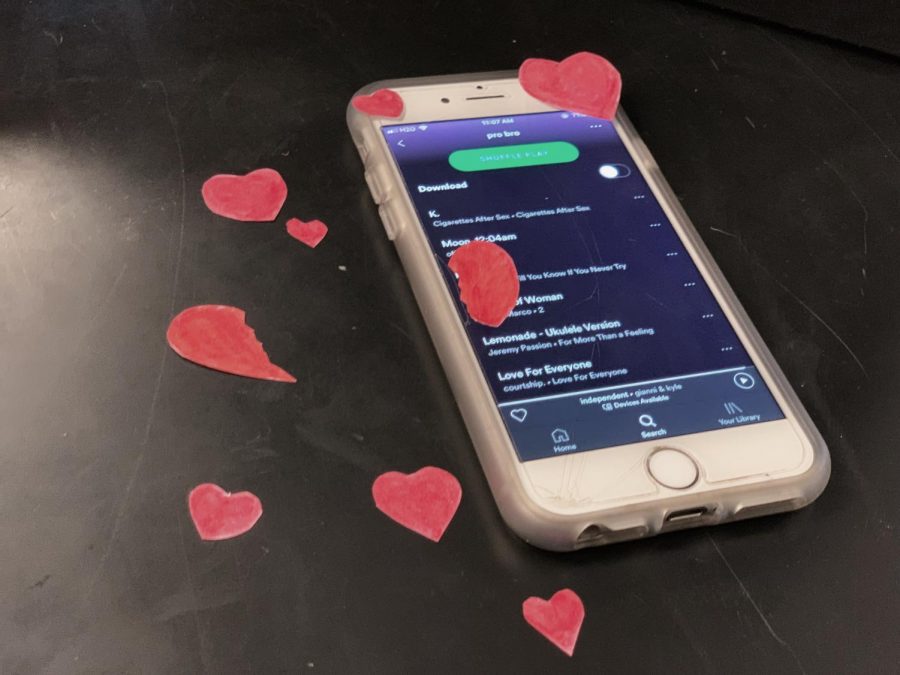 To this day, I can see his face clearly; his skin glistens in the sun and his cheeks look so soft. His long curls frame his face perfectly, and I can’t help but be reminded of a puppy. It’s funny, how after months of talking to someone, feelings can change in an instant. Before I saw him as only a friend, someone special to me with whom I could share all of my secrets, even the things I didn’t share with others. For those few months in seventh grade, he was just a close friend I could go to, someone who could calm me down when I was stressed. But now, he was more.

A few weeks go by, and he sends me a playlist titled “the after hours.” It’s filled with old songs he recommended to me. Most songs I admittedly pretend to enjoy but nonetheless the thought was sweet. I had never had someone dedicate a collection of songs to me, and knowing how much it meant to him, the playlist was significant to me as well. Especially because we were in middle school and someone making me a playlist was the most action I had ever gotten at that point, I took this as a sign that my feelings were reciprocated. No one makes their friends playlists filled with sad love songs and ballads that have a strong connection to them for no reason, right?

I continued this trend for myself. Every time I started a new relationship, I made a playlist. I liked to associate songs with a memory or person — it created a new and different meaning from the original intention of the artist. This made the songs my own, something created for me and I loved sharing that with people I cared for.

The summer between eighth to ninth grade, I began to get close to a girl named Lulu, and we started dating. It felt natural because she was previously my best friend, and the only difference now was the fact that we were putting a label to how we felt. Even as friends, we would send each other songs to listen to. Her music taste overlapped with mine — we listened to a variety of similar genres, but honestly, she had better music taste than I did. It only made sense to create a playlist of the songs we both felt a connection with and that we associated with each other.

The playlist starts with “K.” by Cigarettes After Sex — the first song she added to the collaborative playlist. The lyrics explained our feelings pretty well, as did almost all the songs. Through music, we both opened up on a different level.

Music is an universal language, and as a consumer, it can be interpreted in any way you want. It translates my feelings clearly to help me make sense of things. Even after we broke up and went back to being friends, it was easy to listen to the playlist because I associate those songs with happy memories of Lulu — who I still love.

That’s the thing with making playlists for your significant others. If you include music you love or want to get them interested in, and the relationship ends badly, it’s hard to listen to after. The meaning of the song or artist changes from how it made you initially feel, and you can’t help but reminisce on the good times you spent together or the warm feelings you got when they looked you in the eyes.

Well, that fear didn’t stop me from continuing the trend. It was early this school year when I got involved with a girl I had only known for a few days that I made another one. This time, though, it was for a crush and my feelings were no more than mediocre, but I played it out to be dramatic. In the playlist I titled “kith,” I conveyed the expectations I had for our relationship through the music. It’s mostly sad Korean love songs made by my favorite artists that had no prior connection with that girl. It felt almost forced.

I hadn’t known her for long and I didn’t know what her music taste was like, so this playlist was solely for me to romanticize things I wanted but couldn’t get. Like when I would ask about her day and she wouldn’t return the gesture, almost uninterested in me. When I listen to some of the songs now, it brings a heavy feeling to my heart, taking me to old memories. I enjoyed a lot of the songs before I met her, but now that I had made that playlist, it’s tainted with bad memories of her.

Of course, most recently, I started a new one for another crush. It contains only one song. I don’t plan on continuing it though, as I do not plan on leading on into a relationship with them or anyone.

To be honest, I think I do small things like making a playlist as it gives me the ability to show I genuinely care without having to say it. It’s that I put the time in making something, even as small as a playlist. I’ve always loved physical affection or when someone tells me that something had reminded them of me. The little things people do for me mean so much more than when someone says they love me. This might just be me and my commitment issues talking, but I’d rather continue a relationship where we show each other we care without the need to remind each other.

I don’t believe these will be the only playlists I’ll ever make or share with my significant others. I can see myself doing this as I grow old because music is essential to me. It’s a way I can detach from the world, process my feelings or in this case, show others I care about them.

It’s not flirty or cliché — I see it as a form of showing my affection. Instead of saying “I love you,” why not make a playlist full of the top 23 songs you share with someone?