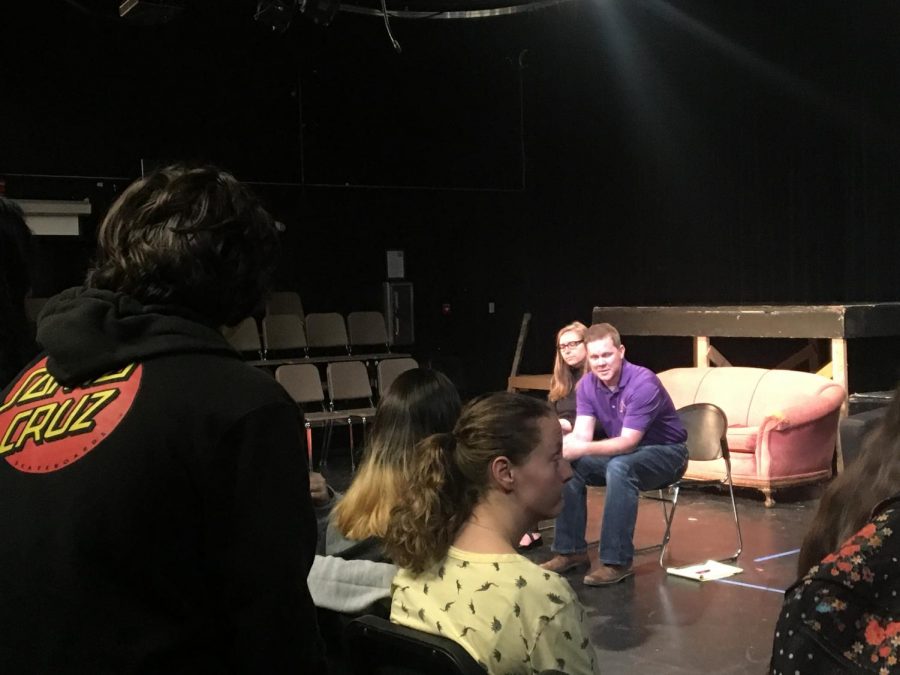 s sophomore Naomi Yin filed into the black box theater along with her fellow drama students during tutorial on Friday, her jaw dropped in surprise when she was met by not only their long-term substitute teacher Jeffrey Adams, but also by Principal Ben Clausnitzer and her World Literature teacher Hannah Gould.

“That’s my English teacher,” she exclaimed to her friend in surprise as they stood facing Clausnitzer and Gould.

Clausnitzer went on to formally introduce Gould as the new drama teacher for the 2019-20 school year.

Gould will be taking over the four periods of drama next year, while also teaching one period of Honors American Literature, a course she’s been teaching for three years. According to junior Rachel Millar, the drama department has seen numerous changes over the past two years, with three different drama teachers coming and going.

“This department hasn’t had stability for a long time,” Millar said. “So it’s frustrating and upsetting to have another change of course, regardless of the person.”

When former drama teacher Sara Capule went on maternity leave in January 2018, Adams stepped in as the long-term sub, a position he has now held for nearly a year and a half. Capule decided not to return to drama, opening up the position. English department lead David Clarke explains that one silver lining in the change is that no current MVHS English teachers would be displaced or let go, as the school was overstaffed.

According to the collective bargaining agreement with the Fremont Education Association Union, this usually means that the person of lowest seniority in the overstaffed department is moved to a different school with openings or is no longer employed by the district ⏤ a situation which MVHS hasn’t had to deal with in many years.

“Now, whether someone was going to lose their job in the district, it didn’t look like that was going to happen,” Clarke said. “It looked like someone would have to move.”

In this case, Gould chose to move into the available position in the drama department ⏤ which holds the same credential as English ⏤ due to her own former theater background.

“I know Ms. Gould. She’s always happy, which I think will be a good thing,” Yin said. “We’re doing a lot of analysis [in her class], so I’m scared about [potentially having to do that in drama as well].”

For Millar, however, her reaction wasn’t one of surprise, as she says she and some of her fellow drama students had suspected that Gould would be their new teacher. Instead, Millar was upset to see Adams, a teacher she had developed a strong relationship with, leave.

“I think we definitely have an attachment to Mr. Adams, especially because he is such a seasoned actor,” Millar said. “He has a lot of experience in commercial and live theater and musicals and so that’s really rare, to have someone so in the industry be willing to and enjoy teaching drama at a public school.”

Despite her unhappiness with having to say goodbye to Adams, Millar understands that this change is something that can’t be helped.