The crossroads of food and religion in the month of April

How religion influences diet during a holiday season 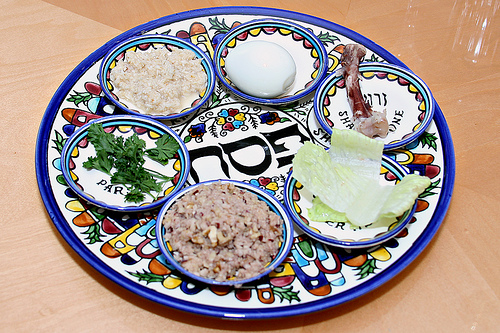 Readily-available Easter renditions of adorable baby animals and the declining diets of students overwhelmed by approaching exams are not the only contributors to fluctuation in food consumption during April—some of the most widely observed holidays from a variety of religions also take place during the month. Holidays such as Lent and Passover elicit a change in diet for members of their respective religions.

In the Christian faith, believers can spend six to seven weeks before Easter fasting to mimic Jesus Christ’s 40-day fast in the wilderness. The process is intended to serve as a period of preparation for baptism and of penance for sinning, a way for believers to understand what Jesus endured in order to become a public minister. Although specific rules for fasting vary between Eastern and Western churches, a common point is that the deprivation reminds believers to pray and focus on spiritual matters over physical desires.

Originally a Christian holiday celebrating the resurrection of Jesus Christ and the conclusion of the fasting season, Easter has become a holiday that people around the world celebrate regardless of denomination. From egg hunts to egg rolling to egg decorating, the universal symbol of fertility and birth has appeared in pagan traditions that existed long before the invention of Christianity. In addition, some historians believe that the Easter Bunny tradition derives from the fact that rabbits are “enthusiastic procreators” who herald the arrival of springtime with new litters. Today, commercial businesses have capitalized on the popularity of the holiday to market greeting cards, chocolate candies and other gifts.

Passover, a weeklong Jewish festival, honors the Jewish exodus from Egypt as described in the Old Testament. During the first two nights of Passover, Jews gather with their friends and family for a religious feast called a “seder,” where participants consume food associated with aspects of the exodus story; vegetables dipped in salt water represent tears shed in hardship, bitter horseradish represents difficult years of bondage and “charoset” (a wine and nut paste) represents the mortar Jews used to bond bricks while they were enslaved. Other major components of Passover celebrations include the removal of leavened food products from observers’ homes and the replacement of bread with the flatbread “matzo.” During the exodus, the fleeing population supposedly left too quickly for their bread to rise. The accidental product, being lighter and easier to carry, was thus passed down as “matzo.”

Religious holidays that encourage members to practice fasting or omitting foods are not uncommon; the Islamic holy month of Ramadan and the Jewish holy day of Yom Kippur are also two prominent events in which individuals choose to abstain from eating. However, most churches do not condone such behavior when the individual is not physically healthy or medically stable.

A 2014 study by the Journal of Eating Disorders found that believers with a superficial or doubtful relationship with God were also more likely to have disordered eating habits, poor mental health and distorted body image than those with a solid and secure relationship. While fasting is intended to strengthen one’s relationship with their God, researchers stated that religion and spirituality can provide both a basis for self-worth and values as well as a dangerous pathway toward disordered eating, concluding that restrictive holidays must be approached with caution regardless of one’s religious affiliation.

In America, where the changing landscape of domestic and foreign affairs has transformed the public identity, there exists a different perspective on religious holidays: the Public Religion Research Institute found that “no religious group is larger than those who are unaffiliated from religion.” As a result, the white Christian majority is on a clear decline, facilitating a national shift from denominational ties to cultural identities evident in evolutions such that of the Easter holiday season.