Rolling out my own red carpet

How I planned my prom asking 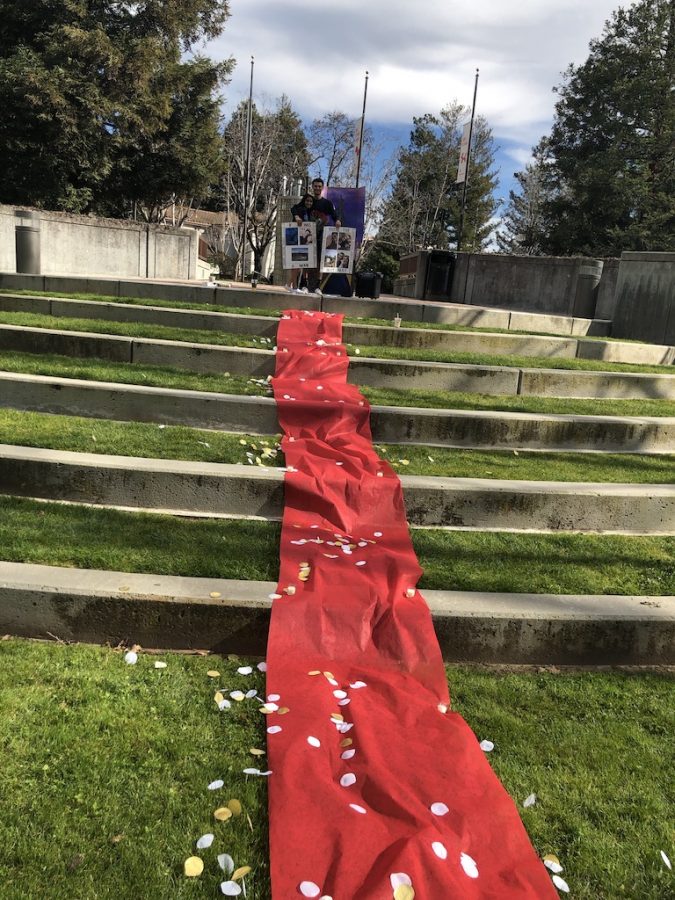 I know you’re a star

No matter how far

If life is a movie

Then you’re the best part

Prom was one of the biggest highlights of my junior year. It meant I was almost done with this stressful year, but it’s also the dance that everyone treats as a classic coming-of-age event in high school. For me, the preparation for prom was rather stressful because I wanted to make sure that every aspect of it went the way I wanted it to.

The prom stress began when I needed to come up with what to do for my asking. What made it so hard was that I wanted to make it more unique than the normal asking. I had already done what any person would generally do for a prom during the Winter Formal, making a big poster and buying flowers as a surprise for my date.

Some of my friends gave me cliché ideas like a scavenger hunt or choreographing a dance for her, but I wanted to do something big that people would remember. Having a red carpet and decorating it with candles and rose petals seemed like an exciting idea that would stand out among the other promposals, because it’s unorthodox from what people normally do. However, the biggest fear I had was not being able to find any of the supplies I needed, such as the red carpet, which could have led to scrapping the plan.

Given all of the aspects that could go wrong, I was still beyond ecstatic to execute something that I had put a lot of effort into. Every day leading up to it, all I thought about was the asking because I wanted to see everything that I had planned out be put into reality. Even all of my friends that were involved couldn’t wait for it to happen, and they put in a lot of effort to help me.

While making the posters with my friends, I couldn’t help but anticipate how it would go in a few days. I made sure that each letter was drawn precisely and that all of the coloring was clean and inside the lines. For the classic pun on the poster, I referenced a song that both of us really like: “Best Part” by Daniel Caesar. I changed the main line in the song to “If JP was a movie, you’re the best part” and made the posters look like rolls of film.

When the day of the asking came, it was all I could think about. All of our friends met at the park where I was doing the asking and we began setting it up. However, at the last minute, the wind was really strong and kept moving the red carpet. Out of all the things that could go wrong at anytime, I hadn’t seen that coming at all. I panicked and tried thinking of some way to hold the carpet down, so I put the flowers and food I bought her strategically along the carpet so it wouldn’t fly up.

Even as my date was walking towards the park, I was fixing the carpet so that it looked presentable. As she came towards the carpet, I was so nervous and was repeatedly thinking: “Did I do enough? Is she going to like it? Did everything turn out the way I wanted it to?” The whole time, I was hoping that all of my hard work would pay off and that everyone would be happy with how it turned out.

After the whole asking, she was surprised at how much we were able to accomplish without her knowledge. All of my friends were relieved because their hard work had the desired outcome, and they were all proud to have played a part in it. Everyone became really excited for prom because of how enjoyable this asking was.

In hindsight, asking someone to a dance is as much for yourself as it is for the other person. You get to come up with an interesting idea and execute something on your own from start to finish. Although stressful at the time, all of the nervousness and planning paid off, because now I can look back and be proud at what I was able to accomplish.

And when junior prom rolled around, she was indeed the best part.