MVHS faces Homestead HS for the second time in the season 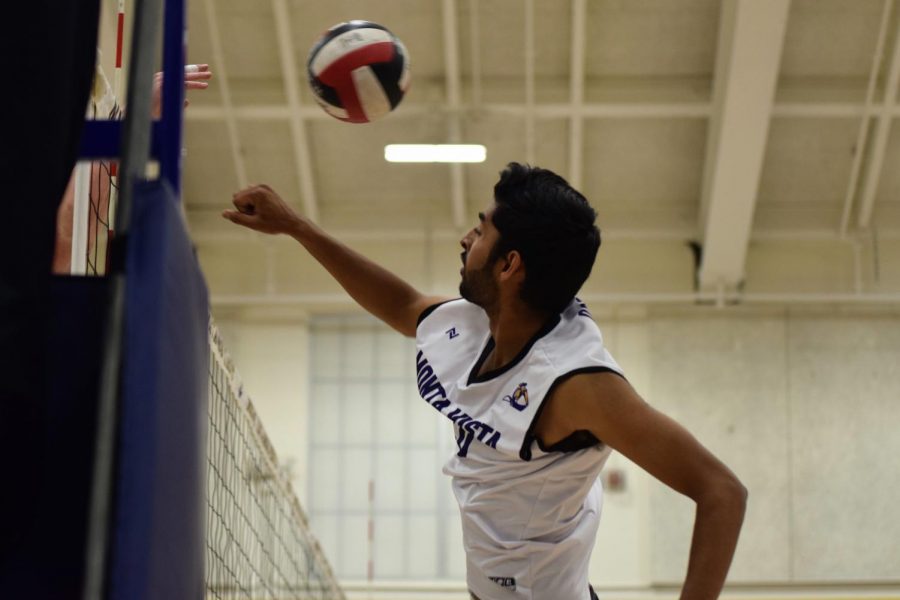 n the first game of the season, the Matadors played against Homestead HS, and though they came away with a win, MVHS ended the game with a score of 3-1, giving up one set to HHS. The Matadors met HHS on the court again on March 10, for the second time this season. While the first and second sets dragged on at a slower pace than usual for the team, who has gone undefeated this season, MVHS still swept the competition with a score of 3-0, winning each set by a score margin of at least seven points.

Though the first set began with repeated ties, the Matadors pulled away and gained a lead that they maintained through the rest of the set, ending with a score of 25-18. Unlike the first, HHS started the second set strong taking an early lead on the Matadors.However, MVHS quickly caught up, and after a timeout was called, they surpassed HHS, winning the second set 25-17.

While the Matadors won both sets, senior Nikhil Bapat believed the game and the team’s playing was mediocre.

“The game was a little rough — I don’t think we played as well as we could have,” Bapat said. “It wasn’t really up to the standard of play that we’re used to, but at the end of the day, we got the win, which is what matters.”

Bapat partly attributes the level of his play to not being in the swing of things, especially as he was sick the day before the game.

“I think I need to get back into my rhythm because I’ve been off for a little bit now,” Bapat said. “I want to do that before the season comes to an end.”

In the third set, the coach told the team that he had to leave soon to catch a flight and asked them to speed up the game. Normally, the Matadors put in their reserves to play in the third set when their team is up 2-0. Instead, they decided to put in all the starters to move the game along, and according to Bapat, “have some fun with it and just completely rush it.” In return, HHS, who noticed what MVHS was doing, tried dragging the game out as much as possible.

Still, MVHS gained momentum early in the set and kept that energy through the remainder of the game. Paired with strong offensive plays, the third set resulted in a final score of 25-10, securing their overall win 3-0.

Even with the large score margin of 15 points, senior Gautham Dasari still sees areas for improvement, particularly with some “unnecessary” hitting errors, believing the Matadors could have beat HHS by a larger score margin in the third set.

“I think the way we play is that sometimes we kind of play down to our competition,” Dasari said. “Obviously this wasn’t that good of a team, so we stooped down to their level.”

Bapat notices a similar discrepancy in the way the team plays and believes the Matadors could improve with consistency in their performance.

“I think the biggest thing is consistency because there are some days where we play, where everything is really clicking,” Bapat said. “This past weekend — the Bellarmine tournament — everything was going really well, but I think some days like today, things aren’t really on the same page, so I think [if] we can keep our level of play where we know we can play, we’ll do a lot better.”

Matching the playful tone of the third set, after HHS gathered for their team huddle, hands in the center of the circle, they chanted “Monta Vista” before breaking, lining up to high five the Matadors along the net.