Three MVHS students share the stories behind their pet chickens 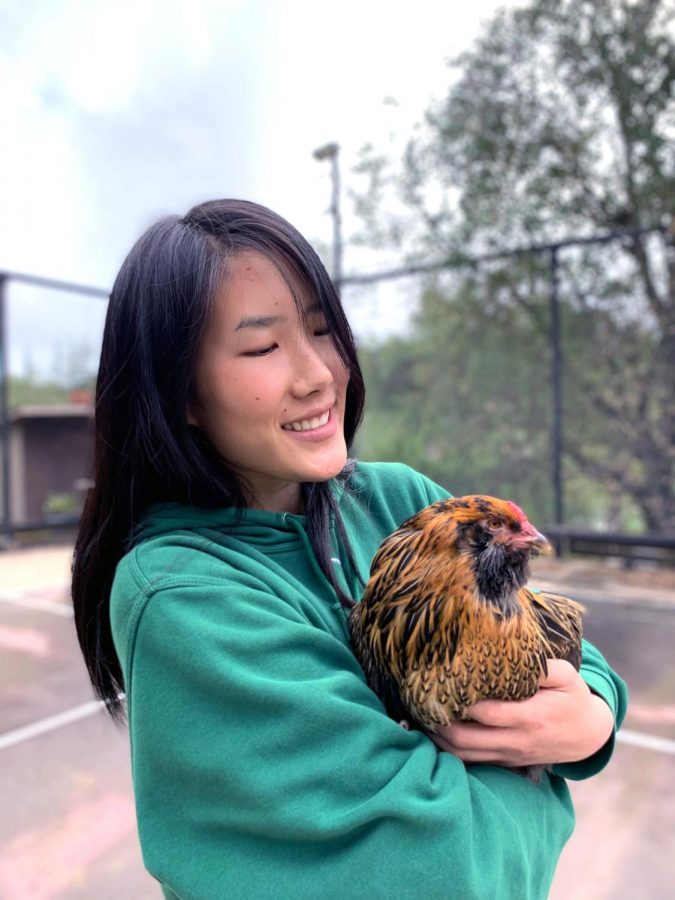 “I got you chickens” was all it took for senior Jessica Ji to spring up in bed early in the morning. Her father’s attempt to wake her had become a running joke between the two of them, always teasing her with the possibility of owning her most desired pets: chickens.

Ji had always had a strange connection to chickens, and she called her basketball teammates her ‘chickens.’ So a few years later, she was presented with four baby chickens for her birthday — Evil, Regular, Normal and Hungry — and they’ve lived in her backyard ever since. They had stayed in a backyard of a daycare that Ji’s mother had run and owned until a  student’s parents were concerned about health issues. At that point, they had to move the chickens to a property in  Los Altos Hills, which had a larger space for the chickens could roam.

“Now they’re at the other house, they have a tennis court that’s gated,” Ji said. “So sometimes when I go over with my parents, we put them out on the tennis court and let them run free and we just stand there and I feed them.”

But one day, when Ji’s mother had finished feeding them, she had accidentally left the door of the coop unlocked. It was then that Hungry escaped and was likely killed by a coyote. Ji continued to raise the remaining three chickens until they were full grown hens, to the point where they lay an abundance of eggs every day.

This year, her mom surprised her again with another brood of chicks, adding four more chickens to her flock. As Ji begins to raise them, she emphasizes that she wants to handle them more when they are young to make the chicks more familiar and comfortable with her presence and develop to be more friendly.

“If you make your hands warm, and you cup them, they’ll fall asleep in your hand,” Ji said. “It so cute and they curl up and it’s so adorable.”

There have always been a plethora of animals in the Ploshay household. But for sophomore Skylar Ploshay’s mother, except for a bird, none of the pets of the house were ever truly hers. So when her family visited her aunt’s pet chickens, everything changed.

“Actually my aunt got chickens first, little chicks, and my mom fell in love with them and of course so did I,” Ploshay said. “And so we tried to convince my dad and we actually surprised [my mother] on her birthday and we got her three little chicks and so the chickens that we got, my dad did a ton of research on.”

The family had looked into specificities of different breeds of chickens, ensuring that they chose breeds that produce the most amount of eggs. Ploshay’s chickens, Buffy, Dixie and Esther, were chosen selectively to fit the characteristics that her family wanted. The three differ in their egg colors, with Buffy, a Buff Orpington, laying a dark brown egg, Dixie, possibly a Plymouth Rock, laying a light brown egg and Esther, an Easter egger, laying a green egg. Similar to their egg color, they also differ in their personalities.

“[Buffy is] the fattest,” Ploshay said. “She is food hungry. So whenever you put food out there, she is knocking down the other [chickens] to get there first.”

When the family first received the chicks, they wanted to make sure they grew up to be more social and less reticent than her aunt’s chickens, who they had visited multiple times before.

“We [handled] them so much when they [were] younger, [especially when] they had to stay inside [the house],” Ploshay said. “And so they lived in our house for the first couple of months. And every time we’re just sitting, playing with them. And they all let you pick them up. And Buffy — she’s by far the sweetest.”

While junior Caitlin Wang was working on a literature essay, she heard squawking coming from the backyard. Thinking that her chickens were laying eggs, she paid little attention. However, she turned her head and saw a raccoon on her fence and a chicken with no head.

In fifth grade, she had bought a flock of four chickens, which she named Victor, Forest, Barack and Larry.

“Barack was really nice and polite,” Wang said. “Victor and Forest, they were very greedy and they stole all the food. Chickens have a pecking order, where the leaders of the flock would eat first, and the other chickens would eat later. Larry was the runt, so she’d eat last.”

However, of these original four, only Victor survived.

“Barack was killed by the raccoon,” Wang said. “A few years later, Larry had Marek’s Disease, where she stopped moving. Forest, I thought she was just sick, because she had signs that she had a cold. She was attacked by some animal and then the vet said that it ripped into her gastrointestinal tract and we had her euthanized.”

Nevertheless, Wang bought a new chicken, Bean, in 2018. And the future is looking bright for her.