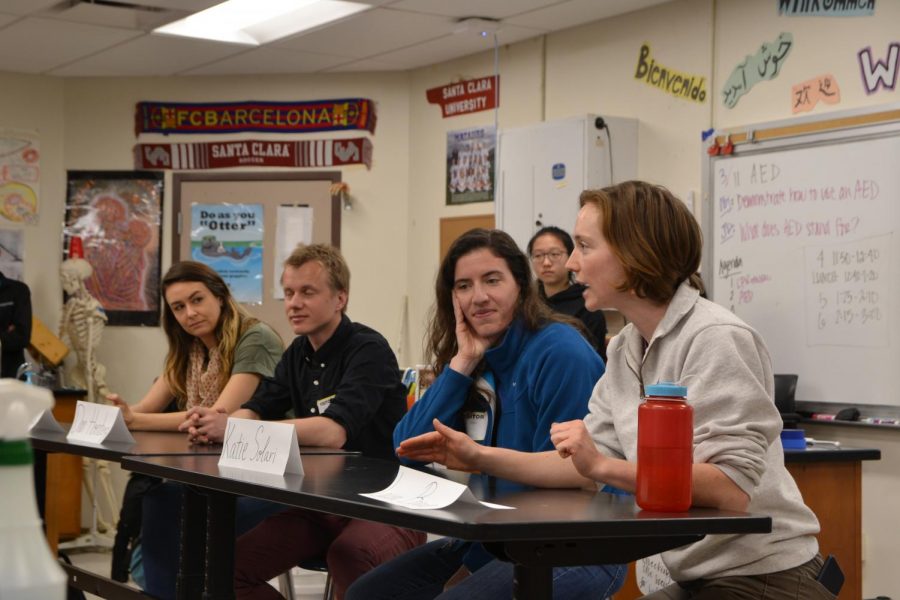 Four postdoctoral scholars from Stanford introduce themselves to students interested in their stories. Photo by Justine Ha.

On March 12, Science National Honor Society invited four Stanford graduates, Rachel Agoglia, Dan Homberg, Katie Solari and Laura Bogar, to speak at MVHS. All four of them work in biology research, studying in fields varying from fungi research to human cortical spheroids. Each of them explained their line of work, with Agoglia explaining her lab research on genetics, Homberg showing his work on how he and his lab group are working on understanding what happens before certain diseases or aging, Solari presenting photos of her trip to India researching animals and Bogar showing photos of her trips to the forest to research fungi.

With many students at MVHS interested in pursuing a career in science, the four panel members received many questions seeking advice from them.

Solari emphasized the importance of being familiar with whatever path one takes before being becoming immersed in a masters degree. Similarly, Homberg believed that money shouldn’t be the reason students choose certain majors, but instead, the amount of enjoyment the student receives from their job.

“Whatever you are getting excited about, whether it’s biology or arts, as long as you like it because you are going to spending a lot of your life doing that, and that for me was the driving motivation,” Homberg said.

On a similar note, Bogar mentioned finding jobs that are the right fit and value the student’s time.

“Seek out jobs that develop you intentionally and don’t settle for just washing someone’s dishes because all of you deserve better than that,” Bogar said.

The main key point that all four of them stressed was the significance of caring and enjoying the major the students end up choosing, with Agoglia agreeing with the others and adding on her perspective on coming to MVHS to speak to others about her experience.

“I just want to try and encourage students who are at your age level to pursue these things too if they are interested in them,” Agoglia said.