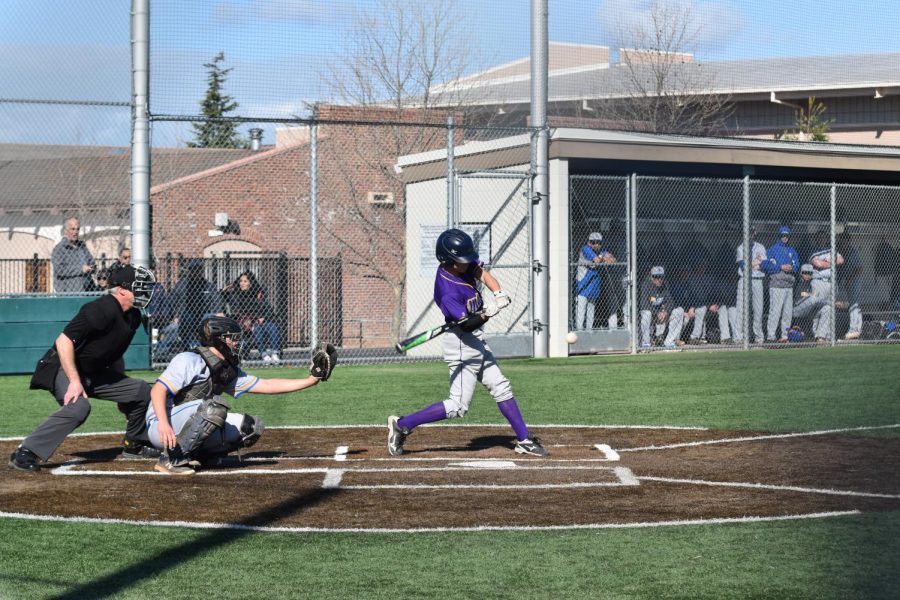 Senior and pitcher Jacob Kokeny stood atop the pitcher’s mound, passing the ball between his hand and the mitt for a few seconds before bringing his attention back to the batter, 60 feet in front of him. He looked straight towards home plate before swinging his arm back and letting the ball go. The batter swung, making a thud as the bat came into contact with the ball, before making a dash for first base.

Though this wasn’t the first time Kokeny has faced Santa Clara HS, it was his first time playing against them with the different dynamics and players of the new team, as it was the first home game of the season. Adjusting to these changes that come with the start of the season was a concern for him.

“It’s recently gotten a lot harder because we’ve lost a lot more guys, [players],” Kokeny said. “But earlier, like when I was a freshman, sophomore, [playing SCHS was] just like as any other team.”

However, according to Kokeny, having parents and friends in the bleachers cheering for them strengthened the team’s mentality, and they felt more encouraged to play.

“We felt pretty good going into the game,” Kokeny said. “A lot of us were hyped since it’s our first league game, first home opener, so we just felt ready to go out there and compete.”

The slow momentum of the game increased frustrations for the players on the field, as MVHS struggled while up to bat, while SCHS scored runs in the third, fifth and sixth innings. Despite this, the Matadors kept their energy up and pushed to score a run during their seventh inning.

Freshman Benjamin Chang, a new addition to the team, had two hits and felt satisfied with his individual performance while batting, noting his luck that the pitcher didn’t throw him any curveballs. However, playing second base during the game was an unfamiliar experience for him, which was a switch from his usual role in third base. Despite the team’s rocky start to the season, Chang hopes that with more practice, the team can keep its energy level up.

Chang believes that the team has to be more focused and score more runs, pinpointing the team’s hitting as an area to work on, especially as SCHS’ pitcher had shut out the Matadors until the seventh inning. As this will be Kokeny’s last season on the team, he hopes to give it his best and improve his technique as the season progresses, setting his sights on competing for the league title.