What happens on the court is completely up to players themselves. But, spectators enjoy impacting the play through distractions and chants 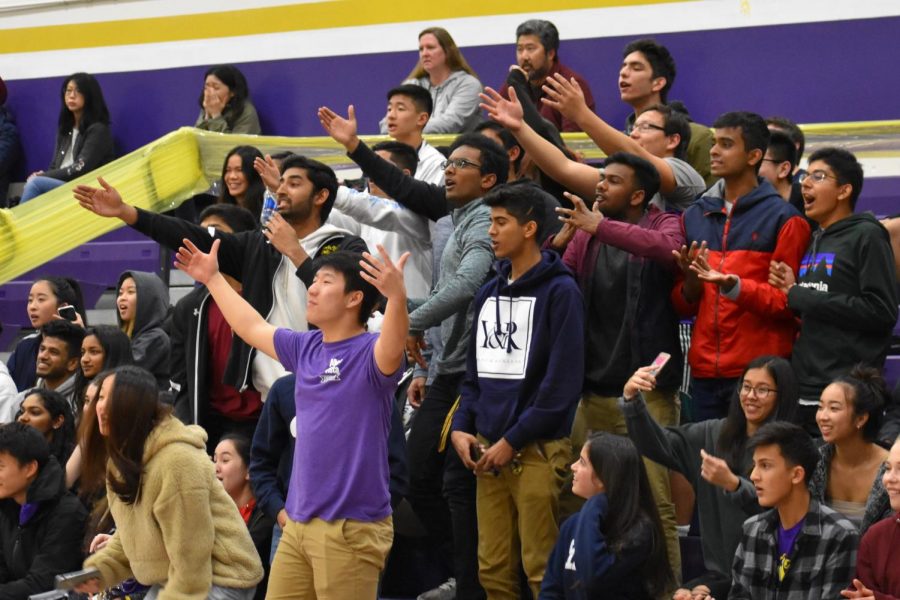 A barrage of noises filled the MVHS gym as a Santa Clara HS player meticulously bounced the ball up and down focusing on the basket 15 feet in front of him. The more he prepared himself to take the freethrow, the louder the sounds were, and the harder the ground vibrated from the stomps of the students in the bleachers.

“You guys need to knock it off,” exclaimed a SCHS parent shortly after the free throws, angered by the antics of the students. “I don’t know where your principal is but this is unacceptable.”

Some of the students laughed, and paid little attention to the woman’s remarks as they carried on with their chants. Some students felt they were justified in their actions, as it is usual for things like this to happen during a home game.

According senior Jonah Ji, trash-talking is a regular scene at sporting events, whether it be opposing players insulting one other’s abilities, making them rethink their next move or change the way they play, or spectators screaming certain phrases to demotivate the opposition.

“A lot of the times, sports takes a lot of concentration and the purpose of the chants is to not only motivate our team but to break the concentration of the opponent’s team,” Ji said. “If we could [scream] as loud as we can at a certain moment, like when someone is taking a freethrow, they are likely to mess up.”

As a member of the MVHS football team for four years, Ji has personally experienced the effect of trash-talking while playing in a game. Specifically, Ji recalls an experience when he went in at quarterback in a game at Fremont HS and how the packed bleachers affected his play.

“FHS’ crowd was roaring loud and I was unable to hear my own cadance and play after play we were messing up because the loudness was a big detriment to our game,” Ji said.

In basketball games, the spectators, specifically those in the student section, energize the game through their cheers just like the FHS’ crowd in football. One particular group of seniors  attended almost every boys basketball game, causing commotion and creating an energetic atmosphere.

“Our friends on the team just tell us about the team and what’s going on with the coaches and their play,” senior Navjeeth Pillai said. “We go to the games to show support and we did not mean to start trash-talking, but when we see out friends playing we want to give them support which we do through our talking.

The crowd can tremendously impact the game, but what happens within the lines is still the deciding factor of the game. According to the FUHSD code of conduct, profanity, trash-talking, taunting, boastful celebrations or other actions that demean individuals can result in loss of eligibility for players. However, Ji explains that players, even aware of some of these rules, use trash-talking as a tool to give them the competitive edge over their opponent.

“If I get past the person that is guarding me in during the game many of the times I’ll be like ‘You’re so sorry’ or I’ll call them weak and tell them to go to the weight room — something to just get their blood flowing and get them a little mad,” Ji said. “I can see that [the defender gets] really mad and it makes it that much easier to elude him and make a cut then break away.”

Similar to Ji, senior Ashwin Kumar, a member of the senior group spectating basketball games, has seen the effect of his words on the players on the court.

“There was one player on Santa Clara HS that told everyone in the crowd to shush, but he was playing like a**, so we all shushed him and he had an off game after that,” Kumar said. “[Trash-talking] may not help a lot, but it makes a fun atmosphere.”

However, even though crowd involvement creates an enjoyable environment, sometimes the antics can be detrimental to game itself. According to MVHS boys basketball coach Calvin Wong, the home team can suffer from some of the antics from the bleachers.

“What the crowd sometimes doesn’t understand is that something they say or do penalizes us in the game where we can get a technical foul,” Wong said. “That directly changes the score compared to just someone getting escorted out of the building for saying something inappropriate.”

However, trash-talking is not just an integral part of high school games but also recreational play. According to senior Vishnu Palaniappan, in games of pickup basketball, trash-talking enhances the nature of the games.

“During pickup basketball, my friends [and I], we just trash talk for fun just saying that the other person sucks or your hairline sucks or something stupid like that,” Palaniappan said. “Nobody takes it personal, and if anything, the trash-talking makes you want to play better and prove the other person wrong. If someone is saying like ‘Oh, he can’t shoot,’ every person would want to take the next shot and make it in order to rub it in.”

While Palaniappan believes that trash-talking is not usually used with ill intention, he pointed out that there are certain lines that can’t be crossed by the people using this tactic which include bringing up personal topics like one’s family, status or wealth. However, unlike Palaniappan, Pillai explains that even though trash-talking might be personal at times, its plainly a part of the game.

“Trash-talking has always been around in basketball,” Pillai said. “After the game if I see the other coach, I’ll be like ‘good game coach,’ showing our respect even if during the game we are causing commotion. In professional basketball in the 1990s players like Reggie Miller would always trash talk and sometimes it can get a little personal, but at the end of the day it’s all just jokes.”