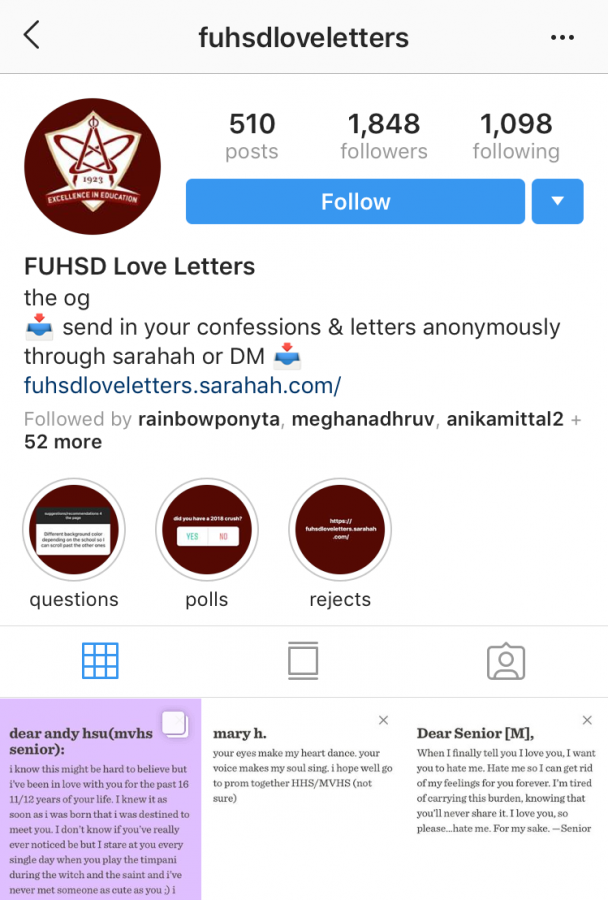 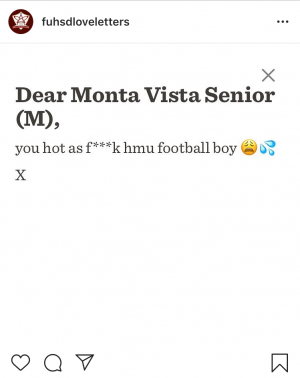 On Dec. 25, 2018, the Instagram account @fuhsdloveletters began accepting anonymous confessions and letters from all FUHSD students. Since then, it has gained over 1,800 followers and created over 500 posts ranging from enthusiastic self-love proclamations to racy sexual comments. The majority of the posts are directed toward Fremont HS and Lynbrook HS students respectively, but MVHS students have also submitted their professions.

Although the owner of the account remains anonymous, they have revealed that they attend FHS and have allowed followers to ask them questions through Instagram Stories’ question stickers. In response to numerous questions about their intentions behind the account, the anonymous owner has replied with messages such as “I just thought [people] had a lot of pent up emotion” and “I just wanted to let [people] talk about their feelings.”

Freshman Samika Swamy, who was the subject of a post in January, believes that since the account offers students the opportunity to express their feelings with minimal consequences, it has the potential to have a positive influence on students. 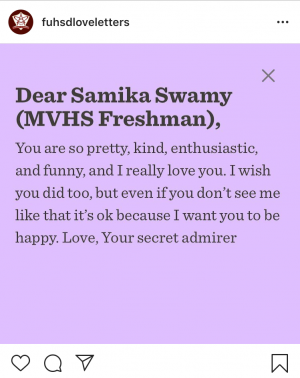 “It’s fine as long as it’s done in the right amount [because] it doesn’t really foster anything unhealthy,” Swamy said. “I think that accounts like these are good outlets for people who are, you know, afraid of being judged for what they think or what they feel.”

Yet personally, Swamy maintains that she does not consider the account to be something she takes seriously. After noticing that there were multiple posts on her feed each day, she unfollowed the account to avoid focusing too much on the submissions.

“I don’t really care, or pay attention to things like this,” Swamy said. “I have other things to do, so this isn’t really my number one priority, and I’m not going to do something about it.”

Contrary to Swamy, some students see the account as a way to have fun and tease their friends in a more lighthearted way. Even though they might not use the account for its intended purpose of submitting romantic confessions, they still try to leave positive notes for other students to read. 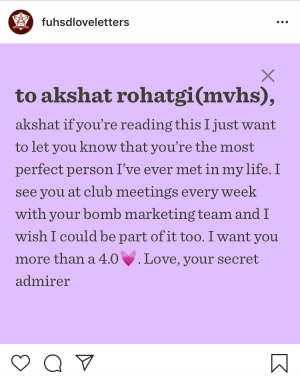 “[My friends became] invested in the account [when they first noticed it],” sophomore Akshat Rohatgi said. “We all just started writing love letters for each other and it was just like an in-the-moment-type thing [that] lasted for a day or so …. As of now, from what I’ve been seeing, it’s just a just-for-fun-type thing.”

However, there have been instances in which the owner has felt the need to filter out some submissions and grant anonymity, such as when a post is explicit or appears to be fraudulent. They have stated that they respect requests to delete posts and will reject any that are too specific or embarrassing for either party. According to Rohatgi, this kind of sentient filter is necessary for the account to preserve its honest intentions given that anonymity can be a powerful tool when abused.

“The difference between this account and [apps for anonymous submissions] is that [the owner of] this account filters some of the things that they put onto the account,” Rohatgi said. “On the apps, even though there is a filter system, it’s not always perfect, and many times it might be used as a way to like hurt or try to attack someone.”