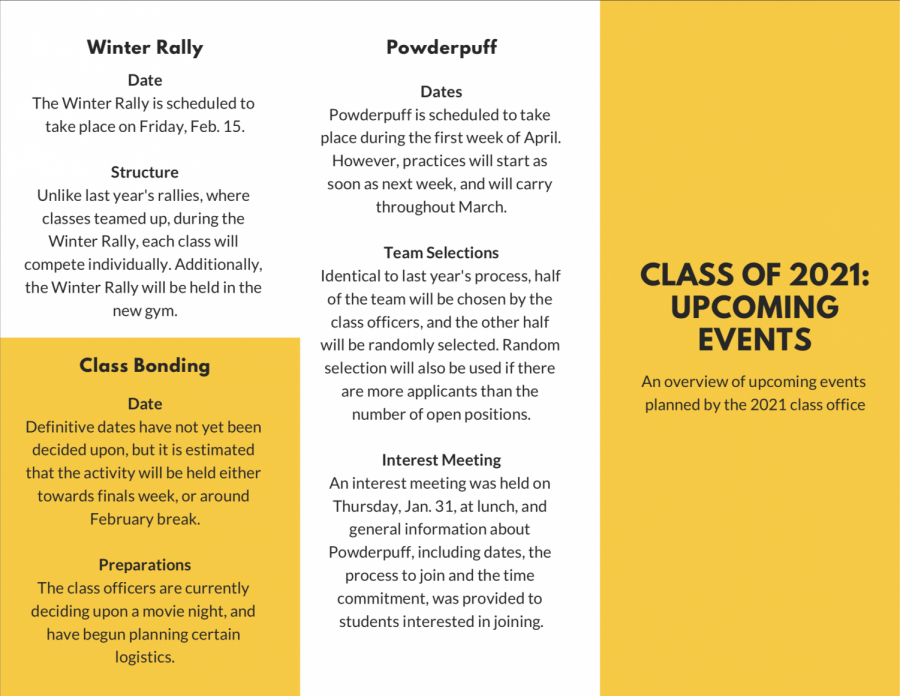 With the start of the new semester, preparations for new class-wide activities are underway, including the Winter Rally, a class movie night and Powderpuff. Sophomore and Vice President Vivian Jiang, sophomore and Treasurer Annabelle Choi and sophomore Benjamin Tang share their views on the upcoming events.

Powderpuff
In light of MVHS’s annual Powderpuff games, team selections and organization for the event have already begun. An interest meeting for those who wanted to participate was held in the auditorium on Thursday, Jan. 31 at lunch.

According to Jiang, the presentation was targeted towards freshmen, emphasizing what being a part of the team entails.

“Information about what Powderpuff is [provided] first because a lot of freshmen don’t know what the activity is,” Jiang said. “[Also,] the type of commitment that each player and cheerleader needs to have for this season and the dates and practices.”

Tang recalls how the information provided at the interest meeting swayed his initial decision of joining Powderpuff last year.

“I was originally planning to participate in Powderpuff last year, but I realized the effort to result ratio is quite low,” Tang said. “The practices take up a significant chunk of time out of each day. Nevertheless, Powderpuff is no doubt one of my favorite events of the year [and] I really enjoyed watching the games last year and cheering on my class.”

Powderpuff games are held during the first week of April, but practices start soon as next week and will run through March. While all students must apply to join the team, Powderpuff participants are not entirely chosen by the class office.

“For Powderpuff, forms are due Thursday, so it’s due in three days,” Choi said. “Based upon the people who turn in the forms, half of the people we choose based upon their athletic skills, how good they’re going to be, and then the other half is chosen by a random generator.”

The football coaches for Powderpuff have already been chosen, and the class office is focusing on choosing cheerleaders.

“We’re still in the process of figuring out who the cheerleaders are going to be, because a lot of people want to do it,” Choi said. “I know Monta Vista Dance wants to do it, and then people outside of dance, and then Cheer people, and then Song people. We’re just trying to figure out who’s going to be the best for it, but most likely, it’s going to be Cheer and Song people.”

Winter Rally
The last class-wide rally was held over four months ago during Homecoming Week in October, but the class office is planning for an upcoming Winter Rally, projected to take place on Friday, Feb. 15.  Additionally, a dodgeball tournament on Tuesday, Feb. 5, will precede the rally to determine which sub-theme of the overall theme, “Avatar,” each class will choose.

“So far, we have been planning out the overall theme of each class,” Jiang said. “On Monday, we’re going to have a dodgeball, where, in order of the rankings, the classes will choose which subtheme they are, of the overall theme.”

Unlike previous rallies this year, the Winter Rally will be held in MVHS’s new gym. The class officers have also planned this rally differently compared to last year’s rallies by eliminating the team rally structure.

“So team rallies is 2021 and 2020, and 2022 and 2019 and pair up, but we’re not doing that this year,” Choi said. “For now, we looked for dodgeball players, and the winner of the dodgeball tournament would be able to decide which element the class gets. Based upon that, we’ll have to design the poster, the rally setup, get rally gamers and figure out how we’re going to do our cheer because we might come up with a new cheer this rally.”

Class Bonding
Though a movie night was originally planned to take place during first semester, the class office has decided to instead host it this semester.

“Our advisors were too busy, so they couldn’t advise us for the class movie night that we set up, so that got pushed to this semester,” Choi said. “We’re in the process of figuring out what day we can do it. We have everything else figured out, just not what day the advisors are able to advise us.”

Choi estimates that based on timing issues, it will most likely be held towards the end of the semester.

“It’s probably going to be around finals; it’s not going to be close,” Choi said. “Or, we might do two, we’re thinking of either doing a class movie night or a class game night; we’re not sure yet.

So far, only basic preparations have been made.

“We’ve started deciding what type of bonding we want to do,” Jiang said. “Also, how exactly we’re going to serve food [and] are we going to have admission.”

Tang believes class bonding events are infrequent, but he is nevertheless excited for the upcoming movie night.

“I do not frequently attend class bonding events, and unfortunately I do not know many people who regularly do,” Tang said. “However, I think the idea of having fun and relaxing bonding events is good, and I look forward to a movie night with my friends.”

Check out the infographic below to find out what upcoming events the 2021 class office is preparing for.