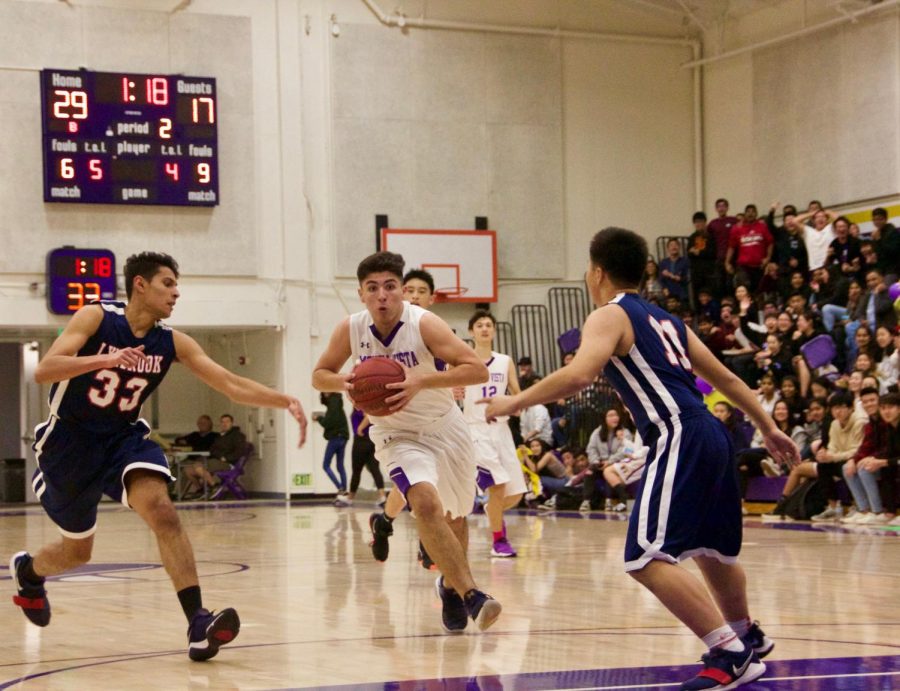 Chants rang across the gym. MVHS students yelled and stomped in the bleachers, trying to distract the Lynbrook HS players every time they shot from the free-throw line. Other MVHS students cheered on their friends on the team, standing up and shouting every time an MVHS player scored.

This explosion of energy in the crowd trickled down onto the court itself as the MVHS players played passionately with the crowd behind them. The Matadors dominated throughout the entire game —  especially defensively — winning 66-57.

MVHS had faced off against LHS in their first game of the new year, losing 46-40 in a lackadaisical game. Heading into this game, the Matadors focused on bringing more intensity, something they lacked in their previous matchup.

“We wanted to improve our spirit,” sophomore and guard Matthew Whong said. “We came into that first game against Lynbrook with no spirit, we were really quiet and our warm ups were laid back. However, when we came into this game we were loud and we were hyped, ready to face off.”

Senior Manu Kondapaneni attempts a dunk in the second quarter after landing one in warmups before the game.

The game started off the way Whong and the team hoped for, with fast paced plays and a lot of energy. The Matadors succeeded defensively, getting multiple steals and blocks throughout the first half. Some of the players fed off the crowd, such as senior Manu Kondapaneni, who attempted, but missed, a dunk off a fastbreak in the beginning of the second quarter after landing one during warmups. The defensive success gave MVHS ample opportunities to score and they took an early 34-23 lead heading into halftime.

Senior guard AJ Falak sinks a buzzer-beater shot at the end of the third quarter. Falak lead the Matadors scoring 28 points in the game.

Though the Matadors started the fourth quarter with a sizeable 19-point lead, the team’s energy seemed to dissipate as the quarter progressed. Tension crackled in the air as LHS went on a long run, closing the gap to only four points with 40 seconds remaining on the clock. Senior Manu Kondapaneni expressed his disappointment during the finals seconds of the game.

“If [the game] is close all the way through then we’re fine with it, but when we’re blowing a team out like that, you want to finish what you started,” Kondapaneni said. “You want to be able to close out solid, because it doesn’t as feel good if you don’t come down and lose the second half.”