Recommendation letters from a different perspective 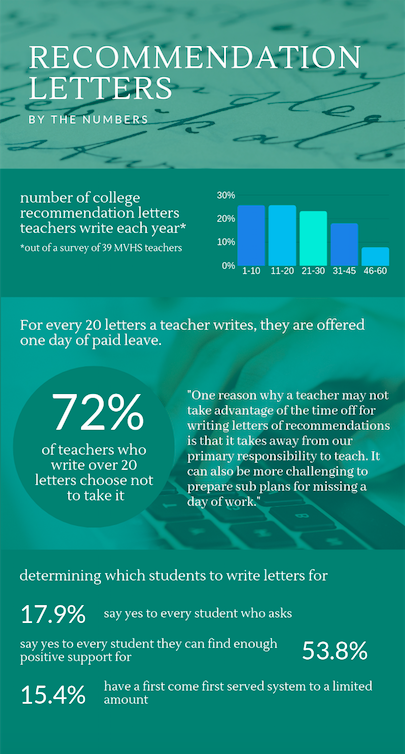 leaf floats gently from the trees, joining the array of other vibrant reds and oranges fluttering to the ground. A chilly breeze whispers through the air, rustling the leaves as it passes by. Autumn has come, and for seniors, that means it’s college application season.

They scramble to write their essays, anxiously attempting to find that perfect topic to write about and to cut down the word count before the deadline. However, as stressed as many students may be feeling, teachers are facing their own struggle regarding college applications. Chemistry teacher Kavita Gupta, who teaches mostly juniors, receives many requests for letters of recommendation, and feels that writing letters is a difficult process.

“It is just so much work to write a letter thoughtfully,” Gupta said. “Because if you are writing for a student, you really need to understand [who they] are, what makes them unique. [You need to] show their uniqueness and years of experience with them to the colleges in one page. So it is a lot of work because [you’re] first reading and understanding, then you’re trying to create a storyline for them and then you are actually writing.”

Besides the work of writing the letter itself, another obstacle is finding the time for it, especially as fall coincides with two grading periods and no school breaks. With the many recommendation letter requests she receives, Gupta feels that the high demand is more than what she is able to accomplish adequately.

“It’s difficult finding time to write the letters when there’s so much,” Gupta said. “I wish I had more time to write a letter for each of the deserving students, but I don’t have that. So I need to do a lottery just to keep my sanity and minimize or just manage my workload.”

Literature teacher Scott Perry agrees that the responsibilities he already has as a teacher, especially a first-year teacher, limits the time he has to help students with the college application process. He recalls spending the whole weekend before the first due date for the SSR forms completing them.

“It was a funny story,” Perry said. “My very first letter was a student that I had last year, a really wonderful student, I was glad to help him. But somehow he didn’t understand the deadline. And this was for Oxford University. He came to me the day before, and he needed this letter to go to Oxford the next day. And he was so nice, and we worked it out. We sent it off to Oxford, which I thought that was my very first one, and [it was] like, ‘Whoa.’”

Perry was somewhat nervous to write his first letter, as he was unsure of what he was supposed to do, but he still didn’t think it was too difficult once he got started, especially since he enjoys writing letters.

Music teacher Ricky Alegria, however, feels that there can be challenges when writing a letter, especially with students that he doesn’t know as well, compared to those that he has had for multiple years and are very involved in the music program. Despite this, he never denies a request for a letter of recommendation.

“I don’t think I have [denied a request] once in the eight years I’ve been teaching,” Alegria said. “Because I consider it part of the job and, you know, I’ll do anything for my students if it’ll help them in the future.”

However, he feels that being a music teacher in such a STEM focused school like MVHS unfortunately has a negative effect, as students often ask for letters from academic teachers instead of those in music or art.

“Whether it’s where they choose to apply, or maybe the counselors give them a certain piece of instruction, or maybe it’s just whatever the perception is, it seems like most students want a letter of rec from an academic teacher,” Alegria said. “That’s what their application calls for, that’s what they feel that they need.”

Due to this, Algeria feels he loses the opportunity to write as many letters as he wants to, even for students that he would potentially be able to easily write a good recommendation for.

“I have students for four years and I get to know them very well,” Alegria said. “And they didn’t ask for a letter of rec, because it said they needed it from an academic teacher. And so they go through their English, math and science [teachers] first, and then if they’re doing something music specific then they’ll ask me. So it kind of has a weird kind of reversal in that sense.”

Perry is also eager to write recommendations for his students. However, even though he was relatively lenient with the deadlines for letter requests this year, he plans to be stricter with them next year to allow him to manage his time.

“In the future I’m going to talk to all of my students,” Perry said. “Because I’d love to write [a letter for] all my 11th graders this year. I will be excited to write a letter for them, but they can’t just ask me two weeks before because it’s a big process.”

Gupta also feels that getting sufficient time to write recommendations is important, and would like the system to reflect that.

“My wish is that there is time built in the day for writing this,” Gupta said. “If not, there is compensation for doing that because it is a significant amount of work and some of the teachers that mostly have junior students get to write lot more than other teachers. So I think it is only fair to think about how to create a structure to support this important thing and students’ lives.”

This year, as part of the school goal of stabilizing student and staff stress, the administration implemented a policy of giving teachers a one day paid leave for every 20 letters they write. However, Gupta feels that this system does not work for her, as she can’t write the letters all at once, instead breaking it up into separate chunks of time to write. In addition, each letter takes her around three to four hours, so a single day would not be sufficient for 20 letters.

Despite that, she is still happy to write letters for her students and for the opportunity it lends her to know them better.

“I really appreciate a chance to getting to know my students deeper,” Gupta said. “When you write the letters you understand and know them in a way that is hard to do during a regular academic year. I really appreciate that and I appreciate being part of their next steps in life.”