How MVHS fall teams bring their season to a close 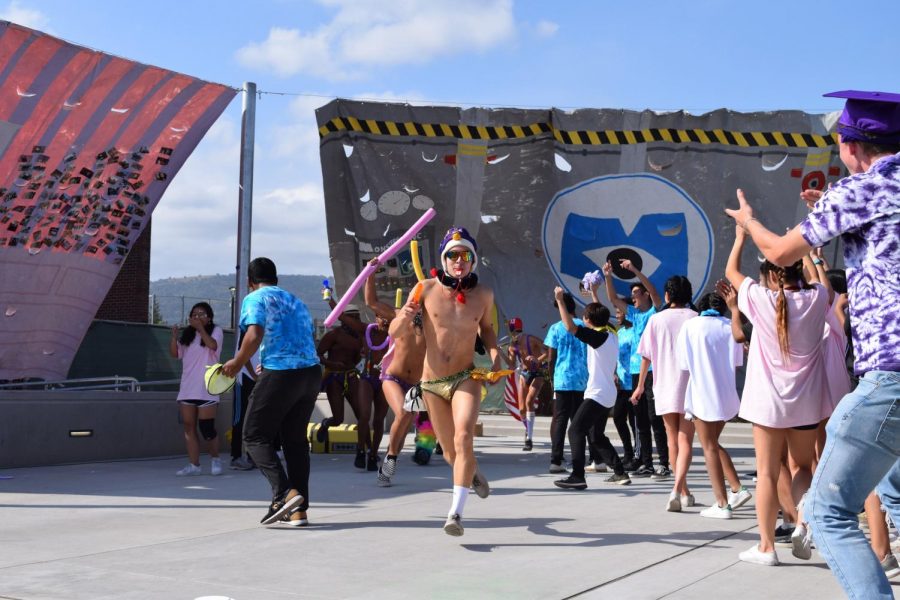 Water polo team member Bill Deacon runs through the stage after the conclusion to the senior homecoming skit. Photo by Alyssa Hui.

The music stopped as the senior homecoming skit came to a close. The crowd started to disperse from the rally court, but an eruption of cheers rose from near the cafeteria. The cheers traveled closer to the rally stage as a group of students in swimwear shorts paved their way through the crowd. It was time for the annual speedo run.

Every year, different teams at MVHS celebrate the end of their season in unique ways. For boys water polo, the team participates in the speedo run which is a tradition that has been a part of the school for a number of years, according to team member and senior Sujay Bhatt. The varsity team, dressed in its game attire, run through the homecoming crowd at the end of the last skit, flashing  colorful props and blowing on loud whistles. It was Bhatt’s second year participating in the run, but he sees it as something more than just a comedic thing.

“I think it’s more of celebration of the end of the season more than promoting senior night because we do that on social media,” Bhatt said. “I also think of it as more of a fun thing itself which is bonding experience for people on the team over something that’s not water polo related.”

Other sports, like field hockey, hold festive competitions to increase the bonding with the team.  Since their season finished the week of Halloween, the team had a contest to see who could break a pumpkin with a shot from a variety of distances. Another tradition for field hockey is player-run practices, which is when players act as coaches coming up with drills to do during the practice.

“The captain’s practice is [when] the captains have to plan a practice and send it to the coach and it has to get approved,” senior Sureena Hukkoo said. “There’s also a senior practice which is the same exact thing but with seniors running it.”

“San Diego was an emotional trip because we lost really close the first match,” Vijay said. “I think we got really close sitting in that car ride for 10 hours together… And then all the team dinners it really just helped us work together.”

Since field hockey struggled in the season finishing with a record of 0-16-2, Hukkoo saw these traditions as a way to still have fun near the end of the season despite the team’s inability to perform on the field.

“I think that the traditions are something that always represent the end of the season which is always sad, sad hours,” Hukkoo said. “I don’t have to do as much because I’m a senior and [the younger team members] are doing it for us. I felt so grateful and appreciated and very reflective during my time.”