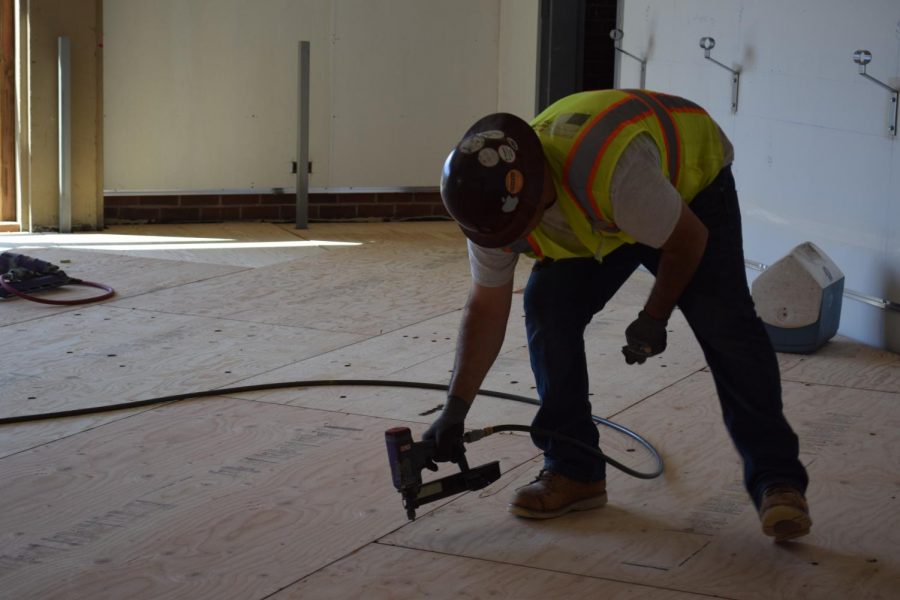 Dead spots, an open space in the ceiling and a missing entrance. According to principal Ben Clausnitzer, these are some of the problems scheduled to be fixed as a part of the MVHS 2018 gym construction hoping to conclude by the end of October. The construction plans include upgrading the gym floors and adding new classrooms, a dance studio and two team holding rooms on the second floor for visitor teams.

Additionally, the counselors’ offices are being renovated to establish a more private and confidential space, as well as an addition of a seating area for those waiting for appointments.

Clausnitzer also wanted to institute a distinct entrance to the gym from the parking lot. The construction also includes additional concrete and landscaping work to the exterior for a more obvious pathway to the gym.

“If you are driving into Monta Vista and you’re parking, and you’re looking ‘Where’s the gym?’” Clausnitzer said. “In the past it was always kind of awkward, people would be like ‘Well there’s these portables and I don’t know there’s [a] gate there and there’s the fields and tennis [courts], there’s that big building, maybe that’s the gym.’ Versus now, where there is a big beautiful entrance.”

Unfortunately, much was put on hold when the construction company, Lathrop, found asbestos underneath the floors of the gym. Due to this discovery, the completion deadline was delayed by a couple of weeks, which ultimately impacted homecoming week. The lost time was dedicated to an extensive and necessary removal of asbestos, which could have long-term health risks.

Last year, the announcements stated the construction would be finished by the end of September, just in time for the Homecoming rally. With the delay, leadership decided to hold the rally in the newly renovated rally court for the first time.

Senior and vice president of the 2019 class Victoria Tung has experienced some difficulty rescheduling the logistics of the rally due to the location change. Tung believed that some of the traditional elements of a rally would be lost due to not hosting it enclosed area. Some of the original components had to be taken out or altered like the posters, games and the cheers. The biggest issue that leadership faced was the seating of each class around the rally court stage.

“The rally games have to be designed in a specific way so that people can see [the action],” Tung said. “It’s also sometimes hard to hear and it just feels different because you can’t see the two other classes.”

Senior class president Ashika Jaiswal echoed the same challenges. Though she admitted that she was worried that the authenticity and cheers would not be completely felt in a open space like the rally court, Jaiswal had faith that the MVHS’ spirit and hype would not change.

“The good quality of the gym [was that] it encaptured everyone into this small space and that resulted in a different feeling,” Jaiswal said. “But even without the gym, the spirit and the cheers, all of that rally elements will still be there. It would just be in a different location.”

She also explains that during the rally the locations of the classes was one of the largest issue leadership had to deal with. Leadership wanted to make sure that all the classes had a view of the stage, so it became an issue when trying fit all the rally-goers.

“So spacing was our biggest concern,” Jaiswal said.”Because originally it was going to be seniors and juniors sitting on the stairs but the we realize how many seniors and juniors there are. So last minute during third period we changed it so it was just seniors on the steps and the other classes will be on the other side [of the stage].”

Jaiswal nonetheless feels like the rally was able to run smoothly. Despite the many obstacles in planning that she faced, the show kept going.

“Judging by the fact that it was our first time, I actually enjoyed it and I thought it was really interesting,” Jaiswal said. “I thought it was different and I felt like everybody around me was having a good time.”