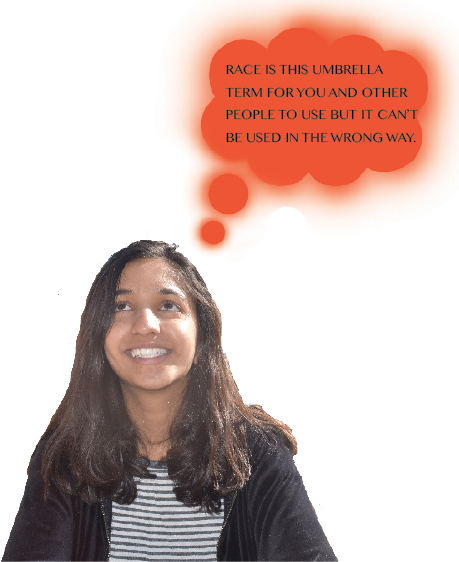 A witty comment or two to entertain a bored audience, to relieve an awkward silence or to have a shield to bounce back on after an embarrassing moment. Humor is the natural human response to something surprising or unexpected, used across all cultures. Yet sometimes, when looking for something to poke fun at, the target falls on ourselves — or rather, a group we belong to.

According to FUHSD, MVHS’s population is 79.4% Asian, and sophomore Jharna Suresh believes that as a result, a large part of the school culture involves joking about one’s own race. In a survey of 385 MVHS students, 82% think making fun of your own race is a common occurrence at MVHS.

Suresh believes it’s a common occurence to hear people make stereotypical and self-deprecating jokes relating to their own cultures, especially when it comes to test scores and grades. For example, people may say things along the lines of “I got a 94 percent on my test, and my parents are going to kill me because they’re Indian.”

Sophomore Jackie Liu hears jokes like these frequently as well, but has conflicting feelings about them.

“I can understand why people would be okay with it,” Liu said. “If you’re of the race [you’re making fun of] and you’re okay with it, I don’t see why not. If [the joke] isn’t funny, and it really is offensive and you’re being overly aggressive, then it’s not okay.”

Suresh believes that ridiculing your own race is akin to making fun of yourself, and this parallel can have many implications of its own. She also acknowledges the tendencies of people to use race as an excuse or reason for the issues they face in their day to day lives.

“When you’re making fun of someone else that’s bullying, and I think that can apply to race too,” Suresh said. “Race is this umbrella term for you and other people to use [and identify with], but it can’t be used in the wrong way. [A lot of people say things like] ‘Our parents are gonna be mad at us because they’re Indian,’ when in reality, they’re mad … because they want you to do well in school and succeed.”

Chinese teacher I-Chu Chang thinks the acceptability of joking about one’s own race depends on the situation, but is generally alright, especially if everyone present understands the culture and background. She also agrees with Suresh about the parallels between self deprecation and making fun of your racial identity, as well as how being racist to other groups can be seen as a form of bullying.

“I don’t like the idea of joking [about] another race because sometimes we are just not thinking and not really being respectful,” Chang said. “But to [make fun of] one’s self, to me, is more acceptable.”

However, Suresh believes that making racist remarks and comments about your own race can play a large role in reinforcing stereotypes. This can add to negative stigmas surrounding a particular minority group. She agrees that a lot of existing stereotypes are a product of outside influences, but the people who make up that minority group also have a role in either dispelling or reinforcing these stereotypes.

“If I go around telling people that my mom said something [derogatory], the fact that she’s Indian would [make other people think] ‘Oh a lot of Indian parents do this,’” Suresh said. “It would create and reinforce stigmas around that race, and would allow people to make hasty generalizations.”

While everyone acknowledges that there may be negative effects from poking fun at one’s own race, Liu believes that its effects can often be blown out of proportion.

“I feel that especially in this day and age, a lot of people get offended really easily,” Liu said. “Someone can make a really generalized statement pertaining to anything and someone can take it too personally.”

Ultimately, Suresh believes that there needs to be a balance between making light-hearted comments about your own race and recognizing when a joke can go too far.

“If you’re just mocking your mother with an accent [and there’s no ill intent], by all means go for it,” Suresh said. “But if it’s taken to an extreme where you’re putting down your own race saying something along the lines of ‘I wish I was some other race,’ that’s when it shouldn’t be acceptable.”