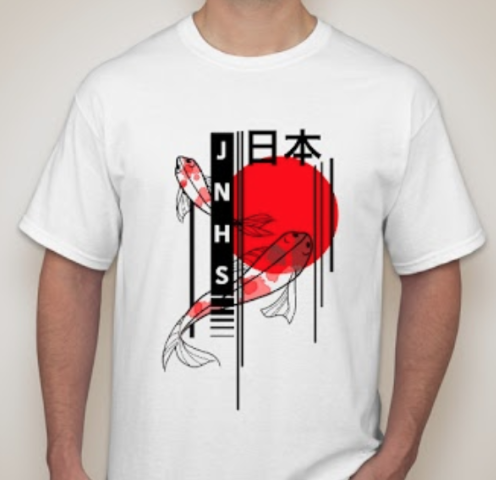 Japanese National Honor Society recently presented their winning design for the 2018-19 club t-shirt design contest. For the second year in a row, the winner of the contest was secretary and senior Christina Wu. She is thankful and excited about her contributions to the club.

As of Oct. 18, JNHS has sent out an apparel interest form to their club members asking if anyone would be interested in purchasing a shirt, and if not, what was the factor that was preventing them from purchasing the shirt. The responses collected from this form would then help the officer team gauge the level of interest and manage the pricing for the apparel.

As the apparel interest form continues to receive responses and positive feedback, JNHS is excited for their final product. Wu’s design was made up of a red circle and fish, the former influenced by the Japanese flag and the latter a symbol that is frequently referred to in Japan.

“I used the Japanese flag and their koi fish since we did a koi dance a few years ago and it is a symbolic animal in Japan,” Wu said. “I’m happy that others are happy and satisfied with the design.”

Design submissions were open from Sept. 4 to Sept. 19 on the JNHS Facebook group. The criteria for design submissions was rather simple: the shirts had to have “Monta Vista JNHS 2018-19” and be created on Custom Ink, a website for shirt design. Sophomore and officer in training Joshua Ho is satisfied with the final design, as he believes that it resembles the ideals of the club and highlights the importance of the Japanese culture.

“I think that the winning design looks really unique and cool,” Ho said. “It represents different aspects of Japan with the fish and the flag.”

After all the designs were submitted, the voting of the final design opened on Oct. 7 and closed Oct. 12. The final design was selected by the club members through an online poll posted on the JNHS Facebook group and emailed out to all the members. The form allowed each person to vote for one front and one back design. After the designs were finalized, Wu went back and edited her design to match the winning back design. A few days after the poll closed, senior and Vice President Sophia Liu publicly announced the winning designs to the club members.

“Right now there is an interest form that is out for people in our club to fill out if they are interested in purchasing a shirt,” Liu said. “We have also had a few of our members from past years reach out to us because they wanted to buy one.”