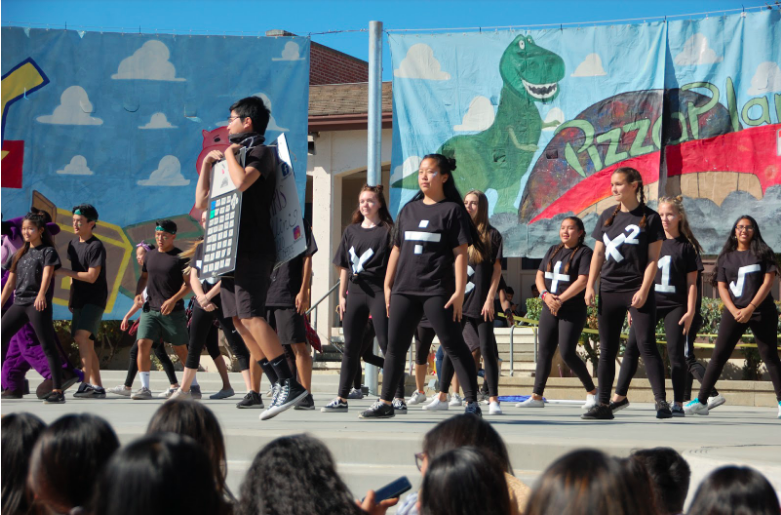 The shock on senior class members’ faces. The collective cheer from the junior class derived from the surprise twist. The excitement of watching skits being put together with hours of labor is replaced by the nervous anticipation at the rally as students’ curiosity regarding the winner of Homecoming unravel. This year, there was an unexpected result as the juniors claimed victory.

Throughout Homecoming week, the MVHS leadership team was able to witness their hard work unfold into success. Leadership member and junior Dan Sachs helped the class officers prepare for the junior skit that took place on Monday. According to Sachs, the 2020 officers arrived earlier to set up for the Homecoming Dance, featuring props that were made for the homecoming skit from the different classes.

Aside from the skit, other events required a considerable amount of planning, such as the lunchtime games. Junior and 2020 vice president Matthew Cho says there was more participation in the games than in prior years.

“I thought it was so great to have people usually you wouldn’t see,” Cho said. “I reached out to certain people who really like doing math competitions and they were like super excited like, ‘Oh my god, do I sign up [to participate]?’ People who watched a lot of Pixar movies — they were really excited to sign up, so it was really nice to see how like it wasn’t just the same people coming through over and over again.”

Sachs agreed with the importance of having people excited and participating in the games, which he also believes improved this year.

“Every class had a lot more participation in past years, in my opinion,” Sachs said. “We really worked hard to get our class to participate. I’m glad that we all did [and] that everyone’s having fun.”

The officers and the rest of the leadership class’ hard work paid off when they found out that they had won homecoming, especially as the expectation was for the seniors to win. Class of 2020 president and junior Brett Park explains why they were so ecstatic.

“I was really happy because in leadership, we talked about this a lot. [The reason] why we have competition is [that] we have passion from the class,” Park said. “And that passion helps [grow] participation. When you do win a competition, you get validation for the class, so I felt really good.”

In addition to the feeling of excitement and pride, Sachs also expressed sympathy for the seniors. However, he is still pleased with the juniors’ performance.

“I think that it adds a little more excitement because for juniors, who like worked really hard this week, we’re really happy that we won,” Sachs said. “For those who think that their classes didn’t do as well as they could have. They also are having fun, and I really hope that everyone comes together.”

Cho agreed that despite everything, the juniors still deserved their victory, in addition to proving the competition isn’t simply rigged.

“I’m just proud of my class,” Cho said. “We shouldn’t be sorry that we won [because] we’ve worked hard to get here. We spent countless hours practicing dances, doing backdrops, making sure we had everything together and I think that paid off. We should be happy for it.”