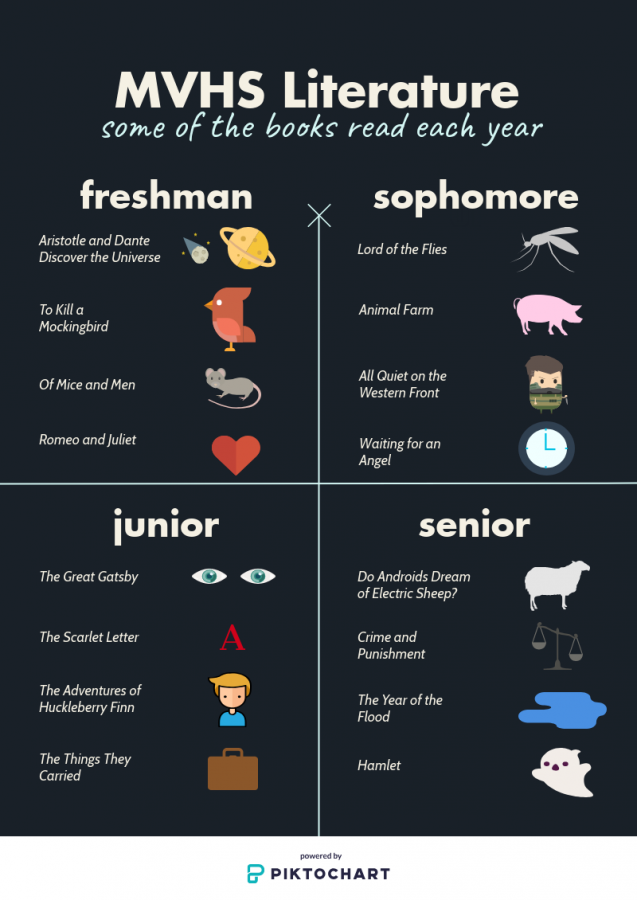 iterature remains the only course at MVHS that students must take for all four years of high school. For some, it’s an enjoyable experience, while for others, it does nothing but elicit groans of distaste. Whether the novel is about a tragic love story (‘Romeo and Juliet’), the crumbling society of a group of boys stranded on an uninhabited island (‘Lord of the Flies’) or the post-apocalyptic San Francisco after Earth’s nuclear global war (‘Do Androids Dream of Electric Sheep?’), these vastly different books do share one thing in common: they are the subject of countless annotations and literary analysis essays.

Literature teacher David Clarke says that the analysis of these books can definitely become boring, but this boredom stems from a variety of factors: for example, the time of day, the teaching style and the interplay between the student and teacher. Some students find certain teaching styles easier to handle, while others find them more challenging.

“I’m really less concerned with literary vocabulary and the mechanics of the text,” Clarke said. “I don’t think authors write books to show that they know how to do satire or how to create metaphors, but that’s my own sort of feeling about it.”

Sophomore Roya Ahmadi is in favor of analyzing and interpreting books, but she points out one of her exceptions: Lord of the Flies.

“[For some books] there are things you can definitely analyze,” Ahmadi said. “But I think Lord of the Flies is definitely one of those where it’s the same topic of human nature and community that’s being analyzed over and over again. So in this case, I’d say [my feelings] about it are a little bit more negative.”

According to Clarke, choosing Lord of the Flies as the first book to read sophomore year has a purpose — it is heavy handedly symbolic and relatively simple to look for literary devices and symbolism within.

“I would definitely understand why some kids [face frustration] while reading Lord of the Flies,” Clarke said. “Particularly bright, intuitive students might look at the amount of time being spent on pounding away at stuff that’s pretty obvious to them and feel frustrated.”

Not all students feel this way, however. Sophomore Kavya Patel shares the same sentiments as Ahmadi when it comes to analyzing novels in literature — she loves some of them, such as Of Mice and Men and To Kill a Mockingbird, but others like Romeo and Juliet weren’t as enjoyable. However, Patel has never thought of analysis as a negative experience.

“It did help me understand the book on a deeper level,” Patel said. “But I don’t think it impacted my enjoyment.”

Before literature teachers teach books in their classes, they generally come to a consensus about which ones to teach. All literature classes at MVHS generally teach the same ones in same courses, such as in Honors American Literature or AP Literature.

To a large extent, there is a lot of free choice when it comes to making decisions about books. However, there are constraints in terms of finances. If teachers were to keep changing books, they would need to constantly buy new books, which in turn becomes a financial concern. However, many students and teachers are content with the current books on the syllabi.

“Especially books like To Kill a Mockingbird, for example, there are things that you can really analyze,” Ahmadi said. “There are a lot of layers to that analysis, so it’s interesting and retargeting different aspects of the book, which makes me like the book. It’s not like ‘Oh, we keep analyzing the same chapter for like, five days,’ which would be boring — but in this case, it’s actually pretty interesting.”

Patel feels the same way and loves literary analysis that has the tendency to be more difficult or allow her delve deep within the book, because that’s what she believes makes a book worth reading.

Similarly, Clarke says he never gets tired of teaching the same books over and over again, even though he has been a teacher for 15 years.

“Ever year, it’s different; the books really change from year to year for me,” Clarke said. “There’s just some books, just like there are some movies, that you would be willing to read over and over again.”