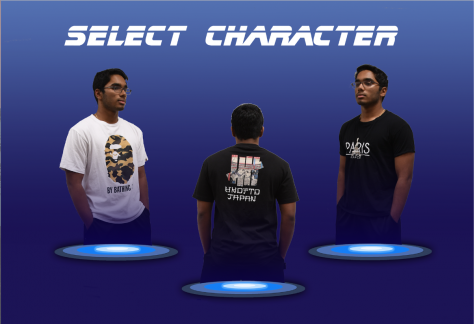 As he stood there in the familiar back alley, the memories of all the hours he had spent skating with friends came rushing back. The simple background of the alley was seemingly fit for a photoshoot, the off-white and beige colors in beautiful contrast with the dark colors of the outfit he had coordinated. Flutters of excitement and anxiety skipped around in his mind in anticipation of the challenge that lay ahead of him.

Unfolding the pitch-black shirt that his friend brought him from France, junior Vinay Sangamalli hesitated for just a second. As nice as the shirt was, it was a far cry away from his usual brands, like Bape and Supreme. Taking a photo in that alley with such a simplistic outfit would be a move out of his comfort zone. But after taking that picture, he knew in that moment the experience would be an event he would remember.

Before running an Instagram account with an accumulation of over 600 followers, Sangamalli says his account was initially just a collection of random posts, disregarding what others thought about his account. But after a change of heart, he archived the more important posts and began posting less often, more meaningfully. Posts now record memories that carry significant value to Sangamalli; what was once an account filled with spam pictures had become his outlet, a creative way to express himself through fashion photography.

“Everything I post speaks to me,” Sangamalli said. “I started seeing photos as an art, a form of self-expression. So even if we go to the same spot and take photos there, the photo that I take would be completely different from a photo that you would try to take.”

For senior Vincent Tran, social media platforms are used as “one big hub” to connect people around the world; he uses such platforms to communicate with his friends in southern California, engage with new people and make new friends. However, Tran self-admittedly portrays a curated lifestyle and believes that social media platforms inaccurately represent a user’s real life.

“People online, they hear of me sometimes before they actually meet me,” Tran said. “On Instagram, there’s always quick add features and stuff so people can just be like ‘Oh, recommended, follow this person.’ It’s a matter of how you want to be seen.”

To extend on this idea, Sangamalli agrees with Tran that social media doesn’t represent an individual’s essence in its entirety. Rather, he believes that these platforms are an extension of a user’s curated lifestyle.

“I don’t really have a problem with it, I don’t judge people or have negative feelings about anyone who does that,” Sangamalli said. “To me each person’s account is how they choose to express themselves: how they document memories, good experiences, fun they had doing things with their friends. And everybody will do that in their own way.”

Student advocate Richard Prinz agrees that it’s logical and reasonable for people to curate their lifestyles on social media. To him, it is the responsibility of the poster’s audience to realize that what they see is a mere snapshot, a mere scrap of everything that goes on in somebody’s life.

“Studies show there’s a lot of depression from social media, and it’s because people think their lives are not as good as others’, that their life isn’t as good as the people they are watching,” Prinz said. “Everybody’s lives are full of happy moments and sad moments and difficulty and things to celebrate, but people aren’t going to go and say, ‘Oh, look at all my garbage.’”

Additionally, Prinz believes that relationships initiated online cannot substitute the quality that real life interaction supplies. He notes that physical interaction is vital for an individual’s wellbeing, referencing studies on children and personal interactions with students.

“If you’re in front of your screen and you’re having relationships on the screen, then you’re not practicing having them in real life and being there with the person and interacting in that way,” Prinz said. “I see addictions, and then [students] neglect other parts of their life, like their studies and their sleep. You get so lost in it that it starts causing physical problems.”

Contrary to Prinz’s comment about peer comparison and detrimental effects, junior Heather Bassman says her page is solely for herself. Bassman’s posts are curated for herself, and not for the pleasure of others.

“I probably don’t look good in most of the stuff I post,” Bassman said. “But I post it because the event had a sentimental value to me, not because it’s for aesthetic. For Snapchat, a lot of it is just posting stuff I do on the daily, even if nobody really cares. And for Instagram, even if it’s kind of embarrassing, it’s more fun.”

On the other hand, Tran and Sangamalli are conscious of the criteria and the relevance of social image when uploading posts for their respective photography accounts. For Sangamalli, he reflects that he holds high standards only for himself. For his photography, Tran believes that whatever he posts needs to reflect his “self-standards.”

This sense of dissatisfaction is shared collectively; if Sangamalli is dissatisfied with a photo, he won’t post it, and won’t hesitate to take anything down at a moment’s notice. However, slightly similar to Bassman, his posts are self-assessed and posted for himself.

“I don’t want to offend anyone or hurt anyone on social media, but other than that I’ll post anything I like,” Sangamalli said. “I don’t believe that fear of judgement or anything like that should stop you from posting what you want. It’s your social media, your free expression, your creativity. It shouldn’t be limited by what other people think.”

Ultimately, Tran says that online platforms cannot replace socializing in real life. He believes that people gain much more meeting with each other than communicating on social media.

“[Instagram] might say a couple things about where a person has been and what they’ve done, but it’s not everything,” Tran said. “Nothing is going to replace a real face-to-face interaction or a conversation.”