ue Vida La Mia.” “La vie du bon côté.” “Ai wo bie zou.” These are just a sample of songs that can be heard through the walls of world language classrooms. Despite the differences between the languages, one thing they share is music. Many language teachers teach their students different songs in order to help them learn the language and connect with the culture.

According to Spanish teacher Molly Guadiamos, using songs in the classroom can help with many different aspects of learning a language. The meaning of the song can be interpreted, helping with grammar and vocabulary. It can also help students learn the language in a more native fashion.

“We can go over the meaning of the song, so we can have them take something that’s authentic and figure out what it means,” Guadiamos said. “Songs also tend to use vocabulary or expressions that we haven’t learned in the classroom, so it’s a way to fill in some extra, more native [and] natural Spanish that the textbook didn’t present. It fills in some gaps on vocabulary and usage.”

Junior Sonali Merchia, currently in Spanish 4 Honors, agrees with Guadiamos. She finds that when she sings along, she has better pronunciation and accent.

“When you sing, because you’re singing along to someone else who’s actually singing, it forces you to use or attempt to mimic their accent or their style of speaking,” Merchia said. “We speak differently than native speakers.”

French teacher Sarah Finck describes how music can solidify the accent since music is more memorable.

“It’s really a great way to solidify accent, to hear the rhythm of the language and to have to mimic the way the singers are singing,” Finck said. “Music sticks in your head, so I have students who semesters or years later will say, ‘Oh I remember that expression from a song we did three years ago.’”

“Chinese is a tone language – we have four tones, neutral tones,” Chang said. “When we sing it kinda goes with the melody, so it doesn’t really help with tones. Maybe to some degree but not necessarily in Chinese language. Especially [since] we focus on tones and you don’t get to hear the difference between tones when we sing.”

Despite not helping much with pronunciation, music can still provide other types of aid when learning Chinese. She also explains how if students become interested in the songs, they are more encouraged to learn more.

“I usually pick songs with lyrics that contain the vocabulary or the grammar structure we learn in the class,” Chang said. “That’s number one because there are so many songs, some of the Chinese songs are too difficult for our students to learn, so for the songs I pick, I think that’s going to help them for sure. Also, even for the songs that are difficult, if they are interested, they will try to figure out the meaning of the song.”

For instance, Chang also recalls when some of her students liked listening to a certain artist and bought their album. Although they didn’t know everything the artist was singing, they were willing to figure out the meaning.

However, this is not the main reason Chang uses music in class. She points out that music can help students continue their interest in the language long after taking the class. Specifically, if a student likes a certain style of music, then he or she will continue listening and hopefully learn more beyond high school. This is why when picking what songs to play in class, Chang selects different artists and styles of music.

“I think if I can get them interested in learning Chinese songs it’ll become lifelong learning for them,” Chang said. “When I introduce songs, I try to bring in different [types of songs] so hopefully everyone will like a singer or a particular style and they will continue finding the music. Even if they leave our program, they will hopefully get to continue listening to the music and at least maintain their Chinese to some degree.”

Guadiamos agrees that music can get the students more interested in the music beyond learning the language. She believes that music can help students connect with the culture. For example, if students are visiting a different country, they’re reminded of the songs they learned in class.

“Music is a huge part of any culture, and latin culture music is very big,” Guadiamos said. “I think it’s great to have our students listening to the same song that Latino kids might be listening to. Then they have that in common. Or if they’re travelling and it’s something they might hear. I think kids make a lot of connections.”

In fact, Chang describes her past students who had experiences after high school, where songs allowed them to resonate with the culture.

“Until today, I receive emails from old students saying ‘Hey, I went to China’ or ‘I went to Taiwan last week. I had a business trip and people took me to karaoke,’” Chang said. “‘And then I sang the song you taught me and they were impressed.’”

Many students listen to music they learned in their language classes for pleasure, according to Guadiamos. She recalls a student who had attended concert because she had played a song from that group in class. Guadiamos also remembers a parent who talked to her during a back to school night.

“I had one mom come to tell me, because I talked about using music in class, she said her son still, even though he’s not taking Spanish right now, listens to music in Spanish and sings along with them,” Guadiamos said.

According to Finck, today’s technology makes learning with music outside of the language class easier.

“Now, with all the streaming services, I know that a lot of students pick the song that we have and find a lot of other associated [songs],” Finck said. “I think that some students get even more into that, even after they stopped taking the language, they [can] keep listening.”

Aside from getting students more interested in the language and culture, Guadiamos explains how music brings another element into the classroom, rather than just using the textbook or workbook. 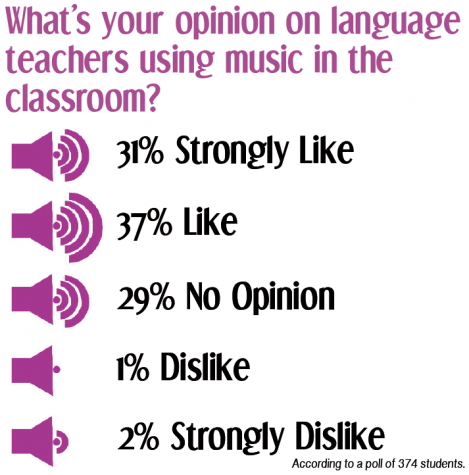 “The enjoyment level with music is better than a conversation or dialogue, since we do a lot of those in the textbook,” Guadiamos said. “Bringing them in just adds another aspect.”

Finck also notices this and describes how  music can be a nice break between serious vocabulary and grammar activities, allowing students to have some fun. In fact, to keep things exciting, Finck has little competitions between classes to motivate her students to improve their pronunciation.

“When I have multiple sections of one level, … I have a playful competition of how well each class sings, volume and mastery of the words,” Finck said. “Of course, there are some parts that are fast, but it’s a non-threatening way, I think, to get them all to engage in something like that.”

Merchia feels the same way, explaining that she feels no pressure to get things right.

“It’s nice to listen to a song where there’s no pressure, the person’s not going to ask you for anything,” Merchia said. “If you have lyrics in front of you, you can just try it, and if you fail, no one really cares because it’s difficult.”

Guadiamos agrees, noticing how students are often excited to learn new songs. According to a survey of 370 students, 68 percent like learning songs in their language classes.

“The bottom line is students really enjoy it,” Guadiamos said. “Once they’ve gone through the song, know what it means, learn pronunciation and practice with that, they sing along. That’s also a good stress reliever […] and brings the class a little alive. Usually, the students look forward to the music.”

Overall, Finck feels that music can bring out different people, be a fun stress reliever and bring the class to life.

“I hope that it’s a little relaxing and it gets [everybody] engaged and everyone’s voice is heard, but it’s different because it’s not their ideas, they’re just singing along,” Finck said. “The music can sweep you up into the language and the culture.”