Down to a science 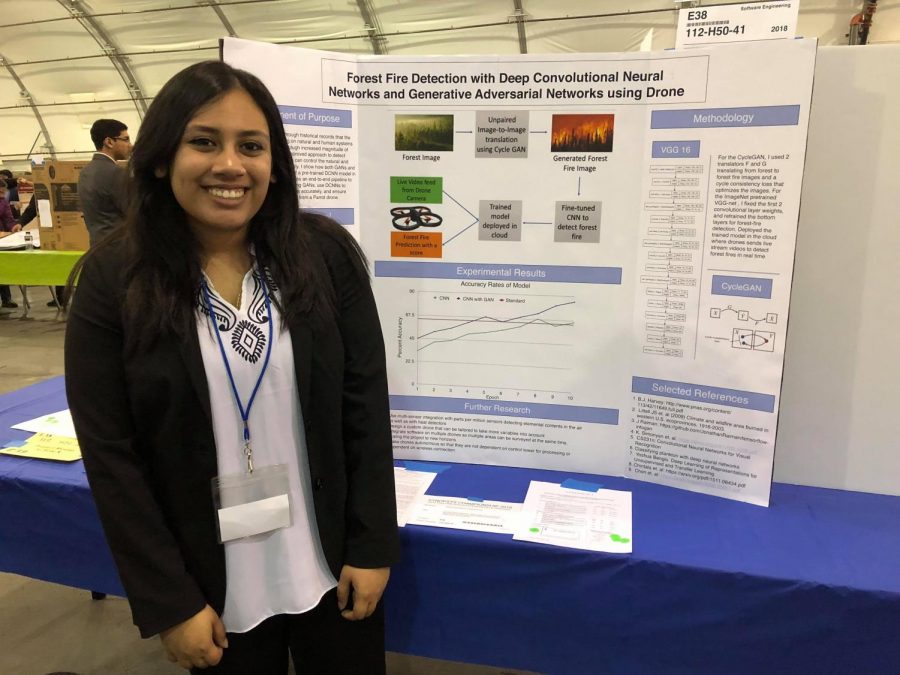 It was a stroke of luck for junior Isha Chakraborty. While she hadn’t quite pieced out the technicalities, she knew her own science fair project was going to revolve around a topic related to forest fires. However, she hadn’t known that her science fair mentor would be a firefighter herself; math teacher and webmaster Debbie Frazier used to be a forest firefighter before she became a teacher.

Over the summer, Chakraborty’s friend lost her house to a forest fire, motivating her to create a kind of classifier, deployed on a drone, that could detect forest fires. She was already interning with Microsoft and knowledgeable about the subjects essential to her project: deep learning, which is a subset of artificial intelligence (AI). For example, she used generative adversarial networks in her project, which allowed her to create her own artificial data to work with.

However, there was still an integral piece of the puzzle missing: a required science mentor, someone who would offer valuable input about her project as she prepared to present at science fairs. At first, Chakraborty had asked Frazier to be her mentor simply because she was an adviser for Technovation, a club Chakraborty is a part of. She also knew Frazier already had plenty of experience mentoring students about their science projects, but it was Frazier’s past career as a firefighter that assisted Chakraborty the most.

“During the course [of] the project, I was focusing more on forest fires that occurred in the larger forest,” Chakraborty said. “But then she told me [and] she actually brought up a good point that a lot of firefighters get called in for fires that are like bonfires, campfires, [and] to be able to tell the difference between those and the difference between those and forest fires, so I thought that was really helpful for my project.”

Frazier considers Chakraborty’s project extremely useful and very exciting, explaining how sometimes a person must walk out for miles and miles into the wilderness to monitor the forest fires. It not only takes time and effort but also leaves many areas unmonitored. Chakraborty, however, had an easy and cheap way to accomplish the monitoring. They met regularly each week, as Frazier advises her students to take an incremental approach to their project and establish regular accountability with their mentors. The process spanned from last summer all the way to February, culminating in the Synopsys Silicon Valley Science and Technology Championship on March 15. Ultimately, she believes Chakraborty did extremely well.

“She’s just wonderful to communicate with, she’s got lots of passion and drive to research,” Frazier said. “[She] was very open about running into barriers and having problems.”

Frazier notes that this quality of perseverance is extremely important in the judges’ eyes. It’s not about getting an A on a test or reaching a certain end goal, Frazier says, but rather about the process itself. Even if they stumble, they need to pick themselves up, dust themselves off and resume the research, a quality Chakraborty exhibited, along with a genuine respect for discovery and research itself.

However, Frazier did assist Chakraborty when it came to writing up the experiment and its results. She believed her extra pair of eyes allowed Chakraborty’s writing to be more clear.

“Her level of communication was a little high for the general audience,” Frazier said. “And while like at Synopsys, judges get to pick their projects, [so] you don’t want to keep a judge or deter a judge from wanting to check you.”

Frazier tried to make Chakraborty’s writing more clear, particularly when it came to the portions about AI. In computer science, Frazier says, it’s important to define your terms and explain. Overall, however, she believes Chakraborty was doing very well. In fact, Chakraborty won a Certificate of Achievement, tour of the NASA Ames Research Center and the American Institute of Aeronautics and Astronautics (AIAA) Intelligent Systems Award at the science fair.

“It was really nice to see her work so hard and get so far,” Frazier said. “She knew it wasn’t perfect, but hey, it was a really amazing amount of work given such a short period of time and research is never perfect, so.”