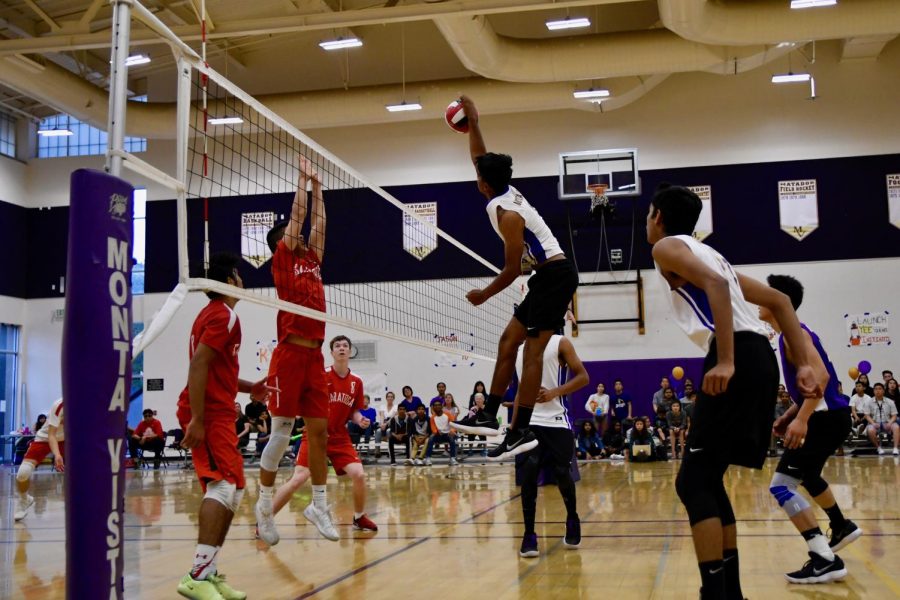 On May 4, banners and posters decorated the sides of the field house, which buzzed with excitement from family and friends. This day marked senior night for the volleyball team and the last home game of the season against Saratoga HS, a team that MVHS had lost to earlier in the season.

Before the game began, the seniors on the team were introduced individually. They were handed flowers and took pictures with family members who had come out to support them. The night started off full of excitement, and the game proved to be even more so.

The Matadors took a strong lead in the first set, and the crowd actively cheered as they watched the team’s great teamwork. Towards the end of the set, junior Apoorv Pachori also had a streak of strong serves that SHS faced difficulty dealing with, ultimately leading MVHS to win the first set with a score of 25-15.

The team had started the game off well with strong play and smooth teamwork. Coach Paul Chiu described the team’s aggressive play in the first set.

“We served well, we passed well, we had very few hitting errors,” Chiu said. “The blocking [that we’ve been practicing] was set up and they were doing the right thing.”

During the second and third set, however, the competition became intense as the score was tied throughout most of the set. These sets were marked by many strong serves and kills from the MVHS team, but also with many out-of-bound hits, missed balls and unsuccessful dives.

In the last minutes of the second set, nervousness and loud cheers of encouragement filled the air. MVHS fell a point behind when one of their spikes hit the net and failed to go over, leaving the score as 25-26. However, the Matadors soon regained momentum as Pachori returned one of SHS’ hits with a powerful spike, bringing the score up to a tie.

The winning points of the set were earned when MVHS tipped the ball over the net to SHS’ formation hole. When SHS spiked out of bounds, the Matadors won the second set of the game by a score of 28-26.

“We had a rough hitting second set,” Chiu said. “We go through these stretches when we make many hitting errors, we were not particularly spot on in the beginning of the second set but we came through and we played some clutch points.”

The Matadors kicked off the third set with a strong lead. However, as the game progressed, their lead shrunk, making the set to be as close as the others were. However, the Matadors finished strong with a powerful spike, winning the set 24-22.

For senior Christopher Liou, the game was nerve-wracking but memorable, as he played as an outside hitter, a role which he is not accustomed to.

“I haven’t hit in forever, so when I first [went on the court] it felt a little shaky, like it’s a new position and it’s been a while,” Liou said, “But you know, after you start to get into a rhythm everything started working out.”

Liou, overall, was satisfied to see his performance improve over the years as he believes he played more confidently and aggressively.

Despite this game being the last home league one at MVHS for senior Jason Shen, he still finds much to look forward to as there are activities in the near-future planned out for the team.

“It was really great seeing other players step up like crazy and it was just a lot of fun being on the court like always,” Shen said. “It’s symbolically like the end of the season for seniors but we know it’s not … we have a big post-season to look forward to for CCS and NorCals, and I just think [the game was] just one more benchmark but we’re not done yet.”

After seeing such close results between their team and SHS, the Matadors are looking to improve during the approaching CCS and NorCal tournaments. For Shen specifically, who had stepped out of the previous season due to an ankle injury, working on recovery was his biggest focus. He believes it makes him a half-step slower on the court, something that could pull him down during the tournaments to come.

“They know what they need to do,” Chiu said. “We’re slowly counting down, and the team’s ready to go.”

Check out the photos below from MVHS’ win over Saratoga HS and senior night. 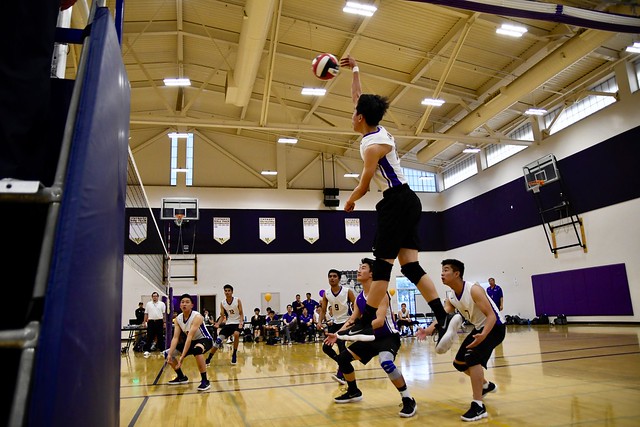