The food trucks selling crepes, the music in the Student Union and the attendance of political speakers from the Cupertino City Council were a few of the many activities that ASB leadership seniors Samantha Millar and Santosh Sivakumar planned for MVHS Action Night on Friday, April 27.

“Action Night is intended to bring political leaders to students,” Millar said. “Some board members are coming, the mayor is coming, the director of constituent services for Ro Khannah is coming to make that connection between students and government and see that they are respected.”

Action Night was primarily held to raise awareness about voting, as well as pre-register as many voters as possible. In order to make this event possible, it had to be approved by the administration and be funded by money from sponsors. To vote, participants needed to be at least 16 years old.

This event was especially important for Millar, who has been a part of Youth and Government, a California YMCA organization that was established with the purpose of engaging young teenagers with politics, for a number of years.

“I’ve really been drawn to the whole aspect that government is what we make it, and if we want change, we have to be the people to make it,” Millar said. “I think Action Night to me is making this community that I have been in the past four years, something that is outside of ourselves.”

In light of recent events revolving around both the national gun control walkouts and the localized MVHS one on March. 14, Sivakumar wanted Action Night to be a time to take action and spread the importance of being a participant in political elections.

“We saw how the whole school really came together for the walkout and how a lot of people really came out to ask where do we go from here,” Sivakumar said. “So we decided to create a civic engagement and voters’ registration drive where the purpose is to promote civic education and get people set up to vote in the elections.”

The walkouts, specifically the March for Our Lives which occurred on March 24, also resonated with Cupertino Planning Commissioner Don Sun.

“On March 24, I personally went to the San Francisco parade with all the students,” Sun said. “That’s the origin of when I thought, ‘Oh, maybe we can do something, team up with the young kids.’ That’s the origin of when I began working with Samantha Miller and also with [the] school district. So we got involved and I personally solicited the money to support this event.”

Sun and his colleagues had over two hundred registered voter forms delivered to the county office. The forms were gathered from multiple schools within FUHSD.

The planning of the event began several months prior with Millar and Sivakumar consulting with Sun and others before proposing the idea to administration. Many of the organizations and people consulted were also asked to speak for the event.

One of those consulted was the organization League of Women Voters. Representing the league was the Director of Membership for the Cupertino-Sunnyvale faction, Rosemary Serio.

“I think it’s wonderful,” Serio said. “I’m really proud of this current group of young adults that have chosen to take a stand against a condition that has been a cancer in our society for a long time, and they organized themselves.” 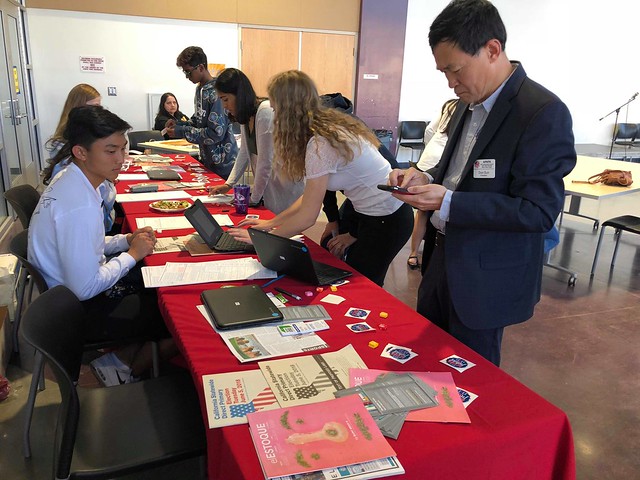 As Sivakumar planned for the event, he revealed his belief that it is not the number of students who choose to be engaged in Action Night that is the most important aspect of the night, but instead, it is the fact that being able to successfully bring the opportunity to vote on campus that is most influential and critical.

“We’ve had a great time organizing it,” Sivakumar said. “If we get more [participants], that would be incredible, but any impact that we can make is substantial.”