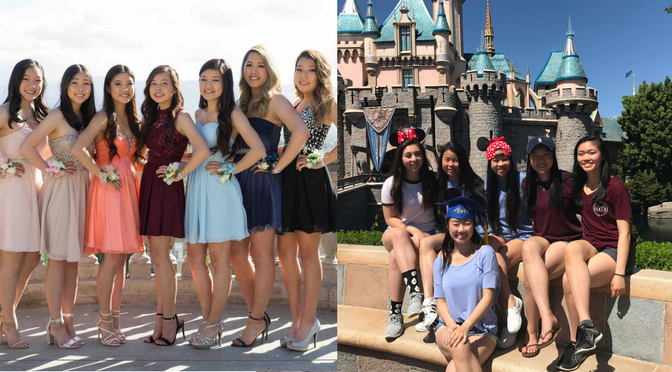 The Marquesas are preparing to compete at the USA Dance Nationals in Anaheim on March 30 and 31, which marks the end of their competition season. But as the juniors on the dance team get ready for championships, their friends are preparing for another event on March 31 — junior prom.

“When I first found out the day of Nationals, I didn’t think it was a big deal, just because I didn’t remember how junior prom was such an eventful event,” junior Sabina Law said. “I was just like ‘oh junior prom is the same day, its not a big deal.’”

Junior Jasmine Tsai agrees with Law that there’s a lot of hype surrounding junior prom, and thinks it led to her initial disappointment upon finding out that she wouldn’t be able to attend.

“As a sophomore or a freshman coming into high school, you kind of see the upperclassmen going to junior prom and stuff like that and it’s such a big deal with the promposals and [the limousines in the rally court] sometimes,” Tsai said. “So I think it’s very exciting, the whole thing, and prom in general is just something you expect to go to for your high school memory.”

But now, Tsai says she feels less upset than she did at first — she found out that not many of her friends are going, and that her boyfriend hadn’t really wanted to attend prom either. Besides, she’s looking forward to Nationals and the bonding experience that comes with it.

“I think that there are more opportunities to make memories elsewhere,” Tsai said.

Since prom is considered a part of the typical high school experience, both Law and Tsai were both disappointed when they found out they wouldn’t be able to attend. But since Law already went to junior prom last year, she says that missing prom might be a bigger deal for others than it will be for her. Yet there’s still a bit of sadness that comes with watching all her friends plan for it, knowing that she won’t be a part of that.

“It’s kind of sad just because all of my friends are going, and I’m not really a part of it because they’re all planning stuff,” Law said. “I’m just listening to it and not really doing anything for it.”

But for both of them, Nationals is the most important thing on their minds. And whether it be visiting Disneyland, competing again with the hopes of winning a third consecutive national championship in the Kick division or just bonding with their teammates, there’s plenty to look forward to.

“I feel like Nationals to me will be and is more important than junior prom just because dance has been a really big part [of my life,]” Law said. “And not going to [junior prom] shouldn’t really matter because there’s always senior ball.