A look back: Girls soccer team closes out season with dominant victory 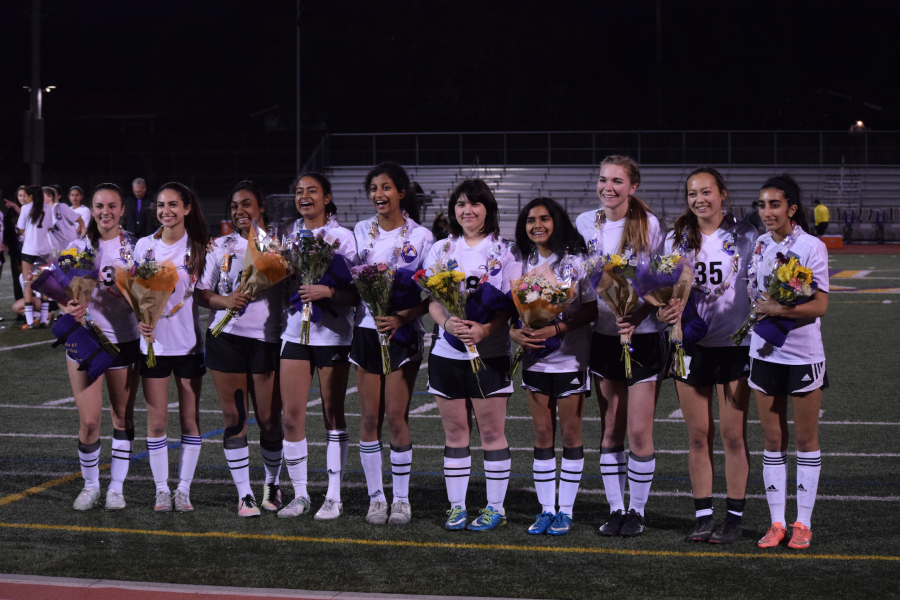 hen the 10 seniors on the MVHS girls soccer team took the field on Feb. 16 for the final time in their high school careers, emotions were mixed. They were nostalgic, remembering all of the times that they joked around with their friends and the quirky traditions they formed over the years. Still, as they closed out one of the best seasons of their MVHS careers, their minds were focused on making this game one to remember. And, after a 4-0 senior night victory against Wilcox HS, the girls felt that they had left it all on the field.
Before the game
The bleachers were decorated with multi-colored posters honoring all 10 seniors as streams of spectators piled into the stands. The team took a break from their warm-up to form an aisle for the seniors and their parents to walk through to be honored for their commitment to the team. As they walked down the aisle, they were presented with flowers as juniors Kiran Gomatam and Mythili Ketavarapu read their bios to the crowd, relaying their accomplishments, hobbies and plans for after high school.

After all of the seniors made their way across the field, they posed for a picture with their families and returned for their last warmup.

Click through the pictures below to see the seniors’ thoughts on their final game. 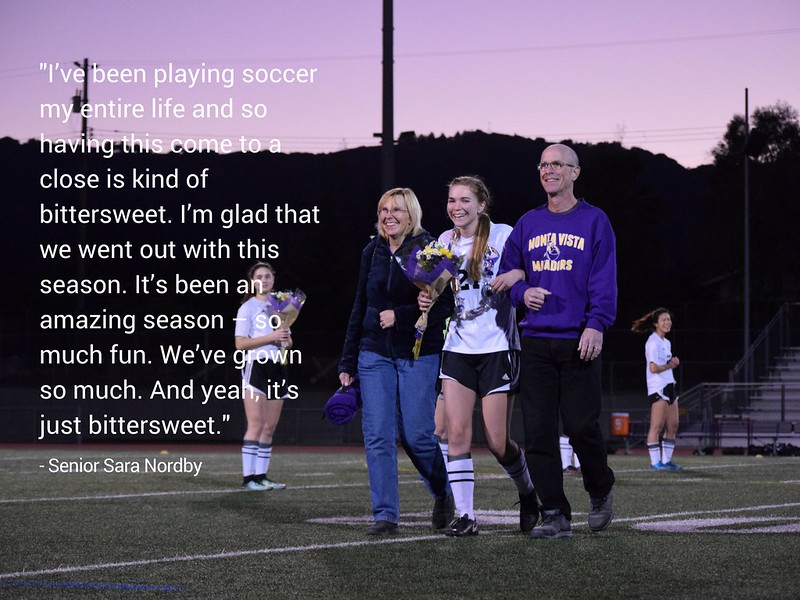 Photos by Akshara Majjiga
The Game
It was clear that the seniors were eager to make their marks on the game from the start. The first of their four goals was scored in the first six minutes by senior Emma Lam. This goal set the tone for the remainder of the game as MVHS dominated the game through 80 minutes.

Freshman Hana Foster and junior Samantha Chan added two more goals in the first half at 15 and 27 minutes respectively, allowing MVHS to enter halftime with a 3-0 lead.

Although the Matadors continued to control the game in the second half, they weren’t able to capitalize on opportunities until the closing minutes.
The End
With six minutes left in the game, sophomore Jaimie Chan scored off of an assist by senior Nanda Nayak, who was taking an indirect free kick. In the final three minutes of the game, head coach Jose Vargas put all 10 seniors into the game, with only one underclassman on the field.

The seniors played with passion, but their night was cut short when suddenly the lights on the field went out with a minute left in the game. As the seniors groaned in disappointment, fans on the MVHS side of the field turned on their phone flashlights and chanted in support. After a discussion, the coaches decided to end the game with a minute still left on the clock, and the seniors ran across the field to the stands, embracing their friends and families on the other side. In the dim lights, the girls took pictures with their fans and their posters.

The team ended their season with a 6-3-3 league record, their best in years.