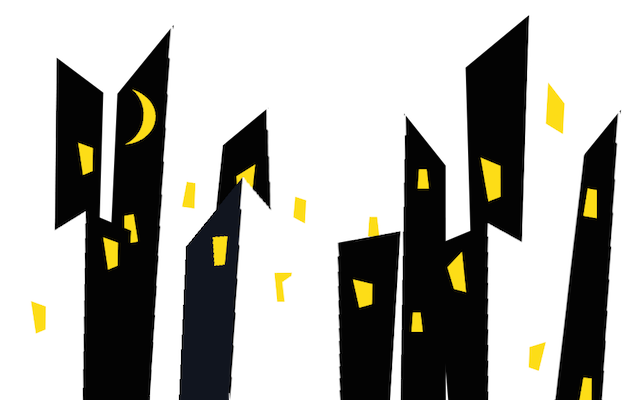 he show never stops for MVHS drama students; even though they have just finished SNL performances, the department’s newest schedule has propelled them as the spring musical — “Urinetown” — is right around the corner.

Despite drama teacher Sarah Capule’s maternity leave, the drama students are pushing through — building sets, rehearsing lines and practicing dance routines — as deadlines creep closer. But the students are not alone — substitute drama teacher Jeffrey Adams has come to lead the department and direct the upcoming musical.

Adams has worked primarily as an actor, appearing in works such as “Into the Woods” with the San Francisco Playhouse Company and “The Addams Family” with the San Jose Stage Company. However, he has also taught at various Bay Area high schools, such as Bellarmine College Preparatory, and directed various student performances in the past. What stands out the most about MVHS students to Adams is their work ethic.

“ Something I’ve found at [MVHS] is that the students are incredibly self-sustaining,” Adams said. “They do a lot of the work themselves from set-building to character analysis. They are very prepared for shows, which is very helpful as the director.” 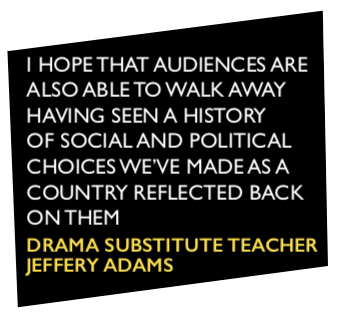 people in the city to pay to use them. Those who do not pay or use a facility not controlled by the corporation are taken to a place called Urinetown. It is not until the main character Bobby (played by senior Alberto Haro) realizes the system is flawed that he starts an uprising against the company.

For Haro, this year’s performance will be his first ever musical. In addition to helping with his acting skills, Adams has created a bright atmosphere for the class, according to Haro.

“He’s done acting before, outside of this, so it’s good to know some more stuff from someone who’s actually had larger scale experience,” Haro said. “He [also] has a good sense of humor. The class is always making jokes with him. It’s a lot of fun and he’s a really good director.”

In addition to Adams, the musical production team has two new members: choreographer Claire Calalo and vocal director Monique Hafin. Although Haro’s character does not dance as much as the background characters, Haro says Calalo always keeps the cast on its feet and has made the whole process enjoyable for him, despite the difficulty.

However, the ability to sing is an important part of his role in the musical, and Hafin has helped Haro improve in this area.

“[Hafin has] helped me realize more of my vocal range,” Haro said. “This is actually my first musical, so I didn’t really know how to sing properly before this.”

Junior Bryce Nevitt, who plays the role of Old Man Strong, has also found it to be a smooth change between teachers.

“All of us, I think, can agree [that] it’s been a pretty easy transition, ” Nevitt said. “[Adams is] a really funny guy, he’s really sociable [and] really good at what he does. 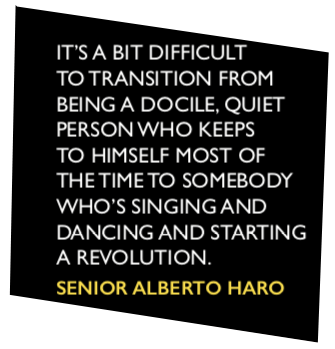 As Haro describes himself as a relatively reserved person, he says that one of the greatest difficulties he has faced with his role as Bobby is getting into character.

“I’m not very outspoken. I’m not one to start a revolution like Bobby would,” Haro said. “So it’s a bit difficult to transition from being a docile, quiet person who keeps to himself most of the time to somebody who’s singing and dancing and starting a revolution.”

Although he says he starts off rehearsals a little shaky, Haro has found that cracking jokes and talking with friends helps him warm up. Through this, he has been able to gradually build character as he enacts the scenes and sings along.

Although Adams says the name of the play makes it seem funny and satirical on a surface level, he specifically chose this play because of its underlying messages.

“I wanted it to be something that pushed the boundaries a little more,” Adams said. “I look for teachable moments in the theater, and I think to be able to choose a show that is socially relevant and has political commentary and talks about social class and government oppression, especially now in 2018 — I thought it was the perfect time to do the show.”

The main problem the production team has run into, however, is the issue of time. With over 40 songs and 110 pages of material, the team has had difficulty scheduling for all the various components of the musical.

According to Adams, the one-week break in the middle of February along with SNL production added more scheduling complications, and what is supposed to be a two-and-a-half month period of preparations turned into the equivalent of roughly three weeks. Although it can be stressful, Adams says he is grateful for the drama students who are able to carry a lot of weight during this busy period.

Adams’ overall goal is for the musical to be applicable to modern society — to highlight its flaws and successes. After all, the play is just that: social commentary.

“I hope that audiences are also able to walk away having seen a history of social and political choices we’ve made as a country reflected back on them, so they’re able to see that — laugh at that, yes, but think about it in a critical way,” Adams said. “It’s more than just satire.”