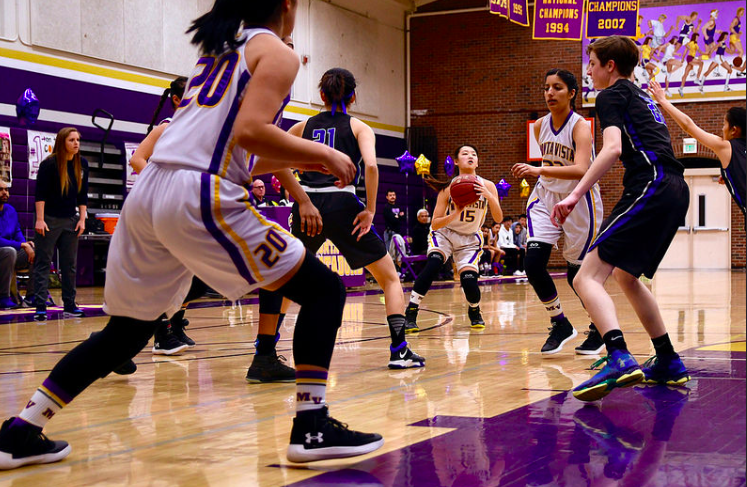 uring the warmups leading up to their senior night game, the three seniors on the girls basketball team came out onto the court wearing bright yellow shirts with one bold word written across: chicken. The shirts, which also had small drawings of chickens along the sleeves, were part of an inside joke from earlier in the season.

“Basically it was like halfway through the season and [junior Jessica Ji] was just like ‘Guys, I want to have a pet chicken,’” senior Joyce Chen said. “And we just [started calling] each other chicken, so that’s just our team – we’re a team of chickens. So they made us chickens for senior night.”

This inside joke was a good representation of the atmosphere in the gym during the game against Los Altos HS: the players were cheerful and had quite a bit of team spirit, yet the focus still remained on the upcoming game.

“This night [was] more about the game, but it [was] also about enjoying the company of our teammates, our friends and family,” Chen said.

The game, which started after a brief senior night ceremony, started off roughly for the Matadors. The team struggled to convert their passing and offensive movement into points, missing countless layups and easy shots early on. They turned the ball over more often than usual, and had some difficulty stopping the LAHS offense.

However, they were able to recover, and the game came down to an extremely close fourth quarter before MVHS ultimately lost 45-46. Click through the timeline below to see the big plays from the final minutes of the game.