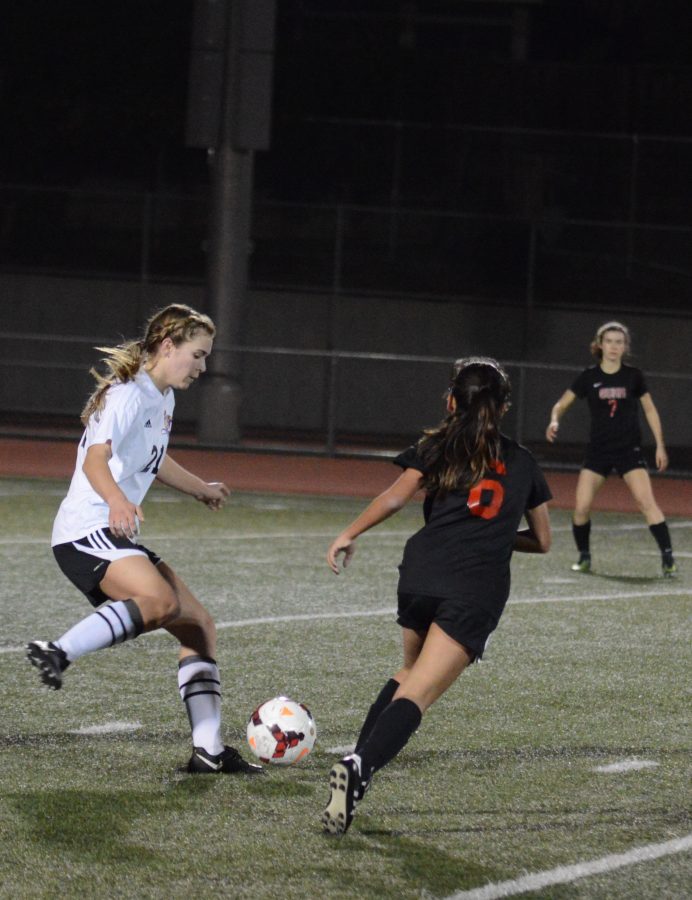 On January 26,  a cold Monday night, with a fire alarm blaring in the middle of the match, the MVHS girls varsity soccer team hoped to continue their better-than-expected season. After a lackluster season last year with a 1-10-1 record, the team has bounced back and has a chance of making it to CCS.

After beating Gunn HS 2-0 on their field, GHS was out for blood — beating MVHS with the same score of 2-0 with two improbable goals. Senior Rebecca Nordeen talks about the feeling of playing a team twice in back to back games.

“We knew the other team was gonna be pretty upset and pretty angry,” Nordeen said. “They wanted to beat us and so they were gonna be a lot harder and angrier.”

Towards the end of the first half, both offenses came into their own, with MVHS and GHS making runs to their respective goals. But with good goalkeeping on both side the score remained 0-0. With only a few minutes left to go in the first half, GHS was awarded a corner kick. The shot on goal was cleared away, but senior and goalie Gabby Campbell could not block the second kick by GHS, putting GHS up 1-0 by half-time.

“Honestly I think I did everything I could,” Campbell said. “None of those goals I think I could have gotten.”

MVHS at the beginning of the second half started playing better offensively . The team got the ball in the final third of the field but weren’t able to score any goals. After the first few minutes of the second half, GHS seemed to be on the ropes, until a GHS player came on the counter attack and scored a difficult lob from way outside the box. This put the score at 2-0 in favor of GHS.

The following part of the second half consisted of the home team frantically trying to equalize the score. They sent many players forward an

d played aggressively, trying to create opportunities to score. However, GHS’s defense held strong and MVHS could not get past it.

With a flurry of offense MVHS tried to will themselves to a tie. They came close a few times with two shots glancing right off the top crossbar, with both almost goals breaking the team’s spirit.

“It’s so bad [to watch] especially in the back,” Campbell said. “Watching everything go down its hard to see them not in the back of the net, but there’s nothing you can really do.”

The game ended in a 2-0 loss, a reversal of the score from their previous game against GHS on Friday, Jan. 26. Even with the loss, the girls team is still in contention to make CCS, a great improvement from last year. Head coach Jose Vargas weighs in on the team’s growth.

“We’ve accomplished our goal so far,” Vargas said. “So now we’ve set a new goal of trying to get into CCS you know as long as we keep putting up good stats we have a chance.”