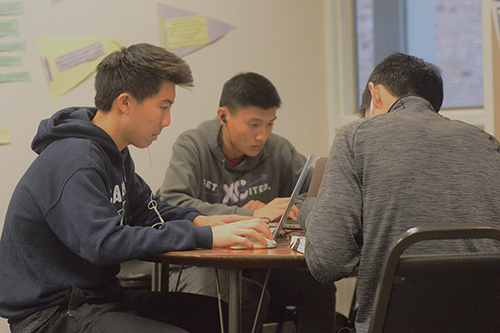 Jennie Chen
hen McKenna Parfet took the long-time substitute position for college and career advisor in mid-September, there were many changes and additions she envisioned making to the College and Career Center (CCC). One of the changes was hosting Free Application for Federal Student Aid (FAFSA), and college app workshops, which took place every Thursday during tutorial in the month of November.

However, despite sending out emails and posting reminders on SchoolLoop News and Naviance, Parfet only saw two or three seniors attend the tutorial sessions each week.

“Ideally, I would have liked to see a lot of seniors come in, [but] that’s not exactly what happened,” Parfet said. “There were a couple and I was really happy about that, but ideally it would have been filled with seniors all working on [college applications] together.”

For the seniors who did come, Parfet was able to help them with questions about terms and tax information on the FAFSA, which seniors need to fill out when applying to college to be eligible for need-based aid. Otherwise, Parfet feels that students mostly had the hang of it, and were more looking for a place to settle and work on their applications.

Senior Joyce Chen saw the information about the sessions on SchoolLoop, and decided to sign up on Naviance to be able to work more on her applications and get help. Chen knew she was moving in a couple of weeks, and wasn’t sure which address to put on the residency portion of her CSU application. Parfet was able to help her, and also answered questions like where to find her state student ID.

“It’s nice being able to talk to someone who can answer all your questions immediately, because I tried doing it on my own but there’s always small things [and] you’re just like ‘What the heck? How do I fill this out?’” Chen said. “You just waste extra time Googling it and then you don’t really get a clear answer. So I like the idea of having someone to be there to answer all of my college questions right away.”

While Chen hadn’t really visited the CCC until this year, the CCC was a place senior Jeffrey Xu usually worked on homework, so when he saw announcements that the center would be open to seniors working on college applications, it felt natural for him to come in with his friends.

“College apps [are] very mentally taxing,” Xu said. “You have to sit down and be like ‘Oh, I’m going to do college apps right now for the next half an hour.’ And that’s the only way to get it done so [these sessions] are nice.”

Xu attributes the low turnout to many students still not knowing what the CCC is for and being scared to enter. However, he believes that Parfet is making the CCC a more accessible place for students, and that it’s only a matter of time before more students start utilizing the CCC.

“I think [it’d help] if [Ms. Parfet] reached out [and] had the [senior] class officers post on their Facebook group like ‘Hey guys, Ms. Parfet’s having this workshop, come out today,’” Chen said. “I think people seeing that the people around them are also doing the same thing would help get more interest.”

Parfet hopes to continue the tutorial sessions in following years, with some improvements.

“There’s definitely some things I can do to reach more students that I’ve been looking into, like doing the announcements as well,” Parfet said. “I’ll [also] be getting a sandwich board to put out front of my room to also advertise events and stuff that is going on in here.”

Although her role is mostly geared towards working with juniors and seniors, Parfet also hopes to have more freshmen and sophomores visit the CCC. One way to do so, she believes, is to involve them in more career exploration opportunities.

“I’m just trying to make it a bright, fun place for students to be,” Parfet said.