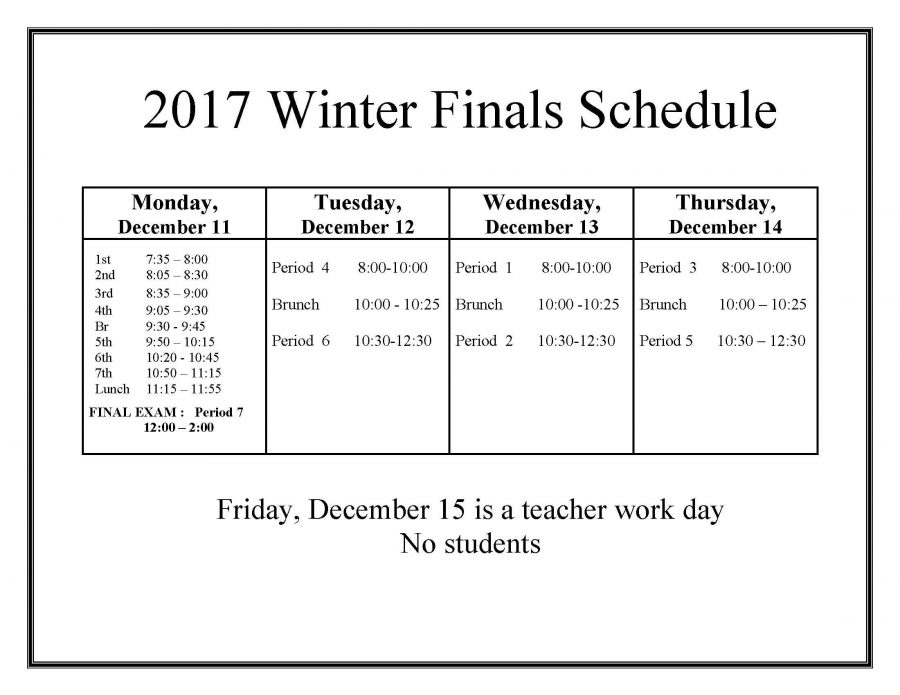 Anirudh Chaudhary
his semester, students’ finals schedule were like nothing they had ever seen before. On Dec. 11, students will arrive at school for their first period classes at 7:35 as usual. However, this was followed by 25 minute periods, right before their seventh-period final after lunch.

Junior Heewon Chung was confused when he first saw the new finals schedule.

“What’s the purpose of this?” Chung said. “We’re getting twenty minutes to do absolutely nothing in seven classes and then we take the final. That seems kinda pointless […] I guess it’s good social time.”

Chung does not feel that the extra time provided by MVHS before finals is going to be beneficial or provide any use to students.

However, principal April Scott explained her rationale behind the construction of the different finals schedule this year.

The reason for the new finals schedule is three-fold according to Scott. The state of California demands that public high school students have a minimum of 16,800 instructional minutes each year. Because sophomores and juniors have standardized testing during the spring, the school needed to compensate somewhere else.

The second reason is that a couple years back it was agreed amongst students, faculty and administration that students should have no more than two finals on any given day. Because more students have a free seventh and first period than any other period, first and seventh-period finals could not stand alone, which is why now there is class before the seventh-period final.

The third reason is that teachers have been repeatedly asking for time before finals to touch base with their students. This wouldn’t require an entire period, but teachers still wanted a short amount of time dedicated to last minute concerns or questions students have about their finals.

Science teacher Kyle Jones has different agendas for both the classes he teaches.

“My Bio classes are going to be doing review, pretty standard,” Jones said. “For my APES class, we are continuing on watching a documentary on agriculture.”

After hearing about the reasoning behind the schedule difference this semester, Chung still didn’t feel this time was going to be useful to him.

Jones, however, believes that the extra time to with students will be helpful.

“I think it could be helpful,” Jones said. “Especially if students have studied over the weekend and they want to ask some questions, it’s a good moment for them to guarantee time.”

When asked what he would do with the extra time given to him, Chung said, “Catch up on sleep.”